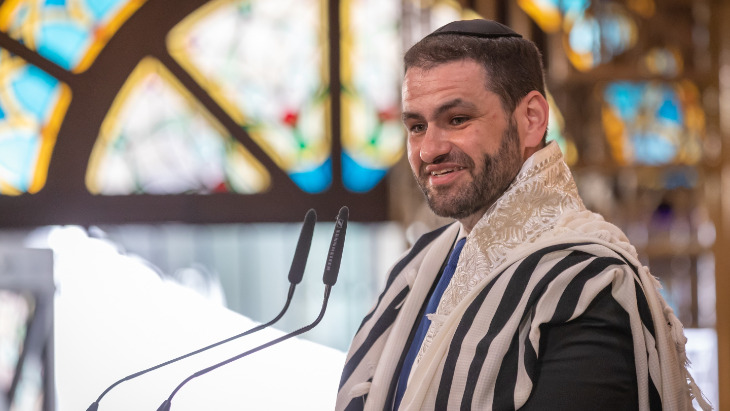 An exclusive interview with Rabbi Zsolt Balla, who’s just been installed as Germany’s first Jewish Chaplain in over a century.

For the first time in over a hundred years, the German military has a Chief Rabbi. Rabbi Zsolt Balla, a popular congregational rabbi from the German city of Leipzig, was installed as a military chaplain on Monday, June 28, 2021. The Bundeswehr, Germany’s army, hopes to have ten Jewish chaplains working alongside their Christian counterparts to provide pastoral care for German soldiers.

Before his installation, Rabbi Balla spoke with Aish.com, explaining his life story and sharing his hopes for rebuilding Germany’s Jewish community.

A native of Budapest, Rabbi Balla’s family kept their Jewishness a secret for years. During his early childhood in Communist Hungary, Rabbi Balla’s mother never mentioned that their family was Jewish.

This decision stemmed from unimaginable trauma. After Germany invaded Hungary in 1944, Rabbi Balla’s grandparents, like other Jews, were targeted for murder by the Nazis. Thanks to the kindness of non-Jewish neighbors and benefactors, they managed to evade the Holocaust that killed 565,000 Hungarian Jews. 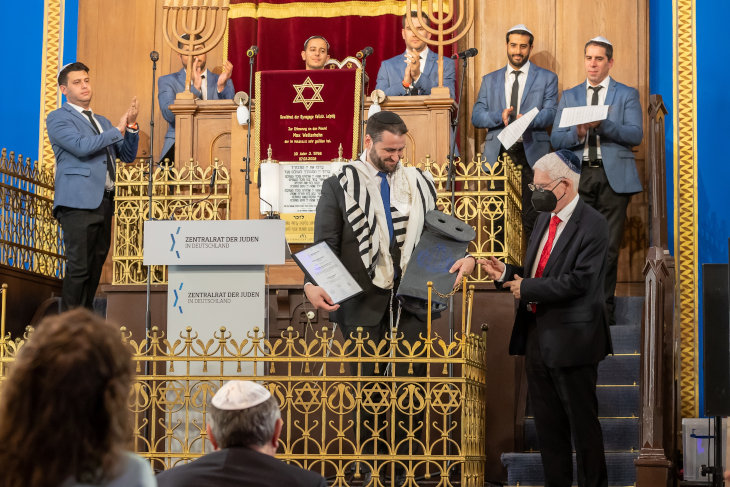 Rabbi Balla’s grandfather worked as an electrician and was much loved by his non-Jewish neighbors. During the Holocaust, they helped him hide in the attic of his workshop. Rabbi Balla’s grandmother and his mother were saved by the Swedish diplomat Raoul Wallenberg. Wallenberg was posted to Budapest, where he did all he could to save some Hungarian Jews. He issued Swedish protective passports to Jews – including to Rabbi Balla’s mother and grandmother – identifying them as Swedish citizens. Wallenberg managed to save over 11,000 Hungarian Jews in this way. (Arrested by the Soviets at the end of the war, he died in mysterious circumstances in a Soviet prison some time after the war.)

By the end of World War II, Rabbi Balla’s mother and grandmother were sheltering in a basement, hiding from the brutal fighting that engulfed Budapest. “My mother’s first memory in life is of a Russian soldier coming into the basement and freeing them,” Rabbi Balla notes. “The first three years of her life were in hiding.”

His father didn't attend the bris so that he could have some plausible deniability in case it was discovered.

Growing up, Rabbi Balla loved reading the Bible, entertained by its many colorful stories and narratives. In 1998, when he was nine years old, he recalls that “everybody knew the (Communist) system was over” and that change was on the horizon. A local Roman Catholic church announced that it would offer Bible classes, and Rabbi Balla asked to go.

Instead of agreeing, his mother explained their long-hidden family history. Rabbi Balla had a sense of coming home: “I was fascinated by it,” he recalls. He relished learning details about his family history and Jewish life. “It was like reading a book and finding out it was about your family.” He discovered that his grandfather had been a Levy.

“In the 1990s, there was a great wave of returning to Jewish life in Hungary," Rabbi Balla remembers. “There were three Jewish schools in Hungary alone," set up after the fall of the Iron Curtain. Rabbi Balla attended a Jewish high school that was established by the Ronald S. Launder Foundation. The school had over 300 Jewish students, all discovering Judaism for the first time.

His Jewish journey was helped by a network of Jewish summer camps run by various Jewish organizations in Hungary – particularly Camp Saravas, also run by the Ronald S. Lauder Foundation. The camp brings together hundreds of Jewish kids from across Europe to spend a summer in a Jewish environment in Hungary. “I knew I was Jewish but I didn’t do yiddishkeit,” Rabbi Balla explains, using the Yiddish word for adopting a Jewish lifestyle. When he was 17, he decided to start incorporating more Jewish practices into his day to day life.

He began by going to synagogue each Monday and Thursday when the Torah is read, and praying with tefillin. From there, Rabbi Balla’s commitment to Jewish practice grew, incorporating Jewish holidays and Shabbat. When he was 23 he enrolled in the Rabbinerseminar zu Berlin, Germany’s sole Orthodox rabbinical school – an heir to a famous rabbinical academy that was closed by the Nazis in 1938. He received rabbinic ordination in 2009.

Unlike many Orthodox rabbis, with the exception of one year spent living in Israel, Rabbi Balla has lived his life in Continental Europe. That gives him a perspective on the needs of European Jewry.

As he was increasing his Jewish involvement, Rabbi Balla became friends with a wide group of other young European Jews who were also discovering their Jewish identities. Many of these Jews were from the former Soviet Union. Since the end of the Soviet Union, over 100,000 Soviet Jews have settled in Germany, revitalizing Jewish life in the country.

“I never thought I would marry a Russian-speaking girl,” Rabbi Balla chuckles, but when he met Marina, who’d moved from the Soviet Union to Leipzig with her family when she was 13, he realized he’d found his life partner. Like him, Marina was determined to help nurture Jewish life in Germany. They married in 2007 and moved to Leipzig in 2010, where Rabbi Balla assumed leadership of the Synagogue Leipzig, one of only two synagogues in the German state of Saxony to survive the Holocaust intact.

The vast majority of Leipzig’s 1,300 Jews today are Russian speaking, including his own children. He’s been asked why Jews live in Germany and why he stays to minister to this community. He answers with a question of his own.

“What if about 25 years ago, God came to you and said, ‘I have 150,000 former Soviet Jews: where should I take them?'” Rabbi Balla points out that some non-European Jews might suggest that this massive community of Jews would have been better off in Israel or the US or Britain or other sites.

“But God didn’t ask you,” Rabbi Balla notes. “He put them down in Germany.” Now that such a large community has put down roots in Germany, he feels an obligation and an excitement to help these Jews grow.

Moreover, Rabbi Balla points out that other places with a robust Jewish community, such as the United States, were once considered less desirable places to live a fully Jewish life. “You have no idea how this is working out in the long term," he points out. “I have to do all my part to help it flourish."

German Jews have found themselves under fire in recent years. Anti-Jewish hate crimes rose sharply last year. In 2020, there were 2,351 anti-Semitic crimes directed against German Jews. A recent German report found that neo-Nazis were responsible for most of the crimes, though Muslim immigrants have also been responsible for many attacks. One of the most high profile incidents came in 2019, when a neo-Nazi shot two people as he tried to break into a synagogue in the city of Halle on Yom Kippur.

Nazism remains a persistent problem. In 2020, Germany partially disbanded its military’s Special Commando Forces (KSK) after members were found to have made Nazi salutes and pledged allegiance to neo-Nazi precepts. In 2021, an elite police unit in Frankfurt was also disbanded after officers were found to have expressed neo-Nazi remarks and shared Nazi symbols in group chats. In 2021, a German army officer went on trial for planning attacks while posing as a Syrian refugee in order to whip up anti-immigrant sentiments. 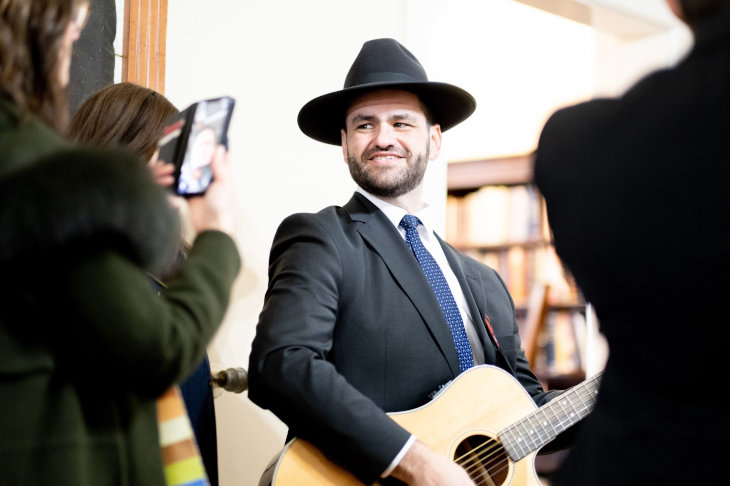 German Interior Minister Horst Seehofer has said that anti-Jewish crimes are “not only worrying but also deeply shameful against the background of our history.” Germany’s Minister of Defense, Annegret Kramp-Karrenbauer, has said that she hopes Rabbi Balla’s appointment will prove to be a “contribution against growing anti-Semitism, extremism and populism in society.”

For Rabbi Balla, Germany’s anti-Semitism crisis isn’t only a German problem, it’s part of a growing threat against Jews world-wide. He points out that American Jews too have been buffeted by the same extreme Jew-hatred that exists in Germany. “It would be very dangerous to see this as only a German problem. When it comes to anti-Semitism, we are all in this boat together"

While the number of Jews in the German army is miniscule – estimates put it at between 80 and 300 soldiers – Rabbi Balla will minister to all soldiers, helping them maintain religious traditions.

“My goal is very simply to strive to establish an environment where being a Jewish soldier in the German army is as natural as in any other modern NATO country.” He explains that a key part of the Bundeswehr today is for all soldiers to go through ethical training so that they will never repeat the brutality of the Nazi years. “I and future Jewish chaplains in the army will have to play a very active role in this. We are all responsible for each other.”