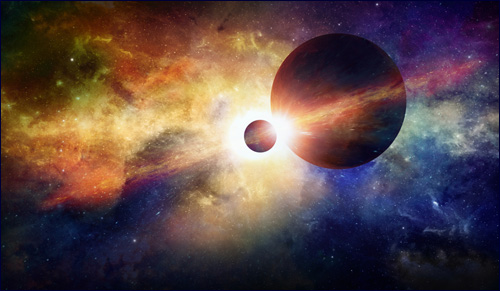 NASA's earth-shattering announcement has many Jews asking: Does Judaism entertain the possibility of alien life?

Hello… Anybody else out there?

For us here on earth it is certainly one of the most intriguing and far-reaching questions imaginable. Are we alone in the cosmos or are there others – perhaps like us or perhaps totally different – somewhere in the universe?

And for those of us who believe the account of creation as recorded in the Torah, are the opening words – “In the beginning God created the heavens and the earth” – meant as full disclosure of the creation of life by the Almighty or is this merely the information granted to earthlings as necessary for our relationship with God but not purporting to reveal other manifestations of divine power and creativity?

In short, can religious Jews believe in the possibility of alien life?

The question which until now was purely theoretical in nature may just have assumed forceful relevance in light of this week’s world shaking announcement by NASA. To their great amazement astronomers have just found seven Earth-size planets which seem suitable for life.

Life, they have now concluded, may have evolved on at least three planets in a newly discovered solar system just 39 light years from Earth. Astronomers have detected no less than seven Earth-sized worlds orbiting a cool dwarf star known as TRAPPIST-1.The six inner planets lie in a temperate zone where surface temperatures range from zero to 100C. Of these, at least three are thought to be capable of having oceans, increasing the likelihood of life. No other star system known contains such a large number of Earth-sized and probably rocky planets.

British astronomer Dr Chris Copperwheat, from Liverpool John Moores University, who co-led the international team, said: "The discovery of multiple rocky planets with surface temperatures which allow for liquid water make this amazing system an exciting future target in the search for life."

According to Judaism, is this in the realm of possibility? Can we conceive of other worlds whose inhabitants also share a special relationship with God? And from the sublime to the ridiculous, will these aliens from outer space be Jews, observe Torah laws, build synagogues and places of worship, and collect money for charitable purposes?

If from an egotistical perspective we consider human kind the only ones worthy of God’s special attention we might readily conclude that “this is all there is.” And that is what many rabbinic sages believed. What is fascinating however is that a significant body of opinion in traditional sources not only validates the possibility for alien life on other planets but actually finds biblical and midrashic confirmation for this view, even as it suggests that belief in an all-powerful God forbids placing any limitations on the extent of his creative powers.

Dr. David Weintraub, professor of astronomy at Vanderbilt University and the author of Religions and Extraterrestrial Life: How Will We Deal With It?, affirms that Judaism is spiritually prepared for little green men. “Judaism accepts the possibility of extraterrestrial life. Jewish theology may actually require a belief in extraterrestrials since there are no limits on the power of the creator. Thus, for Jews to say that no life beyond the Earth could possibly exist would be unacceptable, as such an idea would appear to place shackles on God’s creative power…the universe belongs to God and God can do what God wishes to do with the universe.”

Going back many centuries, the great Jewish philosopher Hasdai Crescas (1340-1411), in his classic work Ohr Hashem, wrote an entire chapter in which he maintained that the possibility of life on other planets is not in conflict with Jewish belief. Moreover, Torah sources in fact offer support for them. He invoked the words of Psalm 19:2: “The heavens declare the glory of God” – the rich cosmic landscape with all of its wonders continues to impress us with the infinite possibilities of God’s creations.

As further evidence for the possibility of extraterrestrial life, Crescas mentions the Talmudic teaching that “God flies through 18,000 worlds” [Babylonian Talmud Avoda Zara 3B]. Furthermore, Psalm 145:13’s statement that "Your kingdom is a kingdom spanning all olamim (worlds)" could imply the existence of extraterrestrial life, since if there were no existence on these other worlds, what kind of kingdom would God have?

Another biblical allusion to alien life are the words in the song of Debora in the book of Judges: "Curse Meroz, said the angel of the Lord, curse bitterly its inhabitants´[5:23] In his book Sefer HaBrit ('Book of the Covenant'), Rabbi Pinchas Eliyahu Horowitz, (18th century ) quotes as his authority a clear Talmud reference –the statement that contends that Meroz is an inhabited planet somewhere in outer space. Furthermore, he affirms emphatically that God created an infinite number of worlds, of physical, spiritual and inter-dimensional nature. This view is upheld by the Ari'zal (Rabbi Yitzchak Luria), who also spoke of an 'infinite number of spiritual worlds'.

What was left unsaid by the sages willing to accept the possibility of life on other planets was a further description of what these beings are like, what relationship they have to the Almighty, by which laws if any they are governed, in what “image” they were created, and most fundamental of all whether they share with us free will, the capacity for independent choice, which we as humans have been granted and which allows us the descriptive of being created “in the image of God.”

"For you to sit here and say there is no life outside of planet Earth is to put limitations on the Creator."

We simply do not know the answers to these questions. But in terms of our openness to the questions and our willingness to pursue them we might well ponder the response of the Lubavitcher Rebbi to Dr. Velvl Greene, a prominent microbiologist who years ago was enlisted by NASA in their project to determine if there is life on Mars. Dr. Greene asked the Rebbe privately if this was something he should be doing. The Rebbe replied, “Dr. Greene, look for life on Mars! And if you don’t find it there, look somewhere else in the universe for it. Because for you to sit here and say there is no life outside of planet Earth is to put limitations on the Creator, and that is not something any of His creatures can do!”

New insights into the wonders of the universe can bring us a step closer to greater love and understanding of God.

Marijuana and Judaism: What Does Jewish Law Say about the Subject?

World Repairs
Blessing on Chewing Gum
Was Rahab a Prostitute?
Extras In Our Own Epic
Comments
MOST POPULAR IN Current Issues
Our privacy policy