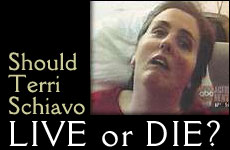 It is a denial of the Jewish ideal of the fundamental value of life that drives the forces that wish to remove Terri Schiavo's feeding tube.

The Terri Schiavo saga in Florida, where a patient in a vegetative state has recently had her feeding tube reinserted by order of the legislature and governor, reminds us of the reality of modern life. An inescapable result of the extraordinary technological progress of the last several decades has been that critically ill patients who would have died early in their illnesses, often in the relative comfort of their homes, are now kept alive much longer in hospitals, often suffering great pain.

In addition to the component of human misery involved in discussions of medical treatment of the irreversibly ill, the skyrocketing cost of healthcare, particularly the large percentage of healthcare consumed in the last six months of life, have led to calls to limit "futile" treatments. Today, when there are almost limitless therapeutic options but limited economic resources, society may not be willing to provide "useless" therapies to patients who will not benefit.

The Torah teaches us that every moment of life is intrinsically valuable; life itself is never futile.

In secular ethics discussions, medical futility encompasses several issues only loosely related to one another. Futility of treatment is often confused with "futility" of life. The Torah teaches us that every moment of life is intrinsically valuable; life itself is never futile. Rabbi Shlomo Zalman Auerbach, a leading halachic authority of the past generation, points out that we have no "yardstick" by which to measure value of life. Even for a deaf, demented elderly man, incapable of doing any mitzvot, we must violate the Shabbat to save his life.1 It is not within our moral jurisdiction to decide what quality of life is "not worth living" and therefore unworthy of treatment.2

The only components that are open to halachic debate are those involving futility of treatment. From a Jewish perspective, we must ask whether the physician may withhold, and whether the patient may refuse, futile therapy.

The intrinsic value of life does not necessarily imply that every patient must be treated in every instance. Nor does this mean that we do not appreciate that death may be preferable to a life of extreme pain.3 As Rabbi Auerbach writes, we may pray for the death of a terminally ill patient4 who is in great pain, but we must never do anything to hasten his death. He also recognizes that inaction is sometimes the best approach when life is "bad and bitter."5 Despite the obligation to treat even the sickest patients, it is well established that patients do have limited autonomy in refusing treatment for terminal conditions, particularly when they are in intractable pain.6

Medical futility is a recognized concept in Jewish law.7 A treatment that will not reverse the condition to which it is being applied, even if successful, is an example of true medical futility. Performing CPR on a terminally ill patient whose heart has stopped -- not because of a cardiac abnormality, but because the patient has reached the point at which his body can no longer support life -- is truly futile and may be withheld.8 Reviving the patient may be possible, but cardiac arrest will almost certainly recur within a very short time.

This can be contrasted with performing CPR on an otherwise healthy individual who develops an irregular heart rhythm that will result in sudden death. If resuscitation is successful, the arrhythmia may be treated and the patient may live a long life. It goes without saying that this second patient must be resuscitated because the therapy is helpful and sometimes even curative.

But, independent of the aspect of futility, in the case of the first patient, halacha would likely dictate that intervention is forbidden because of the principle of "goses" (the moribund patient). A patient on his deathbed, for whom no cure is possible and death will inevitably occur within three days, may not be disturbed at all and must be allowed to die.9 The Mishna compares the life of the goses to a flickering flame that will be extinguished if even slightly disturbed.10

Interestingly, the "goses" may not be touched at all except for comfort measures.11 Practically speaking, this means that when a patient is approaching death, one may not take his temperature, measure his pulse or blood pressure, and certainly may not draw his blood unless curative therapy or comfort measures will be applied based on the test results.12 In circumstances such as these, the physician may grounds in Jewish law to refuse to administer the "futile" therapy.

REFUSING THERAPY FOR THE TERMINALLY ILL

A second form of futile therapy involves a treatment that is extremely unlikely to be successful, but is intended to reverse the condition to which it is being applied. An example would be a patient with a cancer that has not been shown to be responsive to standard chemotherapy. The physician may offer the chemotherapy. But clearly, according to Rabbi Moshe Feinstein, if the patient is in intractable pain and the therapy is not proven to be efficacious, the patient may refuse the physician's offer of a "futile" therapy that prolongs life without a reasonable expectation of cure or relief of pain.13

Rabbi Feinstein further states that in such a situation, the patient should not be treated unless a cure or pain relief is possible.14 Rabbi Shlomo Zalman Auerbach writes that while we cannot force the patient to accept the treatment, the patient should be encouraged to accept the therapy because of the intrinsic value of life lived even in extreme pain.15 Nevertheless, this would be a case where a patient can halachically refuse the futile treatment.

WHAT IS NON-TERMINAL ILLNESS?

It is important to note that Jewish law clearly distinguishes between terminal illness and progressively debilitating illness (a distinction that is often ignored in secular ethics discussions).

Thus, in halacha, persistent vegetative state and Alzheimer's disease are not terminal conditions, per se, despite the fact that they are progressive, irreversible and inevitably result in death. Halacha insists that patients with these illnesses deserve the same full range of treatment that is made available to any other patient. They are not "terminal" (until the very end stages of their illnesses) and must be aggressively treated without regard to the apparent "futility" of their lives.

THE CASE OF TERRI SCHIAVO

Let us take the example of Terri Schiavo. She is not brain dead nor is she terminally ill. She is brain damaged and remains in what appears to be a persistent vegetative state. All of her bodily functions are essentially normal, but she lacks the ability to "meaningfully" interact with the outside world (although her parents claim that she does minimally respond to their presence and to outside stimuli).

To remove the feeding tube from a patient whose only impairment is cognitive is simply murder.

Her impairment is cognitive and Judaism does not recognize any less of a right to treatment for one cognitively impaired than one mentally astute.

It is a denial of the Jewish ideal of the fundamental value of life that drives the forces that wish to remove Terri Schiavo's feeding tube. While Judaism does recognize quality of life in certain circumstances (such as the incurable terminally ill patient in intractable pain mentioned above), the Torah does not sanction euthanasia in any situation. To remove the feeding tube from a patient whose only impairment is cognitive is simply murder.

We must ask ourselves when we view images of cognitively impaired patients such as Terri Schiavo whether the pain that we feel is Terri's or whether it is our own. While we may suffer watching movies of the severely brain damaged, it is our own thoughts of the horror of a life without cognition that drives us to project that pain onto the victim who may not be suffering at all.

The key to analyzing any situation is to realize that good ethics start with good facts. One must provide the posek (halachic decisor) with an accurate, honest, and thorough assessment of the patient's medical condition. Only then can a halachically valid and ethically proper decision be made.

Adapted from an article that appeared in Viewpoint: National Council of Young Israel, Winter 1996 entitled: "HALACHIC ISSUES REGARDING FUTILITY OF MEDICAL TREATMENT: Applications To Nutrition And Hydration In The Terminally Ill Patient

2 Auerbach, Rav Shlomo Zalman, "Treatment of the Dying," Halacha U'Refuah, vol. 2, p. 131: "a person is not master of his body to relinquish even one moment"

3 Aruch Hashulchan, Yoreh Deah, 339:1: "...even though we see that he is suffering greatly in his moribund state (a goses) and death would be preferable, nevertheless it is forbidden to do anything to hasten his death, for the world and everything in it belongs to Hashem, and this is His will."

15 "Treatment of the Dying (Goses)," Halacha U'Refuah, vol. 2, p. 131:: "if the patient is G-d-fearing and mentally intact, try very hard to convince him that better is one moment of tshuvah in this world than eternity in the world to come" 16 Feinstein, Rav Moshe, Igros Moshe, Choshen Mishpat II, Volume 7, siman 75:1, p.315

Is Stem Cell Research Ethical?
Why My Iranian Mother Didn’t Want Me to Become a Religious Fanatic
The Jewish History of Prague
Why the Sexual Revolution was Bad for Women
Comments
MOST POPULAR IN Interpersonal
Our privacy policy
Aish.com Is Looking for Great Writers