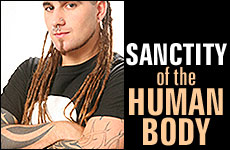 Do we own our bodies, or are they only on loan?

Question: How does Judaism approach the relationship of the individual to his/her body? How much control does one have and what are one's obligations?

Answer: While the culture in the United States has swung toward patient autonomy over the past few decades, Judaism retains a markedly paternalistic view of medicine. The Torah states that the human body was created Bi'tzelem Elokim, in the image of God, and is the property of the Creator. Man is given custodial rights to his body, and has no more right to harm or destroy his body than the superintendent has to ransack the building he is hired to maintain.

This simple concept has applications in all facets of medicine. The Torah forbids tattooing because it permanently mars the body, akin to graffiti on a magnificent building (Leviticus, 19:28). Piercing of earlobes is permitted because it is not a permanent change and will heal if the posts are not continuously kept in place. Aesthetics aside, presumably any other body part may be pierced if the effects are not permanent. We see in the Torah that Rivka wore a nose-ring!

Suicide is strictly prohibited because the custodian may not prematurely destroy the body he is duty-bound to protect (Genesis, 9:5). By extension a physician may not hasten the death of a patient, not only because of his duty to preserve life, but because he has no right to destroy the property of another, in this case God.

One's custodial duties extend even further. A person must protect his body from harm and do everything possible to repair any damage that occurs. Therefore the individual is required to live a healthy life and to seek medical care when needed. Interestingly Maimonides was one of the earliest medical proponents of preventive medicine, clean air and environment, and the value of a healthy diet and exercise.

Jewish law encourages one to proactively guard one's body by undergoing diagnostic tests that have the potential to save lives, such as mammography and colonoscopy. One should also appropriately vaccinate oneself and one's children to avoid preventable disease. Dangerous activities such as cigarette smoking are forbidden by many halachic authorities, and strongly discouraged by the remainder. This is particularly true regarding cigarette smoking which causes sickness and death to third parties who are exposed to the second-hand smoke.

Judaism does not recognize the right to refuse effective therapy that does not carry significant risk. If a treatment for a dangerous condition is not expected to have significant side effects, one must accept the treatment. On the other hand, we are generally forbidden from performing dangerous experimental treatment on humans, unless the expected outcome will be therapeutic and no established alternative effective treatment exists. Also, a terminally ill patient in intractable pain may refuse a palliative treatment that has no reasonable expectation of cure.

One may not donate his body to science or to a medical school for the training of future physicians.

Even after death, the stewardship continues. The Torah requires immediate burial for everyone, including criminals (Deuteronomy, 21:23). Without a valid reason, no invasion of the body is permitted, because it is created in the image of God. The accepted opinion in Jewish law, formulated in the 18th century by Rabbi Yechezkel Landau, forbids autopsy and transplant unless an identifiable human life may be saved. Because one's body is not his property, the halachic consensus is that one may not donate his body to science or to a medical school for the training of future physicians.

One modern scholar who dealt with the prohibition of harming one's body was Rabbi Moshe Feinstein. While dieting for medical reasons is certainly permissible, Rabbi Feinstein examined the question of dieting for vanity alone, which deprives the body of the pleasure of eating and may involve substantial discomfort. He ruled that dieting, even if only to look thin, is permitted because the personal gain from the feeling of looking good is greater than the benefit one derives from eating the extra dessert!

While plastic surgery to correct deformities is certainly permissible, Rabbi Feinstein rules that plastic surgery is sometimes also permitted to improve self-image. He reasons that improved self-image is a tangible benefit that, in certain circumstances, may outweigh the prohibition on harming oneself.

So as we can see, the obligation to respect and guard our bodies extends far beyond just staying away from risky activities to include living a healthy lifestyle. It includes preventative medicine as well as actively treating illness. In fact, the requirement to respect our bodies continues even past death.

"Virtually Brain Dead"
Don’t Believe in Other Gods Versus God is One
Seeing Without Eyes
Why Shouldn’t We Eat Whatever We Want?
Comments
MOST POPULAR IN Interpersonal
Our privacy policy
Aish.com Is Looking for Great Writers