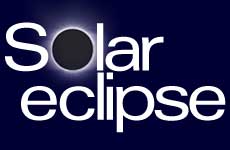 The startling event of a solar eclipse.

Few
natural phenomena evoke as much deliberation as a celestial eclipse.

Basic to
Jewish Kabbalistic thought is the idea that everything in the physical world is
a metaphor for a spiritual concept. What then is the specific message of a
solar eclipse?

The
Talmud (Sukkah 29a) declares: "An eclipse of the sun is a bad omen for the
world." Why? It's like a king who made a huge banquet and set up a lantern
to illuminate the party, but then the lantern was covered. Similarly, this
world is a beautiful banquet which God has prepared for us. If the lantern is
covered, as in a solar eclipse, it diminishes our enjoyment of the world.


So why
would God send us such a gloomy message?

The Talmud specifies that the sun is eclipsed when a great rabbi dies and is not eulogized properly.

The
Talmud specifies that, among other reasons, the sun is eclipsed when a great
rabbi dies and is not eulogized properly. If a society does not grieve properly
for a great teacher, it shows a lack of appreciation for the ethical values
that he upheld. This is a bad omen -- indicating a society in a state of moral
and spiritual decline.

The
Maharsha, a rabbi who lived in 17th century Poland, said that a great teacher
is compared to the sun in that he "radiates" Torah to the people. For
example, the Talmud (Baba Batra 75a) compares "the face of Moses to the
face of the sun." So a solar eclipse could be called an "eclipse of
the spiritual sun."

A
TIME TO PAUSE

An
eclipse is an opportunity to pause and examine our own relationship with Torah
scholars. Do we scorn them? Or do we see them as luminaries of humanity? Did we
make an effort to become close to them? Did we even know their names?

Of
course, eclipses are easily predictable, and even in Talmudic times the
astronomers were already able to accurately predict celestial cycles. So how
can we say that eclipses portend anything about modern society?

God
knows the future, and at creation was able to determine when cycles of moral
and spiritual decline would occur when great teachers would not be properly
appreciated.

Thus He
set the cycle of eclipses to correspond. Of course, the whole concept that God
is outside of time and space is difficult for us mortals to comprehend. But
that's the way it is.

Kabbalah
aside for a moment: From a scientific standpoint, what causes a solar eclipse?

The moon
orbits the earth, and whenever the moon is lined up between the earth and the
sun, the illuminated side of the moon faces away from the earth and cannot be
seen. This moment is called a "new moon" and is the beginning of
every Jewish month (Rosh Chodesh).

The orbits of the moon and earth are tilted and do not usually line-up precisely enough for an eclipse.

So why
isn't there a solar eclipse every month? Because the orbits of the moon and
earth are tilted at an angle, and the line-up is usually not precise enough for
an eclipse.

Interestingly,
the sun is 400 times larger than the moon, so how could it be that the moon can
actually fit as a perfect cover over the sun? The answer is that the sun is
also 400 times farther away than the moon. Hence a perfect fit!

On a
practical note: If you encounter a solar eclipse, even though the sun appears
covered, don't look. The sun's corona is still as powerful as ever. People have
gone blind after looking at an eclipse for as few as four seconds. There is no
pain when the retina is being burned, and the resulting visual symptoms do not
occur until at least several hours after the injury has occurred -- by which
time it is far too late.

Maimonides
writes (Yad Deyos 4) that it is a Torah obligation to guard one's physical
health. Therefore, regardless of how tempting it is to look at the sun during
the eclipse, don't do it. Sunglasses are not effective; you must use
specifically approved treated plastic or glass filters, or indirectly view the
sun's projection through a pin-hole.

May the
Almighty illuminate our hearts, and shine His light of Torah throughout the
world.