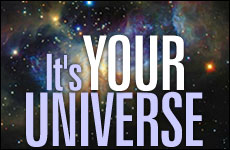 Our planet is truly a miracle.

Yet, the Talmud teaches, "Each person is required to say, ‘The entire Universe was created for me.'"

As strange as that may sound, some scientists have found evidence that this is truer than the average person thinks.

A fascinating book, The Privileged Planet, discusses in detail from a scientific perspective the improbabilities about the existence of life on Earth.

One of the more interesting ideas presented in the book is referred to as the "Goldie Locks Zone," which scientists label a place in the galaxy where a habitable planet can exist. It is not too hot and not too cold – but just right. Earth is precisely positioned in the "Goldie Locks Zone" of the Milky Way galaxy.

Within our solar system the habitable zone is relatively narrow, beginning well outside the orbit of Venus and ending short of the orbit of Mars. If the Earth was just five percent closer to the sun it would be subject to the same fate as Venus, a runaway greenhouse effect with temperatures running to nearly 900 degrees. Conversely, if the Earth were twenty percent further from the sun carbon dioxide clouds would form in its upper atmosphere, initiating a cycle of ice and cold.

Similarly, just as our location in the solar system is optimized for habitability so is our location in the galaxy. The Milky Way is a spiral galaxy, which means it is highly flattened, has the appearance of a spherical ball at the center and spiral arms extending outward from it. We are about halfway between the center of the galaxy and the edge. The most dangerous place in the galaxy for life is in the center, where the density of stars and supernovas (i.e. exploding stars) is very high, producing deadly radiation.

At the same time, in the outer regions of our galaxy the abundance of "heavy elements" -- like iron, magnesium, silicon and oxygen -- are lower. These are necessary to build Earth-size planets needed to sustain life.

The region where complex life is possible within the Milky Way has been called, "The Galactic Habitable Zone." Even within this zone, there are places friendlier to life than others. The Earth happens to be located in one of them, in a relatively safe and uncrowded region of the Milky Way galaxy optimally suited for life to exist.

The Earth itself is uniquely ideal to support life. Its crust varies between four and 30 miles thick, a relatively paper-thin surface, consisting of more than a dozen tectonic plates that are in constant motion. This motion regulates the planet's internal temperature and allows chemicals essential for living organisms to "breathe" outward and remix in a way necessary for life. If the Earth's crust were a little thicker then plate-tectonic recycling could not take place.

The Earth itself is uniquely ideal to support life.

If the Earth were smaller its magnetic field would be weaker, allowing the solar wind to strip away our atmosphere, slowly transforming the Earth into a dead, barren world much like Mars.

The atmosphere is a thin blue ribbon of glowing light measuring less than one percent of the planet's diameter. It is composed of just the right mixture of elements to insure a livable climate, protection from the sun's radiation and the correct combination of gasses necessary for liquid water and complex life.

If our moon did not exist, many scientists believe life on the Earth wouldn't either, because its gravitational pull stabilizes the angle of our planet's axis, necessary to insure relatively temperate seasonal changes.

If our sun was smaller, like 90 percent of the stars in the galaxy, the habitable zone would be smaller. The Earth would have to be positioned closer for life to exist. However, the increase gravity would lock our planet's rotation into synchronization with its orbit, which would in essence keep one side of the planet always facing the sun with the other side always facing away from it. The side continually facing the sun would be bombarded by radiation from solar flares, while the dark side of the planet would lay shrouded in perpetual cold and ice.

Finally, The Privileged Planet cites scientists who make an important point about how to view the truly improbable circumstances that allow life to exist on our planet. There are 100 billion stars in the galaxy. This might lead someone to believe that the odds are pretty high that life like that on our planet developed somewhere else in the galaxy.

However, this vastness has to be weighed against the improbability of life emerging on a planet.

Researchers have developed equations estimating the probability of attaining, simultaneously, even just twenty or so of the essential, basic factors necessary for life. The number is exceeding small, about 10-15, they estimate, which is one chance in a one followed by 15 zeroes, or one one-thousandth of one one-trillionth. When compared even to a number as large as the 100 billion stars that are in the galaxy the number 10-15 is much smaller. In other words, it is extremely unlikely to happen.

Our planet is truly a miracle.

Some cite this as an example of the Anthropic Principle, which in simplest terms means that everything in the Universe seems to be uniquely created for us, just as the sages of the Talmud said long ago.

How improbable it is -- even given the staggering number of solar systems there are in the Universe -- that there is a little speck in the Universe called the planet Earth that can support life... and afford human beings the opportunity not only survive but think about things like the Anthropic Principle.

Altering Genes
It Takes A Lot Of Faith To Be An Atheist
How Instagram Brought Back This Nostalgic Soup
What Makes Eli Run?
Comments
MOST POPULAR IN Interpersonal
Our privacy policy