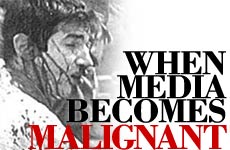 There's another battle taking place in Israel. This one is being led by the media.

It is now well known that the bloodied and dazed "Palestinian" depicted in the Associated Press photograph published in The New York Times and other major papers on the first day of Rosh Hashana was in reality a yeshiva boy from Chicago. And that Tuvia Grossman's assailants were not Israelis but members of a Palestinian mob who dragged the young man out, beat and stabbed him. And that the infuriated Israeli policeman with a baton in the background was shouting not at the bloodied youth but at the Palestinians who brutally attacked him.

The correction the Associated Press (and The Times) ran several days later was anemic, almost rivaling the outrageousness of the original caption. It identified the wounded man as Mr. Grossman, described him as "an American student in Israel" - but made no mention of his religion, no mention of how he suffered his injuries, and no mention of the Israeli policeman's actual role in the incident. Exactly a week after the original photo ran in the Times, the paper, to its credit, did publish a follow-up story explaining the precise context of the shot. Seasoned observers, though, could not be faulted for wondering if the photograph would have been published in the first place had the press known what it really depicted.

For there are a number of more subtle biases to be perceived by readers of newspapers like The Times - and other media as well. Take the Temple Mount, which unbiased historians have always described precisely as what its name represents -the site of the two Holy Jewish Temples, the second of which was destroyed by the Roman army nearly two thousand years ago. Of late, in apparent deference to Palestinian leaders who claim that no Jewish Temple ever stood on the Jerusalem hill toward which Jews have prayed for millennia, The Times has appended the phrase "which the Arabs call the Haram al Sharif."

More recently, the same influential paper referred to "the Temple Mount, which Israel claims to have been the site of the First and Second Temple." No longer established historical tradition but a mere "claim."

A day later, the paper described Israeli troops as having "stormed the Haram, holiest Muslim site in Jerusalem, where hundreds of people were at worship." No mention whatsoever in that article of any "Temple Mount."

When baseless biases are openly voiced, they are seen for what they are: ugly, evil, human faults. When subtly layered, though, into journalistic products - choices of photographs, captions, turns of phrase, stories' spins - they often slip by unnoticed, and proceed to infect and deform countless hearts and minds.

All who understand the seemingly self-evident fact that the ongoing rioting is the fault of... the rioters should have no problem seeing the sad bias in much of the recent reportage on events in Israel. But the Middle East conflict is hardly the only context in which media bias should be obvious to objective observers.

I have often been a public critic of the press - both general and Jewish - for misportraying the Orthodox Jewish community. Whether it has been the repeated focus on individual rowdies responding to pointedly non-traditional services at the Kotel or shameless exaggerations of such confrontations (excrement was never - repeat, never - thrown at worshippers); whether it was calling Israel's carefully crafted balance between synagogue and state a "theocracy", or the characterization of the Rabbinate's jurisdiction over matters of personal status - designed, in David Ben-Gurion's words, "to avoid, God forbid, the splitting of the Jewish people" - as an "Orthodox monopoly"; whether it was misrepresenting the words of Torah-scholars or spreading baseless stories about Orthodox Jews' practices - the media's demonization of Orthodox Jews is an all too common feature of what passes today for objective journalism.

Just this week the L.A. Times portrayed Orthodox Jews as hate-filled in an editorial cartoon.

Perhaps the silver lining in The Times' cloudy reportage on the Middle East is that now it should be clear to all caring Jews, of whatever religious or cultural persuasion, that the media can, simply put, be dreadfully irresponsible - and that when it is, it is not a vital "fourth estate" but a clear and present danger to Jews.

What a timely and proper resolution we might all consider at the start of this new Jewish year to unabashedly doubt the media when it paints Jews - Orthodox or any of us - with a tar-loaded brush.

Courtesy of Am Echad