Challenging the UN's Darker Side 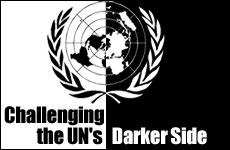 With Durban II now in the works, the UN secretary general can choose to speak truth to power now.

UNITED NATIONS Secretary General Ban Ki-moon, now eight months in office, is proving that his courteous manner should not be mistaken for lack of resolve. The Korean diplomat's administration has spoken out for the victims of Darfur, confronted Sri Lanka over the killings of aid workers, and acted to establish the international tribunal on the assassination of former prime minister Rafik Hariri of Lebanon. Quietly but firmly, Ban is helping to confirm the UN's indispensable role in the world.

Yet Ban has made little progress in restraining the UN's own dark side. Getting underway in Europe alone, in the space of a few days this week, will be two UN-backed initiatives that run counter to the secretary general's efforts to improve the world body's effectiveness and credibility.

First, the UN on Monday will launch a series of international meetings on racism, leading up to a major world conference in 2009. The so-called "Durban Review" process is the follow-up to the 2001 conference in South Africa that turned into a diplomatic fiasco. All indications suggest next week's session, and the events that follow from it, will mimic both the format and script of the original.

The lead-up to Durban in 2001 was hijacked by the 57-strong Organization of the Islamic Conference. A February 2001 preparatory meeting for Asian nations was held in Tehran. (Israelis were a priori excluded.) The preparatory committee adopted a text singling out Israel for "ethnic cleansing" and of a "new kind of apartheid, a crime against humanity."

Durban's final declaration, after international interventions, toned down the language, but went on to single out Israel. The US delegation walked out.

Far worse, though, were the parallel proceedings held by the nongovernmental organizations. One widely distributed flyer showed a photograph of Hitler and the question, "What if I had won?" The answer: "There would be NO Israel." Goebbels-like caricatures of Jews circulated freely.

"Having experienced the horrors of the Holocaust firsthand, this was the most sickening and unabashed display of hate for Jews I had seen since the Nazi period."

In his eyewitness account published in the Fletcher Forum of World Affairs, Democratic Representative Tom Lantos of California, a US delegate, remarked that "having experienced the horrors of the Holocaust firsthand, this was the most sickening and unabashed display of hate for Jews I had seen since the Nazi period." The final nongovernmental organization statement declared Israel a "racist apartheid state" guilty of "genocide."

The ghosts of 2001 are almost certain to be conjured up by the shamans of Durban II. In addition, Islamic states are expected to introduce new accusations against the West for "religious defamation." The subtext of this refrain -- which has made its way into UN resolutions over the past six years -- is that the greatest victim of Sept. 11 was actually Islam.

The party chosen to chair the entire process through 2009 indicates its seriousness of purpose: Moammar Khadafy's Libya. The same regime that, in 2002, gave its highest award to convicted French Holocaust denier Roger Garaudy, that routinely brutalizes black African migrants, and that tortures Bulgarian and Palestinian medics for the crime of being foreigners. This is the country that will now teach the world about racism -- all under the UN's imprimatur.

Second, on Thursday, while the Geneva session is underway, the European Parliament in Brussels will host a UN "International Conference of Civil Society in Support of Israeli-Palestinian Peace." Contrary to the noble-sounding title, the rapprochement is disingenuous at best.

Consider its idea of balance: On one side will be selected Palestinian presenters like Raji Sourani, who justifies Hamas attacks as "resistance," and Jamal Juma, who says Israel is a "colonial racist apartheid state." On the other side are selected Israeli presenters who couldn't agree more. These include Michel Warschawski, self-described as a "well-known anti-Zionist activist," and Nurit Peled-Elhanan, who recently pronounced that "the Jewish head has unceasingly been bowed in worship of racism, while the Jewish mind is devising the most creative ways to devastate and demolish and destroy this country." By citizenship, they are Israeli, but only a scoundrel or a fool would imagine either as representatives of Israel's point of view.

The UN's 16-member Palestinian division is part of a sprawling infrastructure of anti-Israel committees and programs launched by the General Assembly in 1975 alongside its resolution declaring that "Zionism is racism." In the past six months alone, the division devoted vast sums for gatherings in Doha, Rome, Pretoria, and New York. Wouldn't its $5 million budget go to better use -- and actually help Palestinians -- by building clinics in Gaza or schools in Ramallah? Tragically, the Arab regimes responsible for its annual renewal seem more interested in preserving grievances than solving them.

Faced with such intransigence, is there anything the secretary general can do? There is.

The greatest enabler of the Durban debacle, as Lantos recounts, was Mary Robinson, the UN's human rights commissioner, whose diplomacy of appeasement encouraged the spoilers. This time around, the secretary general should instruct his Geneva officials to stand firm.

As to Brussels, the secretary general's representative, billed as opening the event, should send a clear message that anti-Israel propaganda and posturing are relics of the past -- and hurt the cause of peace rather than help the Palestinians.

A UN secretary general cannot be judged by country-driven bodies that go astray. But as Ban did recently in protesting the hypocrisies of the Human Rights Council, he can choose to speak truth to power now.