Complicit: Stoking an Environment of Hate 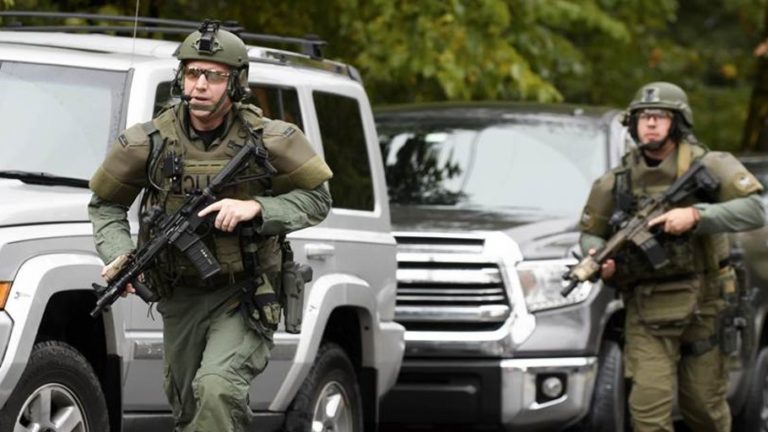 We have much work to do in this post-massacre world. Let’s get started.

On Shabbat morning, October 27, 2018, as Jews around the world gathered in synagogues, about a hundred Jews were praying in the Tree of Life Synagogue in Pittsburg. Among the congregants was an eight-day old baby boy whose family and friends were celebrating his bris.

By now we all know what happened next: a rabid anti-Semite burst into the building brandishing an assault rifle and at least three handguns, shouting anti-Semitic insults. Within 20 minutes he murdered 11 congregants and wounded six others, including four police officers who responded to the scene.

In the aftermath of the bloodbath, some prominent figures posted there were “no words” to describe this loss. “No words are adequate,” one Jewish communal leader commented. I disagree. While our dead lie before us, there are some words we can and must say. On this day of eleven funerals, as many others lie in hospitals recovering from gunshot wounds, let’s start shouting them out loud.

Richard Bowers, the racist gunman who carried out this despicable massacre, was an outspoken anti-Semite. The New York Times reported that he “had been spewing his anger in post after post on the web, calling immigrants ‘invaders,’ distributing racist memes and asserting that Jews were the ‘enemy of white people’”.

We can’t ignore hate speech and threats of violence.

Yet in all those months of racist rants he was apparently not taken seriously. He still possessed his guns. The internet forums he polluted with his vile rants let him continue to spew hate. The online forum where he posted most frequently shut down his account after the massacre, but they seemingly never thought to limit his calls for hate and violence before then.

I can imagine what what might have gone through the minds of readers who viewed Bowers’ hateful posts. Perhaps some people dismissed Bowers as a crank. Maybe some made excuses for his posts, rationalizing them away or insisting he was just blowing off steam and wouldn’t actually do anything violent.

I can imagine these reactions because, like many other Americans, I’ve heard them in recent months. “Lighten up.” “Get a sense of humor.” “I’m sure he doesn’t mean it.” Well, Richard Bowers did mean it. Maybe if someone had spoken up sooner, had objected to his anti-Semitic fulminations, he could have been stopped. Everyone who read his rants and did nothing is complicit. We all have to stop tolerating hate speech. Doing so might prevent a future attack.

Much of Bowers’ hate was posted in Gab, an alternative social media site that gained in popularity as more mainstream social media platforms like Facebook and Twitter clamped down on extremism and hate speech. “It was on Gab where he found a like-minded community, reposting messages from Nazi supporters,” the New York Times reported.

While most of us don’t migrate to the dark corners of the internet, too many people are finding a virtual home there. It’s time to stop tolerating extremist content, to say no to extremist discourse. To say that it’s not acceptable to re-tweet or to share posts that originated with known radicals. It’s time to send the message that some ideas are so vile they cannot be tolerated.

Before he burst into the Tree of Life Synagogue, Bowers posted one final sick message: “I can’t sit by and watch my people get slaughtered...I’m going in.” How many times was that post viewed? How many people read it, sitting in the safety of their homes, sipping their morning coffee, and did nothing? How many people shrugged and ignored its dire warning?

Saying that we want to harm others is becoming frighteningly common. “I can’t wait for vigilante squads to start gunning down journalists,” one US comedian “teased” recently. A week before the massacre in Pittsburgh, I was shocked to see t-shirts “jokingly” quoting Shakespeare: “First we kill all the lawyers.”

Casual threats of sadistic violence aren’t limited to the U.S.: a few days earlier in England, a sitting MP told reporters about Prime Minister Theresa May: “The moment is coming when the knife gets heated, stuck in her front and twisted. She’ll be dead soon.”

This is dangerous territory. My grandmother who escaped Nazi Europe always drummed it into me: when people threaten violence explicitly, one would be a fool to ignore their warnings. We’re in a moment today when it’s becoming somehow acceptable to threaten to kill and to have our words dismissed as less than serious, as hyperbole or a joke. Perhaps not everybody who threatens violence will carry it out, but some will. It’s time to stop adopt a zero tolerance of these types of violent threats.

When catastrophe strikes, we respond by doing good deeds, by studying Jewish texts, by finding ways of bringing more good into the world in memory of those who have been killed. As we mourn our dead today, let’s resolve to change and grow in their merit. Sign up for a Jewish class for them. Go to synagogue for them. Read a Jewish book in memory of the eleven people who were gunned down in cold blood. Let our charity, our prayers, our mitzvot, our acts of kindness bring light into the world in memory of the eleven precious lights that were just snuffed out. Don’t continue with life as usual. Make sure the massacre has changed you.

No matter what we do, let’s not offer bland platitudes or say, “There are no words”. There is much we have to say today. We have much work to do in this post-massacre world. Let’s get started.