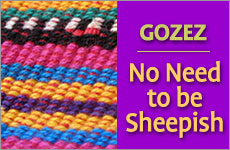 That's okay – with Gozez,1 our 12th melacha, we're about to learn about how to get from wool to fabric. This labor category opens the second major grouping of melachot, known as the "Order of Garments."2 These melachot detail the process of making fabric, from the shearing of the wool until the finished fabric.

As we've mentioned earlier, each prohibited melacha (labor category) is based on an activity that took place in the Mishkan (the Tabernacle). The curtains in the Tabernacle were made of fabric, woven from animal wool.3

Within the 'Order of Garments', there are three groups of labor categories.

That's the big picture. Now on to Gozez. 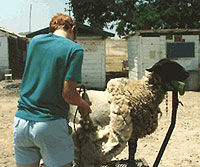 In order to produce these fabrics, the first step was to shear the wool from the animal. So, the classic act of Gozez would be shearing your sheep's wool on Shabbat.4 Extending this idea, the Sages taught that any removal of something that grows upon a living being is also considered an act of Gozez.

How does this principle apply in daily life?

For humans, the three things that grow on our bodies are hair, skin and nails.6 Therefore, if we cut any of these on Shabbat, we are engaging in a Torah-prohibited act of Gozez.

What if you remove the hair (or skin or nails) not 'in the normal manner' – e.g. by biting it off, rather than cutting with an instrument like a scissors or nail clipper? Though this shinui reduces the act from the realm of a Torah prohibition, removing hair, skin or nails in a non-normal manner is still not allowed, based on rabbinic decree.7

Let's look more closely at each of these issues.

It's Shabbat morning and you're headed for shul. You are ready to leave when you realize you would like to brush your hair. As you reach for the brush, you pause for a moment.

It might seem that brushing hair is not a problem of Gozez. After all, we brush hair so it will look good, not in order to "remove it." However, almost all of the time, some hair will come out during brushing.8 As a result, this activity falls within the category of Gozez.

There is a halachically acceptable way to avoid this dilemma. Brushing hair may be done on Shabbat if you satisfy all of the following:

The first three conditions are aimed at avoiding the activity of Gozez; the fourth condition is imposed to create extra awareness that Shabbat brushing is different than weekday brushing.

Combing hair on Shabbat is always prohibited, since it is virtually impossible to avoid removing hair when combing.

Beard – Let's consider another, similar issue: stroking one's beard. In this case, one would need to be careful to do so only gently, so that hairs do not fall out in the process.

Plucking eyebrows, or removing a gray hair – These activities are prohibited on Shabbat, whether by hand or with an instrument. 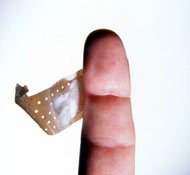 Removing a Band-Aid – Can you remove a band-aid from a part of your body that is covered by hair? The simple answer would be no, because hair will certainly be pulled out. The solution is to apply some vegetable oil or olive oil, in order to dissolve the adhesive and get the band-aid to slide off without any pulling.10 However, if there is discomfort and no other way, one may remove it.11

Gum – What if chewing gum got stuck in your hair? Of course you could not forcibly remove the gum, since hair will inevitably be pulled out. Here's a simple solution (that helps on weekdays, too): Apply ice to the gum, which will cause it to harden and lose most of its stickiness. After a few minutes, the gum will slide off without pulling hair.

Wigs – May a woman brush a wig on Shabbat? In this case the halacha permits it – certainly if the wig is made from synthetic materials (since this does not fit the basic Gozez definition of "something that grows upon a living being"), or even if it is made from human hair. Why? Because these hairs have already been removed from their original "source of growth." Yet, because of other halachic problems, one should still use a soft brush.12

Fur Coat – Regarding Gozez, furs are not similar to wigs, since furs are still attached to the source of original growth. The Sages note that Gozez applies even if the being is not actually alive when the removal takes place.13 Therefore plucking hair from a fur coat would be a biblically-proscribed act of Gozez.14

Bird feathers – The basic halacha is that one may not pluck feathers from a bird, whether dead or alive. But what about removing a feather stub that you find still attached to cooked chicken?

Rabbi Moshe Feinstein writes that it is permissible to remove these feathers, since once they have been cooked with the chicken, they no longer have a fitting use. (As for the issue of Borer, the feathers are considered a 'barrier' to getting to the food.)15

The Skinny on Skin

Like hair and nails, skin is a part of the body that grows (or more precisely, regenerates). So the principle behind Gozez applies here, and cutting, biting off, or removing pieces of dead skin is prohibited.16

One should, therefore, not remove any skin, cuticles or scabs from one's body. Nor should one bite off the loose skin from chapped lips.17

Dandruff – It is prohibited to scratch one's head if it will cause attached dandruff to fall. However, it is permitted to remove completely loose dandruff.18

Splinter – Can one remove a splinter that is under the surface of the skin? If the splinter is causing pain, then one may cut into the outer surface of the skin (being careful not to cause unnecessary bleeding)19 to the point where one can reach it with tweezers. One should be careful to only cut the skin and not detach it.

In general, it's good to get into the routine of cutting your nails (and trimming cuticles) before Shabbat. It is, in fact, a mitzvah to cut your fingernails on Friday in honor of Shabbat.20

Biting nails – In general, nail-biting is discouraged, especially since it may lead to biting fingernails on Shabbat, which is not allowed.21

Nevertheless, the halacha does not consider 'biting' to be the normal manner of cutting nails (even if it might be your normal manner). As a result, biting nails is not prohibited on Shabbat by Torah law – but it is still prohibited by rabbinic law.22

Sitting at home on a Shabbat afternoon, you realize that part of your nail has become detached. It is uncomfortable and even painful. During the week, you would simply clip it or gently pull it off. What about today?

This scenario appears straightforward. Why would you be allowed to remove the piece of nail, if nail-clipping is considered Gozez?

Here, two factors make it possible to get rid of the offending nail:

So if you are bothered by the piece of nail, and it is majority detached, you are permitted to gently remove it in a 'non-normal manner' – that is, by using your hands, rather than an instrument.25

This lenient ruling does not apply to loose or dead skin.26

29. Koshair: Knot What You Think

22. Bishul - Part 4: The Heat of the Matter
The Blue Beyond
Great Place to Live
Is Eating Supposed To Be Spiritual?
Comments
MOST POPULAR IN Jewish Law
Our privacy policy