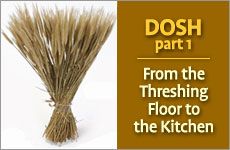 Separating a growing item from its natural shell or peel.

With our next labor category, Dosh,1 we enter a set of melachot that have many practical applications. Dosh itself covers several diverse activities, most of which have to do with food preparation.

As we've seen, the Sages derived each of the melachot from activities that were done to build and maintain the Mishkan.2 The first 11 melachot reflect the actions needed to prepare bread. So when we last left our wheat (back in the previous lesson), it had been bundled together after harvesting. It is now ready to be processed. The first step in the processing is to thresh the wheat, in order to separate the edible part from the chaff (the inedible part).

The activity involved in threshing wheat is separating a growing item from its natural shell or peel (i.e. husk). This activity defines the melacha of Dosh (which means 'threshing').

Since threshing was normally done by having people stamp on the wheat (with their feet), a person violates the Av Melacha of Dosh only if he or she uses foot power. Today, we mainly use our hands in doing the kind of work covered by Dosh. When we use our hands, we are considered to be violating a toladah of Dosh, known as mefarek3 – literally, unloading or taking apart.4

Like some other melachot, Dosh applies only to items that grow from the ground. The Sages determined that this includes not only things like vegetables and fruits, but also to people and animals, since they depend on growing things to survive.5 This is why activities such as milking a cow and nursing a baby are covered by the melacha of Dosh. (We will explain each of these below.)

We can divide the category of Dosh into a few sections, according to the type of activity being done.6 We will look at:

A common application of Dosh is removing a peel. Examples include husking corn (that is, removing the stringy, inedible layer that covers the kernels) and removing peas from an inedible pod.7 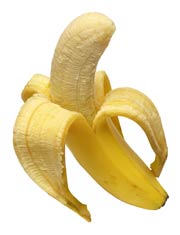 However, not all peels are a problem. We are allowed to remove the peel from most fruits (such as oranges and bananas) right before we eat the fruit. There are two opinions as to why this is so. Some say it is because Dosh does not apply to thin peels that are closely attached to the fruit, since these peels are essentially part of the fruit itself. Others say that Dosh does not apply to peels that remain on the fruit until you're ready to eat it.8 In the case of most fruits, either of these opinions would allow us to peel them on Shabbat.

Dosh applies to anything that grows from the ground, including non-food plants like cotton and flax. These plants are used to make fabrics (the flax plant is the source of linen). Both contain seeds which need to be removed before the fibers can be made. Removing these seeds is a violation of Dosh, since it involves separating the seeds from their natural covering.9

To use liquids, we often need to take them out from their natural containers. In this section, we will examine a number of such examples.

As we've said, a person is seen as 'growing from the ground' because she depends on natural items for survival. So nursing a baby falls into the category of Dosh. Of course, nursing itself is perfectly fine on Shabbat; it is vital to a baby's health and therefore is allowed. But expressing milk for storage is not permitted. Since the baby is not benefiting from it at that moment, separating the milk from its source would be a form of Dosh. However, the buildup of milk causes discomfort to mothers. The solution is for moms to express the milk in such a way that it cannot be used afterwards – for example, into the sink or into a soapy container.10

Just as the halacha is concerned about the comfort of people, it is also concerned with the comfort of animals. It is known that animals are also distressed when they have milk that they can't discharge. 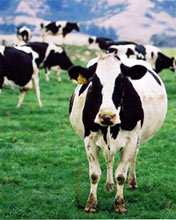 Although most people today are not dairy farmers, it is worth understanding how the Sages approached this issue.

First of all, milking can be done by a non-Jew, since s/he is not commanded to observe Shabbat.

If that is not possible, a Jewish person may do the milking, so long as the milk does not get collected (in other words, it just falls onto the floor).

Maybe the best solution is the use of an electronic milking machine. This device is connected to the cow before the timer activates the pump, and goes on and off automatically. Using this method, it is permitted to keep the milk that is obtained.11

(iii) Squeezing Juice from a Fruit

Known as 'Sechitah,'12 this is probably the most well-known application of Dosh. In our next lesson, we'll learn about these issues, by visiting Melissa in her kitchen.

But first, a review. We've defined Dosh as:

Some examples we've studied are:

29. Koshair: Knot What You Think

21. Bishul - Part 3: Standing the Heat…
What Makes Eli Run?
The Tyranny of Materialism
Science Enters the Mysterious Inner World of Consciousness
Comments
MOST POPULAR IN Jewish Law
Our privacy policy

What Makes Eli Run?
The Tyranny of Materialism
Science Enters the Mysterious Inner World of Consciousness
BBQ Bourbon Cheese Kugel Recipe
Korach 5782: Visit to Lift the Spirit
That Time The Ivy League Found A Way To Limit Jewish Enrollment
Would You Rather Be Right or Happy?
Korach’s Unique Punishment
Who Was Josephus? The Controversial Backstory of the Famed Historian
Should I Break Up, Get Engaged or Keep Dating?
1 2 3 … 2,906 Next »