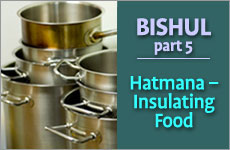 The difference between materials that increase the heat, or retain heat.

We just learned about the restrictions of she'hiyah (leaving food on a flame over Shabbat) and chazara (returning food to a heat source during Shabbat). To these we now add a third activity:

In earlier times, a common way to maintain a food's heat was to insulate it. Similar to the way we insulate our attics, people used to wrap their pots with cotton, sand, or other natural materials. This is not commonly done in modern kitchens. However, as with many other areas of halacha, the principle has contemporary applications.

First of all, why did the Sages prohibit hatmana?

As with other restrictions we've seen, it is a protective measure. People are creatures of habit, and Shabbat comes only once a week. So, unless we are paying close attention, there is a tendency to act on Shabbat just like we do during the other six days.

The Sages reasoned that if someone sees that her food is not warm enough on Shabbat, she might then do something to rectify it.2 Most such actions would be a violation of the melacha of Bishul.3 To avoid the problem, they ruled that food cannot be insulated over Shabbat.

In practice, hatmana applies only when: 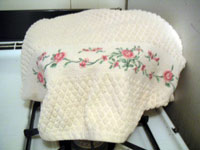 To illustrate – say you have a metal pot, and you've cooked chicken soup in it. You serve some of the soup early Friday evening to your young children, and leave the pot off the blech. If you wrap the pot with a large towel to maintain the heat, and the towel is big enough to completely cover the pot, this would be a prohibited act of hatmana.

The reasoning behind these conditions has to do with the Sages' understanding of the physics of heat. As we learned earlier,7 a food retains its warmth most effectively in the vessel it was cooked in. Once it's transferred to another vessel, heat is lost in the process. Since insulating a food outside of a first vessel (kli rishon) would therefore not be very effective, the Sages did not extend the restriction that far.8

Similarly, when a pot is not fully covered by insulation, or when the insulation doesn't directly touch the pot, a significant amount of heat escapes. Under such circumstances, the amount of heat being maintained was not sufficient, nor is it the usual manner of insulation, to be classified as hatmana.9

Before getting to specific examples, we need to know that all insulation is not created equal. The Sages distinguished between materials that actually increase the heat, and those which only retain heat.10

To be considered a material that 'increases' heat, the insulation itself does not have to be the actual source of the heat. (An example of insulation that is a source of heat is an electric blanket). If you have a heat source connected to your food or pot, and you insulate this food or pot, the combination of these factors classify the insulation as an 'increasing' type.11

Imagine a hot water urn that is plugged into an outlet. So long as it is plugged in, heat will be generated by the heating element inside the urn. If you then wrap the urn in a heat-proof 'jacket' – which often comes with the urn when you purchase it – you have created a situation where the insulation acts to 'increase' the available heat.12

There is a halachic difference between the two kinds of insulation.

If you're insulating with something that 'increases' heat, then you can't even insulate the food before Shabbat to leave it that way during Shabbat.13

However, if you're using one of the 'retaining' materials, then it is permitted to insulate prior to Shabbat.14 As an example, say you baked challah right before Shabbat and you'd like to keep it as warm as possible for the meal. If the challah is not going to be put on the blech (so that it's not connected to a heat source), then before Shabbat you may wrap it tightly in a towel or aluminum foil.

Let's now look at some other applications of these halachot.

• Baked potato – these are commonly wrapped in aluminum foil. Given what we've learned, on Shabbat we cannot completely wrap a hot potato, because this would be hatmana. We can wrap it in a way that some part is exposed. If we do this, we are letting air in, which will act to cool the potato, and prevent the insulating from being fully effective.15 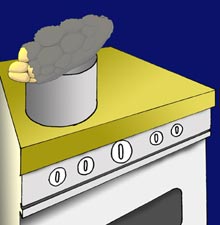 • Atop a pot – Let's say you want to heat some kugel or challah by placing it atop another pot that is sitting on the blech. (This method of reheating was discussed in Lesson #21.) According to what we've learned here, it would be forbidden to wrap the food completely in aluminum foil. Since the blech is a "heat-increaser," we may not place food in this way – even before Shabbat begins. Again, it's permitted to wrap it in a way that some part of the food is exposed.16

• Covering a pot with a lid – this seems like hatmana, but actually it isn't. Placing a lid on a pot is permitted because the primary purpose is to protect the food, even if one's intention is also to keep the food warm.17 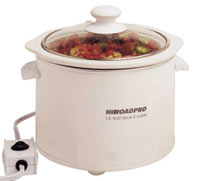 • Slow cookers – as we've mentioned, the slow cooker is an important part of many people's Shabbat kitchens. But there is a stream of thought in halacha that considers the use of these vessels to be a form of hatmana. The thinking is: the slow cooker's insert (which contains the food) is surrounded by an outer component which has a heating element. Thus it's as if the food is being insulated. Although the top of the insert sticks out slightly from the heating element – which means the food is not completely wrapped and thus is not a problem of hatmana18 – according to many opinions this is not sufficiently noticeable. To avoid the problem, you may

An important word of caution: any time you want to insulate a food, whether it's on a heat source or not, please be careful. What may be halachically permitted vis-à-vis Shabbat, is not always safe and wise.

In our next lesson, we'll discuss a few more issues, to conclude the topic of Bishul.

28. The Melachot of Weaving5 min read