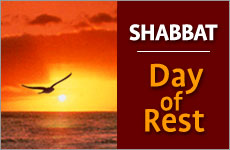 An introduction to the idea of "creative labor activities."

Many people know that Shabbat (Saturday) is the Jewish day of rest. But what does being a 'day of rest' actually mean?

Most basically, it means that we take a break from our regular routine. We have more time to spend on the important things: to see family and friends, to eat well, to study Torah, to rejuvenate. Shabbat gives balance and perspective to our lives and to our week. The word 'Remember' in the first recital of the Ten Commandments refers to these enjoyments.

Beyond relaxing, being restful also means avoiding work. The Torah defines "work" as any creative labor. If my action results in something new, it is considered 'creative.' This is different than the common definition we learn in physics class, which is that work results when a force is applied to an object. The distinction is important: it explains why we are permitted to move a heavy chair from one room to another, but we are not allowed to flick on a light switch.

The Torah, in its second recital of the Ten Commandments, refers to this aspect of Shabbat through the word 'Observe.' But it does not tell us what kind of labor to avoid. The specifics – and there are plenty of them – are spelled out in the Mishnah, the Talmud, and later texts.

Shabbat empowers us – not to discard our workaday world – but to retain our ability to be independent from it.

Our first take-home point, then, is that

Refraining from creative labor is an essential element of observing Shabbat.

Shabbat and the Tabernacle

God created the world in six days and rested on Shabbat, the seventh day.2 Jews are similarly commanded to cease acts of creation (Melachot) on Shabbat, just as God stopped His work.3 This ceasing of "work" acknowledges that God's creation can exist without active human input.

How did our sages derive the many laws of Shabbat? The Oral Law, explained by God to Moses, shows how the verses of Shabbat are juxtaposed to the commandment to build the Mishkan (the Tabernacle).4 From this it is understood that the building of the Mishkan could not take place on Shabbat. In other words, the activities that were required for the construction and operation of the Mishkan are considered 'work' for Shabbat purposes.

The Tabernacle represents a microcosm of the universe – a distillation of all the energies, patterns and resources found in the material world. Therefore as the microcosm of creation, the activities performed in constructing the Tabernacle precisely parallel those acts performed by God (so to speak) in creating the world. Thus these are the same activities that we refrain from on Shabbat.5

The Mishnah6 lists 39 'labor categories' that were performed in connection with the Mishkan. These categories are thus the basis for the laws of avoiding work on Shabbat.

Let's examine the first labor category, Zoreya7 (Planting), in order to see how this works. The classic case of Zoreya is planting seeds in the ground. This activity is included as one of the paradigms of 'work' because bread was used in the Mishkan, and of course it is necessary to grow grain in order to have bread. So, if you plant a seed on Shabbat you have engaged in Zoreya (which is not permitted).

How about if you don't actually plant the seed, but you do something else that will help the seed (or a plant) grow? Say you water the seed, or prune the plant, or similar activities. This isn't exactly Zoreya, but it is similar. These activities are also forbidden, because they resemble the classic case.

In halachic terminology, the classic case in each category is known as the Av Melacha (literally, the 'parent – i.e. primary – labor'). The similar activities are known as toladot (literally, the 'offspring' – i.e. secondary; singular is 'toladah'). While there are only 39 Avot Melachot, there can be many more toladot.

Within halacha there are two broad sources of law: the laws of the Torah, and the laws enacted by the sages throughout the generations. Anything based on the text of the Torah, or passed orally from the time of Moses, is considered to be 'Torah law' (in Hebrew, mi'de'oraita8). Anything else is considered 'rabbinic law' (in Hebrew, mi'derabbanan9).

Regarding Shabbat, all of the Avot Melachot (plural for the 'parent labors') as well as their Toladot are considered 'Torah law.' This is because all of these prohibitions derive from the mitzvah to 'observe/remember the Shabbat'.

Both sets of laws are binding on us as Jews. However, Torah law does have an extra level of stringency, and we will often distinguish between Torah law and rabbinic law when it comes to permitting certain activities on Shabbat.

We will also see throughout this course that there are further Shabbat restrictions that the Sages put in place. These are known as gezerot and takanot (loosely, 'decrees' and 'enactments'). In their great wisdom, the Sages enacted these when they felt it necessary to distance us from potential violations of Shabbat,10 or to strengthen the spirit of Shabbat.

Shabbat is an encompassing experience, one in which we are completely immersed for 24 hours. When approaching the laws of Shabbat, many people are surprised by how they regulate every aspect of our behavior – even our speech. In practice, this takes some getting used to. But with a proper appreciation of where each of these laws derive from – and why – the observance of Shabbat can become the undisputed high point of one's week.

In this lesson, we have

Quite a lot of ideas! But these concepts are the building blocks for everything else we will do in this course.

With this background, we are ready to move ahead to the concept of 'thoughtful labor'. In order to be considered 'work' for Shabbat purposes, an action needs to be done with intention. We will learn the several aspects of this idea in our next lesson.

Here are links to articles on Aish.com that discuss some of the basic ideas and 'philosophy' behind Shabbat:

This lesson provides a general overview of the topic covered. It is intended to provide halachic principles and some examples. There are many nuances to halacha, and in actual practice one should consult with a local rabbi.

There are a number of other helpful studies of the labor categories, including:

For those readers who wish to reference more primary sources, we provide footnotes to this important work throughout our lessons. The citations refer to a specific volume and a specific section within the volume.

Laws of Shabbat
previous
Article #1 of 34
next
Like What You Read?  Give Jews around the world the chance to experience engaging Jewish wisdom with more articles and videos on Aish. It would make your mother so proud and as a nonprofit organization it's your support that keeps us going. Thanks a ton!

21. Bishul - Part 3: Standing the Heat…
For Every Individual, A Torah Scroll
Allegiance To The Monarch
Meet the Real You: Yom Kippur
Comments
MOST POPULAR IN Jewish Law
Our privacy policy
Aish.com Is Looking for Great Writers