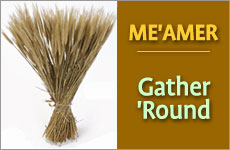 The prohibition of gathering together things that grow.

Till now, we've discussed three relatively familiar kinds of agricultural labor: plowing, planting, and reaping. Our next labor category is less well-known. The melacha of Me'amer,1 which means 'gathering' or 'bundling,' was performed after wheat was harvested. After the sheaves of wheat were removed from the soil, they were bundled together. In this way, they could be moved more easily.

How does this melacha apply today? 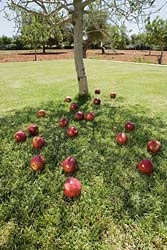 To start with a straightforward scenario: Our buddy Joshua has an apple tree in his backyard and apples have fallen off onto the ground.2 Many of them are in good condition, so he gathers them up in a basket and brings them inside to eat. This is considered Me'amer.

We see from this example that:

Limitations on this Melacha

An action is not considered Me'amer unless four conditions are met. Me'amer only applies to items that:

Condition #1 is familiar to us from previous lessons. The common situations of Me'amer involve items like fruits, vegetables, and grains. Interestingly, some authorities hold that naturally occurring rocks and minerals are also considered as "growing from the ground" for purposes of Me'amer. This would include items like diamonds and other precious gems.6

Our example of Joshua's apples shows how condition #2 works. He gathered up the fruits from under the tree, which is where they grow. In contrast, if you had a bag of apples you'd bought at the supermarket (before Shabbat), and the apples spilled out onto the floor, you could gather them up again. This is because the fruits are no longer in the place where they'd grown.7 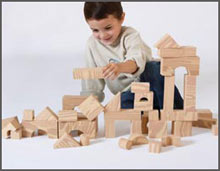 By "original state" (condition #3) we mean that the item hasn't been physically changed from the form in which it grows. Let's take the example of wood. Wood comes from the ground, and is thus subject to Me'amer. However, once it is changed into a specific item, it is no longer in its original state, and Me'amer doesn't apply. For instance, if your child owns a set of wooden toys, you may help him or her clean them up on Shabbat.8

Finally, we have condition #4, reflecting the idea that, once an item is gathered, the halacha does not consider any further gathering to be significant. Now, this is true only if the two acts of gathering are essentially the same. When would you have two gatherings that are not the same? A frequently cited example is stringed figs. When we buy figs today, often they are strung together in a circular shape. This stringing was done after the figs were initially gathered from the trees they grew on. The stringing is considered a second 'bundling' that is different from the original one. Therefore, we are not allowed to string figs (or other fruits) on Shabbat.9

Despite these limitations, the issue of Me'amer may still come up today. In addition to the cases we've mentioned, here are a few other scenarios that involve this melacha:

Making a bouquet of flowers – since flowers grow in the ground, 'bundling' them together in a bouquet would be Me'amer (on a rabbinic level).10

Re-collecting produce – Our initial case of Me'amer was gathering apples that had fallen from a tree. We then said that, once something had already been gathered, it could be re-gathered on Shabbat.

So, if Joshua had prepared a basket of apples in his yard prior to Shabbat, and the apples then rolled out of the basket, he should be able to gather them up. This is generally true, with some conditions: (a) Joshua should gather up the fruits he needs for Shabbat only; (b) he should gather them up by hand, and not use a basket or other container. These limitations were put in place by the Sages because they felt that doing otherwise would be too similar to work activities that a person performs during the week.11

Laws of Shabbat
previous
Article #6 of 34
next
Like What You Read?  Give Jews around the world the chance to experience engaging Jewish wisdom with more articles and videos on Aish. It would make your mother so proud and as a nonprofit organization it's your support that keeps us going. Thanks a ton!

23. Bishul - Part 5: Hatmana – Insulating Food
For Every Individual, A Torah Scroll
Allegiance To The Monarch
Meet the Real You: Yom Kippur
Comments
MOST POPULAR IN Jewish Law
Our privacy policy
Aish.com Is Looking for Great Writers