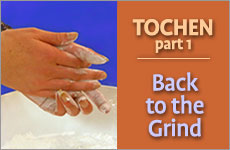 Rules for cutting up your vegetable salad.

Now that we've gone through the three melachot involving separating, let's go back to Tochen,1 which we initially skipped over. Logically, Tochen should come between Borer and Meraked, since it involved the grinding of wheat into flour, which took place after all of the unwanted materials were removed.2 (In the Tabernacle, spices were also ground up to make dyes for the curtains.)

As we'll learn, many of the contemporary applications of Tochen do not resemble grinding wheat into flour. This is because Tochen covers any activity in which a substance, whose origin is from the ground, is physically broken down into smaller parts and, as a result, has a new function.3 So a person doesn't have to literally grind something into a fine powder, or even into very small pieces in order to do the melacha of Tochen. 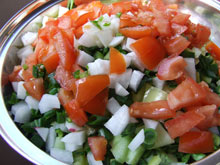 Slicing vegetables for a salad often involves cutting the vegetables into relatively small pieces. Would this be Tochen? The issue is whether the chopping has improved the food – that is, is it now suitable for something that it was not previously suitable for? With salad vegetables, normally we would not use them in a salad if they are whole, so under certain conditions (which we'll discuss below), the cutting could be an act of Tochen.

Moving away from food, let's think about chopping wood into wood chips. The smaller pieces of wood are an 'improvement' over the original piece, since they can be used for various purposes that a larger piece cannot. This sounds just like the salad vegetables, so chopping the wood is also an act of Tochen.

From all of this, what's the bottom line? Fortunately, the halacha provides us with guidelines.

When Does Tochen Not Apply?

We've just seen that Tochen appears to be a very broad melacha, covering many scenarios. In fact, it is limited in the following ways:

Limitation #1 – Only items whose origin is from the ground (in Hebrew, Gidulei Karka)

We've seen this concept with other melachot (e.g., Me'amer). What's the logic here? Most basically, the act of Tochen in the Mishkan was done with food items that grew from the ground (namely, wheat and spices).5 So the melacha was patterned after this.6

In contrast, foods that do not grow from the ground, such as eggs, cheese, fish, and meat, may be chopped or cut into small parts. This applies so long as the food is edible on Shabbat; inedible items like raw meat may not be chopped or otherwise made into smaller pieces.7

Note that many non-food items are subject to Tochen, since their origin is also from the ground – e.g. rocks, mud, and salt.8

Limitation #2 – Only items that have not been ground previously

When we have a baked good, such as a piece of bread, the flour that it is made of was ground from the original wheat kernels. So the end product – the bread – is considered to have been already ground once. Therefore, it may be ground up now (e.g., you may crumble it into your soup9). The act of grinding, at this point, does not improve the food in any way, so this action is allowed.10 Similarly, one could 'grind' chocolate. In halacha, this is called Ain Tochen Achar Tochen – "there is no [problem of] grinding something that's already been ground."

Limitation #3 – Immediately before use, if you make larger-than-normal pieces

Back to our salad. Based on what we've said, it would seem that you are not allowed to prepare a salad on Shabbat. However, by applying this third limitation, chopping or slicing vegetables into smaller pieces11 is allowed so long as it is done right before eating. (As we learned with Borer, this doesn't mean literally the minute before. The halacha views a meal as one unit of time, so you may prepare the salad just before you sit down to begin the meal.)12

What is the rationale for this limitation? The laws of Shabbat do not prohibit any activity that is part of the act of eating. Rather, they prohibit activities which are preliminary to eating, such as winnowing, separating, and the like. When we grind or chop a food (in order to then eat it), this is seen as part of the process of actual eating. Therefore, it is not viewed as a melacha.13

Nevertheless, even where we are allowed to 'grind' a food for immediate use, we should cut it into slightly larger pieces than usual.14 One contemporary sage has set a standard: The pieces should not be cut so small that they could be swallowed without chewing.15

Note, however, that this leniency applies only to the eating process, and thus does not apply to non-food items.

The Talmud gives a suggestion for how Tochen can be done without violating the melacha. It notes that you are allowed to grind pepper by striking it with a knife handle, which is not the normal way of crushing peppercorns.16 Doing the action with this change (known as a shinui) takes it out of the category of prohibited activities.

This exception to the rules of Tochen is limited to this one instance – that is, grinding or mashing a food by using the back of a utensil. Other 'unusual ways' are not accepted in halacha.17

You should also use a shinui in the choice of cutting surface – e.g. using a bowl instead of a cutting board.18

Our discussion so far has given us an understanding of the basics of Tochen. Before we close the lesson, two points:

Specialized utensils – even when permitted to grind or chop by hand, you are not allowed to use a tool specifically made for Tochen-like activity, such as a grater. This is viewed as being too much like "everyday activity" (in Hebrew, uvda d'chol).19

Mashing – How about mashing something, like a banana, avocado, or cooked potato? Here, you're not cutting the item into smaller pieces, but you're changing the shape and texture of the mass. Some Sages hold that this is Tochen because the change in the food is so significant; others disagree.20

The recommended approach is to use a shinui, like mashing with the handle of a knife or other pieces of silverware. This will satisfy even those opinions that view mashing as an act of Tochen.21

The key factor here is that when you mash the item, be careful that it stays connected together as one solid mass, rather than breaking up into tiny pieces. For example, in mashing a baked potato it often crumbles apart; this would be a full-fledged act of Tochen.

12. Borer - Part 2: Sorting Things Out
Should I Break Up, Get Engaged or Keep Dating?
Time Is Your Precious Commodity
A Constant World in Flux
Comments
MOST POPULAR IN Jewish Law
Our privacy policy