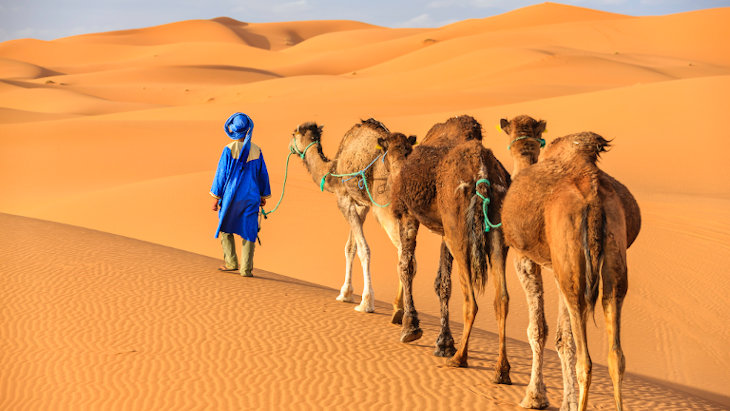 The New York Times was wrong: Archaeological data about the camel actually affirms the accuracy and antiquity of the Genesis accounts.

Didn’t the New York Times once report there were no camels in Israel until long after the patriarchal period detailed in Genesis?

Since the release earlier this year of my book, Ani Maamin: Biblical Criticism, Historical Truth and the Thirteen Principles of Faith, this has been one of the questions most frequently posed me.

The NY Times piece was an exercise in journalistic sin.

Imagine if a technology reporter for the NY Times were to file an article about a modest improvement in TV screen resolution with the title: “Television Invented!” His editors would pillory him because televisions have been around for decades. They would accuse him of overdramatizing just to create clickbait. That is what should have happened here.

For decades, scholars have known that there is no archaeological evidence of camels in Israel until the 10th century BCE, the time of David and Solomon. And many have long surmised that references to camels in Genesis – detailing the lives of the patriarchs hundreds of years earlier – are anachronistic. In 2014, Tel Aviv University archaeologists moved the needle by the tiniest degree, claiming that camels arrived in Israel in Solomon’s time, and not a few decades earlier, under David. Their study hardly registered a blip in academic circles. It made no mention of the Bible at all. But a science reporter for the NY Times decided to make a mountain out of a molehill. “Camels Had No Business in Genesis” screamed the title. “There are too many camels in the Bible, out of time and out of place,” the piece claimed.

But that was hardly newsworthy – many scholars had been saying that for decades. The NY Times threw journalistic integrity to the winds to undermine the religious right. And what better way to subvert the Bible Belt than by belting the Bible itself. To borrow a New Testament proverb: it is easier to thread a camel through the eye of a needle than it is to get an article affirming the Bible into the pages of the New York Times.

But if the paper of record says so, it must be so, and ever since, the faithful have persisted in a struggle to align faith with reason and the drama of the dromedary has continued unabated.

But it turns out that the NY Times article was not only sensationalist but incorrect. Camels in Genesis are right where they belong. It is true that camels were not domesticated in Israel until the time of Solomon. But read Genesis carefully and you see that all its camels come from outside of Israel, from Syria, Mesopotamia, and Egypt, where there is ample evidence of domestication of the camel during the period of the patriarchs.

Abraham’s camels are part of a gift package from Pharaoh in Egypt (Gen 12:16). Note the order of the gifts: “He received sheep and cattle, donkeys, male servants and maidservants, she-asses and camels.” Although male- and maid-servants are paired, donkeys and she-asses are not. They serve different functions. If you wanted to schlep something in ancient times, you used a donkey. But if you wanted to ride in style like a noble, you rode a she-ass (cf. Gen 49:11; Jud 5:10; 1 Chr 27:30). Camels are the marquis gift on the list. Not yet widely domesticated in Egypt, the camel was a status symbol with a heavy payload: a Hummer with a hump.

Fast-forward to this week’s Torah portion. Abraham’s servant – Eliezer, according to the midrash – sets off for Aram to fetch a bride for Isaac. He wants to make a splash. That’s why it says he took the best of Abraham’s finery and 10 of his master’s camels (Gen 24:10). Camels were a rare commodity, coming from Canaan. What better way to impress Laban’s household than by showing up with 10 Hummers to bring home a single girl. No story in the entire Bible maintains such a sustained focus on a species of animal as does this story on the camel. The fact that it mentions camels 18 times speaks to the impression they made on the house of Laban concerning Abraham’s wealth and prestige.

But what about the camels that carried Joseph off to Egypt (Gen 37:25)? Here, too, Scripture tells us that the camels arrived from outside of Canaan. And just as the spices they bore surely came from the east, so, too, we may surmise, did the camels. And while Jacob rode camels on his trek back from Mesopotamia (Gen 31:17; cf. 30:43), nowhere in Genesis does anyone ride a camel originating in Canaan. In the Joseph story, the brothers descend to Egypt exclusively on donkeys (Gen 42:26–27; 43:24; 44:3.13); that’s what people rode in Canaan. And thus when Joseph sends them to fetch Jacob, he provides them with donkeys and she-asses (Gen 45:23); those were the animals they knew how to handle.

The NY Times report claimed that the presence of camels in Genesis could be explained only if the stories were composed when camels were widespread in Israel, toward the end of the First Temple period. But the Genesis narratives reveal an awareness of the diffusion of the camel that matches the reality hundreds of years earlier, a reality that a writer at that later time would not have known.

The camel has a single hump;
The dromedary, two;
Or else the other way around.
I’m never sure. Are you?

I’m sure the dromedary has a single hump. And I’m sure that the New York Times coverage got things “the other way around.” Camels in Genesis appear right where they should be in the patriarchal period – and, on that score, that’s all the news that’s fit to print.

This article originally appeared in The Times of Israel.

The Origin of Life
Chukat 5782: Let’s Play the Blame Game!
The Sin of Moses: The Two Ways to Communicate
In Aftermath of Chicago’s July 4th Shooting, Local Moms Provide Countless Points of Light
Comments
MOST POPULAR IN Land of Israel
Our privacy policy