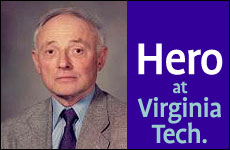 Professor Liviu Librescu, a Holocaust survivor, was shot as he shielded the classroom door so his students could safely escape.

When Professor Liviu Librescu set off to work at Virginia Polytechnic Institute on Monday morning, did it ever occur to him that he would die while saving his students' lives that day?

The 76-year-old aeronautics professor, a Holocaust survivor, was shot by a crazed killer as he shielded the classroom door so his students could safely escape.

While the massacre at Virginia Tech generates shock waves worldwide, the death of Professor Librescu stands out. He is hailed across the media as a hero -- and even that title seems meager compared to his self-sacrifice.

The published facts are somber and stark: Librescu survived the Holocaust, then trained and began his career in communist Romania until he was hunted down for the "crime" of lack of allegiance to the regime. He eventually escaped to Israel in 1978 and then relocated to Blacksburg, Virginia in 1986 where he was highly regarded in Virginia Tech's engineering science and mechanics department. Students and friends describe him as kind, generous, hard-working, and good-hearted, but they never could have imagined the depth of his fortitude until that fateful Monday.

"My father blocked the doorway with his body and asked the students to flee," Joe Librescu, one of Professor Librescu's two sons, told the Associated Press from his home near Tel Aviv. "Students started opening windows and jumping out."

A local Virginia newspaper, The Daily Progress, interviewed Josh Wargo, one of the last students to jump out the window to safety. In the moment before he jumped, Wargo looked back to see his professor determinedly barricading the door shut.

"I was in the back of the classroom when this happened. Immediately after I saw students jumping out of the window and almost instinctually I followed them," said Wargo. "I have recently learned from another classmate going out the window that [he and I] were two of the last students to make it out safely. If Dr. Librescu was not at the door, I don't know what would have happened to me."

Caroline Merrey, another student saved by Librescu's bravery, recounted her experience to the Roanoke Times. "I just remember looking back and seeing him at the door," the Virginia Tech senior recalled of her professor before she escaped out the window. "I don't think I would be here if it wasn't for him."

This is a man who risked his own life in the spur of the moment to save his students; who suppressed his own self-preservation instinct so that others could live on. A man who survived the horror of the Holocaust, then went on to be persecuted by the oppressive communist regime in Romania. If human accounting governed the theatre of life, this is a man whose many years of suffering would surely seem entitled to live out his life in comfort and die peacefully, surrounded by family and friends.

There are those who can transform an instant into a lifetime achievement.

But it was not so. Instead, Liviu Librescu was killed by Seung-Hui Cho, who shot the professor and left him to die alone. Librescu perished in the classroom, the place where his son testified that his father "felt most at home." Is there a more immortal way for mortal man to die than by enabling countless others to live?

He received a proper Jewish burial in Israel, thanks to strenuous efforts on behalf of Chabad and the Jewish community members in Virginia and in accordance with the wishes of his wife, Marlena.

How ironic it is that Librescu survived the hazards of the labor camps and ghetto during World War II and escaped the iron rod of tyrannical oppression in Romania, only to perish inside the serene, insular walls of a university campus. Even more incongruous is the fact that he was murdered on Holocaust Memorial Day -- Yom HaShoah.

President Bush paid tribute to Librescu's outstanding heroism during an address at the United States National Holocaust Museum. "With the gunman set to enter his class, this brave professor blocked the door with his body while his students fled to safety," Bush said on Wednesday.

In an about-face, the Romanian government conferred upon him a post-mortem honor in the form of The National Order -- a medal featuring two crosses. Dubious tribute for the Jewish hero, but his selfless actions will long be remembered not only by the students he saved, but by all who hear of his bravery.

The widely circulated photograph of the slain professor shows him with an almost ethereal quality -- his eyes lifted upward slightly, as though deep in thought, his mouth turned up in a tiny smile. Doubtless, his thoughts were complex; he was renowned internationally for his academia and expertise. But his countenance is devoid of bitterness or enmity despite the hardships he underwent.

As they recall the nightmarish events of that terrible Monday in April, the students who escaped from Dr. Librescu's classroom will doubtless remember forever this gentle man whose mild demeanor clearly belied the core of steel that prompted his final sacrifice.

There are those who can transform an instant into a lifetime achievement. Liviu Librescu exalted his final moments by saving countless young lives. His legacy of heroism and sterling character burns bright as we mourn his passing.

Six Million People Have Died from Covid
What Makes Eli Run?
The Tyranny of Materialism
Science Enters the Mysterious Inner World of Consciousness
Comments
MOST POPULAR IN Current Issues
Our privacy policy