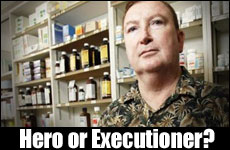 How would Jewish law view the controversial case of Jerome Ersland?

Antwun Parker took the ski mask from his pocket and entered the Reliable Pharmacy in Oklahoma City, with his gun-toting accomplice, with the intent to rob the store.

Jerome Ersland, the pharmacist, stood behind the counter doing the chores at closing time. He kept two guns near his work station in case he would ever need them. A retired colonel from the U.S. Air Force, he had the skill to use them.

As the two would-be robbers entered, they shouted their arrival, waved the gun and demanded drugs. Jerome Ersland stealthily took out his weapon and shot Antwun Parker once in the head, and he fell unconscious to the floor. Parker's accomplice ran out of the store before Ersland could shoot him too.

All this is caught on a surveillance camera, with a digital clock indicating the time sequence. Racing out after the fleeing criminal, Ersland, age 57, ran into the street, but his young adversary easily outran him. Ersland is next seen re-entering the pharmacy, calmly walking past Antwun Parker lying on the floor. Going behind the counter, the pharmacist takes out another one of his guns, walks back to where Parker lies prone and shoots him five times in the chest and stomach. This ended Parker's life at age 16.

Ersland calmly went back to Parker and shot him five times in the chest and stomach, killing him.

When the case was first reported in May of 2009, Ersland was nothing less than a Clint Eastwood style hero. Armed thugs, holding up a pharmacist for his drugs, and getting blasted by a mild mannered hero, a retired military officer now working as a pharmacist. As the Oklahoma City police first examined the surveillance video, and took evidence from the medical examiner, they came to believe that Ersland had indeed acted in a brave heroic manner. When he originally shot Parker, it was not only his own life that he was protecting, but that of two fellow workers. But when he executed Parker with five shots to the trunk, they understood it to be murder in the first degree. He was charged and brought to trial.

On May 26th, 2011, Jerome James Ersland was found guilty of first degree murder, and he is facing life in prison.

What guidelines does the Torah give us that are applicable to this case?

At the heart of the case is the moral dilemma: can one kill an assailant in self defense? Torah law is very clear: it is permissible to kill someone who threatens your life. The great codifier of Jewish Law, the Rambam, addressed such a situation. "If one is faced with an intruder, in circumstances that indicate a robbery, the intruder has no right to life and anyone can kill him" (Laws of Theft, 9:7). Not just your life, but the life of another as well; one is commanded to save them by killing the menacing person.

This sounds harsh and even the Rambam expects us to be bothered by such a dictum. After all, can we kill a man who is only coming to steal money? The Rambam answers:

A robber expects he may meet resistance and is prepared to use deadly force if the owner of the property resists him. Therefore we look at him as someone who is threatening another's life from the moment the robbery begins, and all are commanded to stop him, even at the cost of the robber's life." (Laws of Theft, 9:9)

A jewelry dealer is carrying a fortune of gems when a man accosts him at gunpoint and demands the jewels. "Your money or your life," he threatens. The jeweler takes out a gun and shoots the robber dead. Is the jeweler justified in killing in the thief?

Scenario number two is the same, but here the jeweler chooses to hand over the bag, believing it is the surest way to save his life. As the robber takes the gems and turns to flee, the jeweler takes out his weapon and shoots the thief dead and recovers his valuable property. Is the jeweler justified in killing the thief in this case?

In the first case, according to Jewish law, since the jeweler's life is threatened, he may shoot and kill his assailant. While there is a clause that says minimum necessary force, no law requires one to be Annie Oakley and shoot the gun out of the robber's hand. One can use whatever is required to insure the safety of the innocent from the hands of violent, threatening people.

In the second case the assailant is fleeing; the jeweler is shooting the robber to get back his property. Jewish law does not sanction such a killing since there is no longer a threat to life. Killing is permitted to save a life, not to save property or to administer your personal version of justice. In the words of the Rambam, "A thief who has already stolen and fled, his life is now protected and he may not be killed" (Ibid 9:13). Recovery of ones property does not justify a killing. Life has infinite value; one cannot put a price tag on it.

Jewish law obligates Ersland to save his workers from harm, even if it means killing the assailant.

Let's apply these basic principles to the Oklahoma case. Jerome Ersland's initial shooting of Antwun Parker was completely justified, and perhaps the only moral response. Since Ersland had the ability to step in and save his workers from harm, Jewish law would obligate him to do so, even if it means killing the assailant.

But once the danger is taken away, the assailant has a right to life as any person does. He can be brought to court and dealt with there. The jury in Oklahoma City unanimously believed that Ersland knew after Parker received the first shot in the head that he was no longer under any threat. The five additional shots were tantamount to murder, execution-style.

The Torah demands equal justice. Our ideas of fairness are deeply influenced by how people dress and appear, and what we know about their reputation.

For me as a 57 year old white man, I identify more with Jerome Ersland, the white pharmacist and retired officer from the Air Force, rather than Antwun Parker, the assailant, a 16 yr old, black thief with a criminal record . But in forming a moral judgment on such a case, justice requires us to ignore these aspects, to be color blind and age blind.

There is a possible defense that under the panic and hysteria of his life being threatened, Ersland was acting without full control of his actions when he shot Parker the second time. This can be combined with his initial heroism to greatly mitigate his sentence, or at least it should.

A friend of mine related a conversation a man had with his son regarding his service in the army. "I'd rather visit you in prison than in the cemetery. If there is any doubt, shoot and save your life." in this case, a jury of 12 said there was no doubt at all. He knew his life was not in any danger whatsoever. If there had been any doubt about it, he most certainly would have been acquitted.

I believe the jury's verdict concurs with a Torah sensibility. Jerome Ersland was perfectly justified in shooting the assailant in the head, and indeed acted morally and courageously in doing so.

Jerome Ersland knew perfectly well he was no longer in the slightest danger when he returned to the store. He committed an unlawful killing when he pumped five bullets into Antwun Parker's torso while he lay on the floor.

His sentence should be significantly less than that of a first degree murderer because of the intense and hard-to-fathom emotions he was acting under. We cannot expect people to be rational actors when acting in such emotion packed events.

I bet you have a different opinion. Let me know what you think in the comment section below.

Yom Kippur and the Lessons of 9/11
Morality and Abortion: Three Views
There Are No Limits
Adam and Eve Were Vegan
Comments