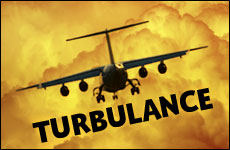 How to escape from the overwhelming pressures of our daily lives.

The airplane was fighting the air, beating up the clouds, banging back and forth. The wings were swinging. This is where I'll die, my friend thought. The plane dropped and popped up again and again. The seatbelt was buckled tight, though she knew that that wasn’t what was going to save her. She said the only chapter of Psalms she knew by heart. Over and over again.

“Oh God, please get me out of this!" she cried. Terrified, she was forgetting to breathe.

Her panic was interrupted by something Rabbi Elimelech Goldberg, founder of Kids Kicking Cancer, said: A pain in the toe is in the toe. It need not take you over completely.

This need not take me over completely, she said to herself. So she pulled out some inner strength: Imagery. She closed her eyes and tried to think of a place where movement of this kind would be normal. A jeep ride. I am on an off-road jeep ride, driving over rocks, bouncing on dirt mounds, she mused. Breathing returned to her for a minute, but she could not convince herself of this reality much longer than that, and went back to her jaw clenching prayers, and the dispersed, Please God save me from this!

More sounds of vomiting. She looked a few rows back. There was a mother sitting in between two children. She was passing a flimsy bag from one child’s chin to the other child’s chin. The bag wasn’t doing much. The children were covered in vomit. The mother was covered. A mother on a plane alone with two small children vomiting at once. Is there anything worse than this?

My friend unbuckled her seat belt and stood up, grabbing at the back of seats to keep from being thrown. She got the attention of the flight attendant and took paper towels from him. She brought the mother another sick bag and held a bag for one of the children. The children continued being sick for another ten minutes until the plane finally settled onto the ground. She pulled out a bottle of water and a package of wipes and helped the mother with the mess. She gave one of the children an extra pair of pants and her husband carried the child off the plane.

When my friend told me about her experience, I realized there was a great lesson here, and not just a lesson in kindness towards strangers and gratitude to God for her safe landing.

Sometimes you have to be with someone else during their hardship in order to forget your own. My friend was consumed by her own fear, by her own panic. The plane was still in turbulence while she was helping, but she didn’t notice it anymore.

Extending ourselves in kindness to others distracts us from our own hardships and changes us.

It is easy to get trapped in the intricacies of our daily lives; financial issues, spousal issues, child rearing dilemmas, illness. And it takes us over sometimes, making us no more than the plate of challenges given to us. Our complaints become us. We become our own baggage. And in effect we stay caught up in our own lives, seeing it only from one point of view: our own.

Extending ourselves in kindness to others distracts us from our own hardships, even for a short while, and leaves us changed.

A friend of mine is a self-appointed kindness organization. She will raise money for an orphaned bride, buy a poor boy a bar-mitzvah suit, find an easily accessibly apartment for a woman with a debilitating sickness. My friend has a bad back. Her husband has unstable work. She just had surgery on her teeth that kept her from her job. She could easily be consumed in her own life, but her hardships don’t consume her. And she isn’t in denial either. She mentions her lack of sleep, her aches, her husband’s extensive traveling time just to make a small wage. But talk to her about the people she helps, and she shines. Be with her while she is performing a kindness, and her aches are temporarily forgotten.