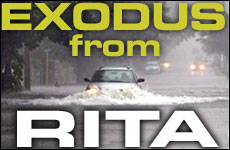 As we drove for hours to get out of Houston, we were hoping for a miracle.

The weather predictions were fearsome: At some time on Saturday morning, Hurricane Rita was likely to wipe out half the city of Houston: winds of 150 mph would blow the roof off our house, and then the torrential rains would cause massive flooding.

On Thursday afternoon, in an effort to get out of Dodge, we -- my husband, our three boys, our former Israeli settler friend Gershom, who believed that this was a tit for tat with Gaza, saying one good evacuation deserves another, and I -- drove in our aptly named "Odyssey" about 70 miles east in 5 1/2 hours, until that area (Beaumont, TX) was told to evacuate also, causing the road to become a virtual parking lot.

Afraid that we wouldn't find gas anywhere, and now caught in the eye of the storm's path like a sitting duck, we decided to turn back to Houston and remain there for the duration. In no way did we want to literally "ride out the storm" in our car as it appeared that so many other people may have had to do given the traffic and gas shortage situation.

Storm trackers moved the prediction of Rita's landfall exactly in the direction we were headed.

Why we were heading east? At that point everyone else in the mass exodus was gridlocked heading west to Austin or San Antonio or north to Dallas. So rather than clog those arteries some more we decided to outsmart them and the storm by heading in the opposite direction. It was only after we were in our car for several hours that the storm trackers moved the prediction of Rita's landfall exactly in the direction we were headed, landing us with a big "uh-oh."

Now where would we go? I-10 east was a mess after Katrina. Such a big country with no place to go! Who would believe it? And without gas we wouldn't get very far anyhow. (Good time to have had a hybrid car.)

But even though we couldn't arrive at a destination, with just a few calls on a cell phone, the Jewish communities of Dallas and Memphis were mobilized and ready to accept Houston's Jewish evacuees. So were we to actually make it to one of these dream cities, we would have been put up in comfortable homes with kosher meals, no questions or references asked! What amazing solidarity -- how great to be a Jew!

In the end, we only spent six hours in the car with a destination to nowhere. (How do you answer "are we there yet?", when you're not even moving and for that matter don't even know where you're going?!)

We returned home and on Friday we needed to get ready for Shabbat. My home looked like it had been hit by a hurricane -- before we evacuated I'd taken everything off the walls and off the floors. (Of course, my house was not the paragon of order to begin with. Indeed, one of my biggest fears was that the insurance adjuster would walk through the house after the deluge and say, "But your neighbors all tell me that your house looked like this even before Rita arrived!")

Anyhow, still afraid that our own home would flood, we ended up staying in the home of our friends around the corner, as their house is a veritable fortress. We had lovely meals with wine and challah and delicious barbeque that we'd cooked up after collecting everyone's frozen meats that would likely get spoiled in a power outage.

No cars on the street, nobody going to work, no money to be made or spent.

The amazing thing about this Shabbat is that the entire neighborhood, if not the entire city, was Shomer Shabbat for perhaps the first time in history -- Jew and non-Jew alike! There were no cars on the street. There was nobody going to work. There was no money to be made or spent. There was just a true calm before the storm, a true Shabbat Shalom. It was like Mea Shearim right here on Texas, if you could imagine!

In the end, Hurricane Rita was barely a minor tropical storm. A little wind, a few drops of rain, nowhere near what we had been led to anticipate by the ceaseless media reports we had been hearing for days.

In fact, without meaning to complain, it was all a bit anti-climactic, with not even enough rain to water the grass which has been thirsty for weeks. Here it is we are telling the kids about this major hurricane and packing up like lunatics and then driving to nowhere, with life and death decisions regarding our gas gauge, and then there is barely a tap at the window. Talk about crying wolf -- who knows if the children will ever believe us again!

All of us here in Houston had been faced with the idea that much of our lives could be, if not destroyed, than completely and indefinitely disrupted -- a la New Orleans -- and that possibility has certainly been sobering --especially with the Days of Awe approaching.

God has shown us His infinite kindness, and we must not take it lightly. Just an inch more on the radar map and Houston would have been devastated. (And of course there is also the miracle of the oil for those who made it to safe haven hours away on only one tank of gas.)

For us, we are grateful and looking forward to the High Holidays, culminating in Sukkot when we leave our homes. For after all, I thought I'd be celebrating all holidays in the Sukkah this year, not just Sukkot!

Wishing you all a sweet and safe new year!

Holly Pinchevsky-Cin is happy to still be living in Houston with her husband and three children.

The Cancer of Anti-Semitism in Europe

How a Spate of Synagogue Bombings in the 1950s Is Impacting Us Today
Grilled Israeli Lamb and Veggie Kabobs Recipe
Pain is a Reality; Suffering is a Choice
The Promise Of The Land
Comments
MOST POPULAR IN Society
Our privacy policy