Where Was God in Virginia Tech? 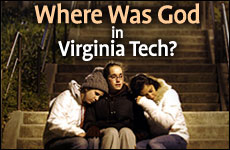 God's seeming indifference is in fact an expression of His greatest gift to mankind.

In the aftermath of the bloody carnage on campus unparalleled in American history, politicians may turn this into a plebiscite about gun control. Far more pertinent is the problem of God control: How could a benevolent deity have looked on passively and permitted an act that horrified all of us who heard about it?

As a friend of mine put it so powerfully, "If God really runs the world, what happened at Virginia Tech proves He ought to be sued for malpractice!"

But what is our response to acts so heinous we cannot conceive of any Higher Power permitting them to happen? Why was God in hiding? Where was His hand when a Professor who survived the holocaust demonstrated heroism by choosing death as a means of saving his students? Could not God too find a way to intervene to save at least some of the 32 victims?

As we watched the events of that horrifying Monday unfold I was sure no one could be unmindful of the remarkable synchronicity. The day had special meaning for us in yet another powerful way. This of course was Yom Hashoah, the commemoration of the Holocaust and its six million victims. Then and now, for the genocidal Nazis and for the suicidal student, it is the silence of God in the face of evil that most perplexes us.

Why does God allow unimaginable iniquity?

The theological problem demands an answer. And as hard as it is to accept we must ultimately grasp that God's seeming indifference is in fact an expression of His greatest gift to mankind.

God created us in His image. What does that mean? He intended us to be like Him – masters of our own fate, deciders of our destiny. God gave us the ability to choose between doing good or evil.

God gave us the free will that could make us greater than angels – or more evil than Satan.

God loves us – and to love somebody means letting that person be himself or herself. The name for that gift which He gave humankind so that we could be ourselves is free will. Without that freedom to choose, we would be no more than puppets acting out a script not of our choosing. God wanted more for us. So God gave us the free will that could make us greater than angels – or more evil than Satan.

Yes, sometimes there are things that happen in the world that profoundly upset the Almighty. But He allows them to happen nevertheless. Indeed He must often restrain Himself. For if God were to always interfere to prevent us from going against His will we would never be capable of really doing good, because we would simply be powerless to commit its alternative!

The very fact that God gave us a commandment, "Thou shalt not murder" shows that we have the choice to obey or to violate it. God warns us not to and reminds us that the consequences of such an act will be very severe, but if a person decides to murder another human being, he may very well succeed. It is not God's will. It is the evil choice of man. But it is God's will that man's choices bear fruit even if death is the outcome.

Consider the first murder in history. It was Cain the wicked who killed Abel the righteous. And where was God? God was the heavenly observer who permitted the free-will act that infuriated Him – and then declared the divine punishment.

And what about poor Abel? Where was justice for the victim?

The problem would be unanswerable if this world was the only place reward and punishment could find expression.

The wrongs of this earth are rectified by a Ruler who has infinity to undo the effects of crimes committed during a lifetime. Martyrs who have suffered on earth merit eternal blessings. According to the teachings of Kabbalah, those who died before their time may be granted another opportunity at life – just as Abel returned once more as none other then Moses. God is powerful enough and certainly wise enough to find ways to set right the unfair consequences of man's misuse of free will.

So God was in Virginia Tech. And it should give us some comfort to know that God also wept with us. His silence was far from indifference; it was absolutely necessary by the very nature of the great gift He shares with us – the freedom to act in accord with our will.

Faith allows us to empathize with the Almighty as He mourns the consequences of His willingness to let us choose our actions. And faith gives us the strength to move on in the knowledge that those for whom we mourn will enjoy God's everlasting kindness and compassion.

If You Were God
Bechukotai 5782: Divine Retribution
Behar 5782: Working to Live or Living to Work?
The Wholeness of Being Broken
Comments
MOST POPULAR IN Ideas
Our privacy policy