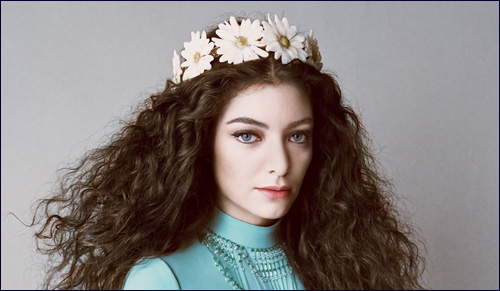 In Israel we don’t "wait for the green light." We honk when the light turns yellow.

Lorde, the New Zealand singer, decided to cancel her concert in Israel. She's not the first and unfortunately probably not the last. But we don’t care. Having Lorde in Israel would have been bad anyway.

Lorde sings songs like "wait for the green light." Don’t try to change Israeli society and tell us how to drive! In Israel we don’t wait for greens. We start beeping when the light turns yellow.

Lorde is famous for the Hunger Games song Yellow Flicker Beat. Hunger is not a game to us. Israelis take hunger very seriously. We try to avoid it like the ten plagues by eating things like rugelach, falafel and shawarma. And laffa. And couscous. OK, sorry I’ll stop now. And hummus.

She was born Ella Marija Lani Yelich-O'Connor but changed her name to Lorde. It takes a lot of chutzpah to change your name to the Creator. We have enough visitors to Israel who get “Jerusalem Syndrome” and claim to be a deity, we don’t need another.

Apparently Lorde is a fan of something called “Netball” – it’s like team handball, on a basketball court, with no backboard or dribbling, and they use a volleyball. Lorde, who are you trying to kid? This is not a sport. It is something that the kids who get picked last at recess play. We don’t need any more people in Israel who support this fake sport. We already have our own fake sport. It’s called matkot.

If I can’t get local kosher meat in your country, I am not coming. How about that?!

Lorde is 21 years old. Her brain is not even fully formed. There is a reason why we quarantine those people in colleges.

I Don’t Have the Money to Go to the Show

Israel is an expensive country to live in so I am not going to waste my once a year show allowance on watching you sing Royals, when I can go to any karaoke joint in Israel and hear any group of teenage girls singing it for free.

Now I Have Money to Go See Israeli Singers Perform

Your boycott of Israel and cancelling of your performance frees up my show allowance to see multiple Israeli artists. See, Lorde, your boycott is bringing more money into Israel. Take that!

The main reason we don’t care about Lorde and the rest of the artists who’ve boycotted Israel is because the great artists come to Israel. Here’s a partial list thanks to Wikipedia where I did all of my research for this article:

As much as I love these artists and thank them for their support of Israel, I must be honest and tell them that I still can’t afford to go to their shows.

The True Magic of Harry Potter
Why Are The Prayers Of Yom Kipur So Repetetive?
Ha'azinu 5783: A Time for Unity!
Twisted Thinking
Comments