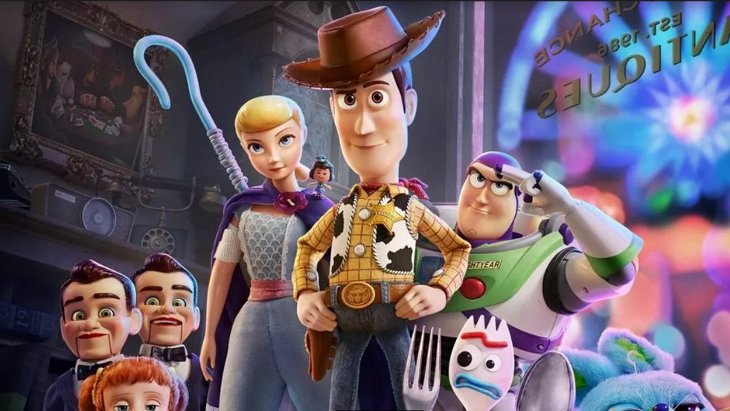 The hit film delves into some meaty philosophical issues.

Toy Story 4 has arrived, and our fabled friends Sheriff Woody and Buzz Lightyear are back again, along with a bevy of new toy characters that leap to life only when the humans aren’t around. In the previous sequel from 2010’s Toy Story 3, the toy menagerie that had been the beloved playthings of the boy named Andy – now grown and off at college – ended up the property of a little girl named Bonnie.

In addition to spectacular computer animation, Toy Story 4 (written by Andrew Stanton and directed by Josh Cooley) serves up some sophisticated issues in its comedic and heartwarming script. In particular, Woody (Tom Hanks) faces a real identity crisis: how does he learn to accept Bonnie’s apathy towards him? Has his purpose as Bonnie's toy changed when she shows a preference for other toys? On a deeper philosophical level, the film explores the timeless existential question, “What is the meaning of my life?”

When the story opens, Bonnie (Madelaine McGraw) is off for her first day of kindergarten and feeling anxious, so Woody smuggles himself inside her backpack. Watching her struggle to make an art project, Woody surreptitiously tosses her bits of material from the wastebasket – a broken popsicle stick, a bit of clay, two mismatched googly eyes, a pipe cleaner, and a spork. And from these discards, Bonnie makes a new friend – literally.

She names her new flimsy creation Forky (Tony Hale), and is instantly enamored with it. But Forky, very aware that he was assembled from junk, has a serious self-esteem problem. He considers himself garbage and continually tries to hurl himself back into the trash can. Out of his love for Bonnie, Woody must rescue him again and again, becoming a suicide prevention counselor. “I Can’t Let You Throw Yourself Away,” as Randy Newman sings in one of the movie’s songs.

Woody tries to convince Forky that his life has meaning, even if he was made from bits of trash.

This is hard going for Woody, because he is a has-been in Bonnie’s affections. But he also finds a new purpose – teaching Forky the importance of being a toy that a child will adore. This is another poignant theme in the film – the sense of purpose and joy that all the toys either feel – or desperately wish they could feel – by being loved and needed by a child. When a toy refers to “my kid,” kid-less toys ask in wonderment and awe, “You have a kid?” It is “the noblest thing a toy can do” to remain loyal and loving to a child, Woody says.

Woody tries to convince Forky that his life has meaning, even if he was made from bits of trash. But Forky will have none of it. In frustration, he says to Woody, “I was meant for soup, salad, maybe chili, and then the trash! I’m litter! Freedom!”

“You’re Bonnie’s toy,” Woody explains. “You’re going to help her create memories that will last her the rest of her life!” It takes time for Forky to understand that he is much more than the sum of his parts, and that it is not his fate to have the “freedom” of living without purpose or responsibility. Once he exists, his life has purpose.

Toy Story 4 doesn’t overwork this theme because it is too busy building a storyline that involves Bonnie’s family taking a road trip in an RV filled with all Bonnie’s toys. When the still-suicidal Forky jumps from the RV, Woody goes out to search for him. Along the way back to the RV, they encounter the “Second Chances” antique shop, where Woody recognizes a lamp that belonged to another former toy-friend from previous days, Bo Peep. Woody searches for her in the shop, but only discovers Gabby Gabby (Christina Hendricks), a wide-eyed, lonely, and slightly spooky doll who waits in vain for a child to buy her and love her.

Most of the rest of the action of Toy Story 4 involves plans to rescue Forky, who is toy-napped by Gabby Gabby’s gang of sinister ventriloquist dummies. Gabby Gabby was born without a working voice box, and this defect has left her “unmarketable” and alone for decades. From her perch high in the antique store, she watches shoppers come and go, often with children, but none of them think of making her a toy to be cherished in her own right.

Gabby Gabby holds Forky ransom – the price is Woody’s working voice box. Yet Woody’s main concern is rescuing Forky to return to the inconsolable Bonnie. Woody gets a huge assist in this quest when he finally reunites with Bo Peep (Annie Potts) in the nearby amusement park, where she has become a tough, self-reliant leader, no longer any child’s precious toy. Woody is in love with Bo Peep, but she loses patience with him because she thinks he is living in the past, “clinging” to a child who no longer needs him. “You can’t just wait for life to happen,” she chides Woody.

The film’s most daring theme, that of finding meaning in life even when you were made from scraps, is a deeply Jewish idea. The first man, Adam, was made “from the dust of the Earth,” yet his life was profoundly consequential, as all our lives are meant to be. Bonnie made Forky with intent, and therefore he mattered to her. God also creates us with intention; therefore, our lives have meaning. We are not here by accident.

And just as the toys find their deepest happiness in being needed and loved, so does Judaism emphasize a life of giving more than of taking. The word for giving, “hav,” is the root for the word for love, “ahava,” because the more we give, the more we love. And finally, even when one phase of our lives ends, we can always find a new purpose or goal. As Buzz Lightyear (Tim Allen) always likes to say, “To infinity – and beyond!”

Gravity
Bechukotai 5782: Divine Retribution
Behar 5782: Working to Live or Living to Work?
The Wholeness of Being Broken
Comments
MOST POPULAR IN Art Smarts
Our privacy policy