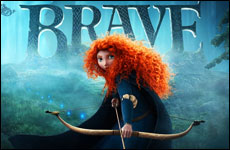 Don’t go for the quick fixes even though the longer ones, well, take much longer.

There are several things that I learned from Pixar’s new movie, Brave.

There are several things that I learned from Pixar’s new movie, Brave.

I learned that teenage girls and their mothers might not always get along. Who knew?

I learned that a lot of us might think that we have it hard, but princesses have to learn things like how to act like a lady so they can someday take over the entire kingdom, EVEN IF THE PRINCESS DOESN’T WANT TO LEARN ANY OF THAT STUFF. How unfair is that?

I learned that if you run into a witch-slash-woodworker who’s obsessed with making little carvings of bears, you shouldn’t just vaguely ask her to change your mother and not specify that you don’t mean INTO A BEAR.

But mostly, I learned that there are no quick fixes in life. It only took me two hours.

It’s very tempting to try quick fixes, because who has time for the longer ones? You can diet and exercise and never eat anything you like, or you can get liposuction, which takes two hours, and you get to go home with a souvenir – if you ask.

The issue, of course, is that the amount of time the solution lasts is directly proportional to how quick the fix was. If you get liposuction but don’t learn to eat right, you’re going to bulge right up to that size again after your sister’s wedding.

The classic example of a quick fix, besides duct tape, is putting a bucket under a leaky spot in the attic. But that fix lasts only as long as your bucket. If you don’t hire someone to plug the leak, you’re going to be putting buckets under the hole for the rest of your life. And what happens when you go on vacation?

Quick fixes especially don’t work when it comes to interpersonal relationships. In the movie, Princess Merida has problems with her mean, evil mother who’s trying to do what’s best for her. So Merida tries all of the classical quick fixes, or some magical princess version thereof:

At the beginning of the movie, Merida is presented with a choice of three suitors – all firstborn children of local lords, and all of whom by just looking at them shows the downsides of royal inbreeding. The lords are going to decide who gets to win her hand by holding an archery contest, which most family therapists will tell you is an excellent idea, and Merida decides to enter the contest, as she is a firstborn herself, and wins her own hand through a technicality in the rules.

That goes over well with her parents – finding legal loopholes.

“Yeah, you said I could have cookies after supper. You didn’t say I had to eat supper. Ergo, I have plenty of room for cookies.”

So now your mother’s upset at you because you won your own hand in marriage, and she has no idea what that’s supposed to mean. Clearly, the best way to deal with this is to rip an expensive tapestry and storm out of the house. That’ll fix everything.

A lot of kids, at some point, consider the option of running away from home, although most of them return as soon as their DS runs out of batteries.

Once in the woods, Merida stumbles across a witch, from whom she purchases a cake that will change her mother’s mind.

It’s kind of like when you’re on the road, and your kids are having border disputes in the backseat, and you yell, “Stop fighting back there!” Like your kids are going to say, “Oh. That didn’t occur to us. That’s a GREAT idea!” No; as soon as your “suggestion” wears off, they’ll start fighting again.

And no, I don’t have a solution. Every situation is different, and it’s not easy to find the long fix. Part of the appeal of a quick fix is that you can get it in a store, and it will sort of work for everyone. You can buy a bucket in the store, but you can’t buy a plug for your exact hole. You have to call a guy for that.

Because yes, you can get a magic potion that’ll change your mother’s mind about whom you should marry. It turns her into a bear. On the pro side, bears don’t care who their kids marry. On the con side, your mother’s a bear.

A big issue with quick fixes is that a lot of times they lead to bigger problems. You can put a bucket in your attic, but how are you going to carry a full bucket of water down a ladder with one hand? You can run away from home, but does that really solve more problems than it creates?

Okay, your mother’s a bear. The quick fix is that you go back to the witch and have her click “undo”. You think the witch sits home all day waiting for people to come by for refunds? No, she leaves you messages in the form of riddles, such as “Mend the rift torn by pride.”

If someone says something you didn’t quite understand, you can hear what you want to hear, and choose an explanation that requires the least amount of effort. Merida hears the riddle and thinks, “Well, obviously, she means I should fix the tapestry.” Yeah, that’s important. And this leads to the action climax of the movie, which is sewing. Sure, it’s extreme sewing – in the dark while riding a horse with three bears on her back. But it’s still sewing.

Sometimes it’s hard to think of anything but the quick fix. But listening is the first step. A lot of people, parents and kids especially, think that the quickest way to end a fight is to yell in each other’s direction. To save time, you can both yell at once, over each other, and the louder you yell, the quicker everything will be fixed. All of this saves valuable time that you can use to slam doors.

Really, it’s about listening – getting to the heart of the matter and realizing that your mother wants to tell you what to do because she’s worried that there are no other good options for you, or that your daughter might have an option that actually makes sense.

What saves the day in the end isn’t any one act. There’s no magic cake that can fix everything, despite what Jewish mothers will have you believe. The “rift torn by pride” was the relationship, which was strengthened gradually, over the course of the movie – by the two parties spending time and paying attention to each other. Merida’s mother comes to understand her way of life, and Merida learns that it’s not easy taking care of a being who eats weird things, smashes into furniture, growls periodically for no reason, keeps losing sight of their goal, and knows she won’t like foods that she hasn’t even tried. She learns that her mother wants what’s best for her, and the answer is not to find a way to change her mind so she won’t want what’s best for her.

The movie argues that if you want to teach your child important life lessons, get her a pet. Bear.

Maybe the actual spell wasn’t the quick fix of turning her mother a bear, but the journey of, “Okay, your mother’s a bear. What do you do next?”

Just because you haven’t thought of an answer yet doesn’t mean there is no answer. Answers can come. It might be a journey you have to go through. There are a lot of situations in life that have a “quick-fix” option, but just because, with the tools you have right now, you can’t see anything but the quick fix, that doesn’t mean there is no other fix. Sometimes God gives us a problem as an impetus to grow new tools.

Why Kosha Dillz, the Rapper, Is Pickled
What Makes Eli Run?
The Tyranny of Materialism
Science Enters the Mysterious Inner World of Consciousness
Comments
MOST POPULAR IN Jewlarious
Our privacy policy