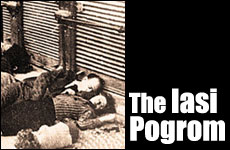 My father was the chief rabbi where one of the most violent pogroms in Jewish history took place.

My late father (z”l) was a special man – scholarly, pious, wise. A man whose eyes spoke of understandings unfathomable to me when I was young and whose strength and full impressiveness only come into clearest focus as I myself have gotten older.

Parents are always something of a mystery to their children. Those parents who lived during the horrors of the Shoah often remained an ever deeper mystery to their children, as if the pain of that time rendered parts of them unreachable. It wasn’t until a few very short months before my father passed away that I began to truly unlock that awful past in his life.

As I was going through his briefcase where he kept his most important and closely-held papers, I found a document written in Romanian, a language that I knew to be part of my family history but which I could neither read nor understand.

I turned to my sister, Miriam, for help. Miriam, ten years my senior, had been born in Iasi. Romanian had been her first language.

“Miriam, what is it?” I asked, troubled by her reaction.

It was several minutes before she could speak. “Now I understand,” she whispered, bending down and picking up the document I had given her, “now I understand everything…”

My sister had suffered throughout her life, tormented by unimaginable nightmares that robbed her of sleep and sanctuary. The document I had given her described her nightmares perfectly – skeletons tossed haphazardly to the side of the road, bodies hanging from lampposts, Jews driven to their knees, shamed in the public square.

My sister's “nightmare” had been real.

The document recorded the testimony of a survivor of the Iasi pogrom.

It was not the fantasy of a nightmare she read in that document. It was cold, harsh truth.

Miriam had been just three years old when the pogrom occurred but the images that the witness documented had been seared into her young imagination, returning in nightmares to torment her anew throughout her life. 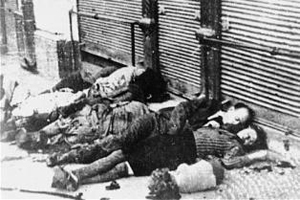 The “nightmare” had been real.

Iasi was not the first, nor the last, of the pogroms visited upon Jewish communities throughout Europe during those horrible years. But Iasi was the community where my father was the Chief Rabbi. Iasi was his community and the community which, after three days of horror during which he was shot in the leg, his leadership was called upon as never before.

The Jews had been in Iasi for over 400 years in June of 1941. Established in the 16th century, the community was highly developed religiously and culturally, as comfortable with its Chassidism, and its Zionism, as it was with its Yiddish theater.

Between 1930 and 1940, the Jewish population grew from approximately 30,000 to over 50,000. On the one hand, it was a perfect, inviting Jewish community. However, on the other, Iasi was anything but inviting. It was well known for its virulent anti-Semitism. Romanian fascists and anti-Semitic students had visited pogroms on the Jewish community in the past, in 1899 and 1923.

The Romanian government never honored their obligation of the 1919 Versailles Conference to grant Jews citizenship.

Jews were never safe there. However, for all the pain and hardship that the community had endured, nothing prepared it for what was to come on June 28, 1941. It was then, as the Axis prepared for war against the Soviets, the horror began.

There had been rumors circulating for days, weeks, and months. False rumors promulgated by the authorities, lies that sought to deflect blame from the authorities and place it on the Jews for the difficulties of the war. Outlandish lies so preposterous as to be unimaginable. Lies built upon more lies. Lies that accused Jews of helping the Soviets in their bombardment of the city. Lies that were accepted and embraced in the non-Jewish community.

Christians protected themselves from the inevitable violence by displaying signs on their homes: “Here live Christians, NOT Jydani!”

Like the electricity in a perfectly blue sky when a thunder storm approaches, there was no doubt what was coming. Christians protected themselves from the inevitable violence by displaying signs on their homes reading, “Here live Christians, NOT Jydani!”

It was coming. It seemed that all of Iasi held its breath, awaiting its arrival. And arrive it did. With a vengeance.

A rocket was launched to signal the start. The rocket’s flare had not faded before death and destruction was visited upon every Jewish district in the city. The attacks had been timed to coincide with the movement of Romanian and German troops toward the Russian front.

“The Jews are firing on the Romanian Army!”

The troops, which had been moving silently forward, suddenly started firing at the houses from which they believed they were being attacked. Panic broke out.

A “thorough” investigation into the event was ordered into the shooting of the troops. Though not a single soldier was found to have been killed or wounded, throughout the night Jews were randomly arrested and taken to a number of collection centers, most to the Police Headquarters.

Throughout the night, Jews were dragged from their homes, from their beds, from their families, and brought to the courtyard of the Police Headquarters. By dawn on that Sabbath morning, more than two thousand Jews had been rounded up. By noon, the number was six thousand.

That Sunday. The bloodiest day in the history of the Jews of Romania. With the mass of Jews corralled into the courtyard of Police Headquarters, soldiers opened fire, killing several hundred even as other soldiers beat individual Jews to death.

Did the screams and wails of these defenseless victims bring about mercy in the hearts of these good Christian soldiers? No. Their hearts were deaf to the defenseless cries of the innocents.

The community had exploded in a vile expression of hatred and evil.

Not just the soldiers. The community had exploded in a vile expression of hatred and evil. Even as the massacre was taking place at Police Headquarters, the pogrom raged like a wildfire throughout the city, striking terror in every Jewish home. 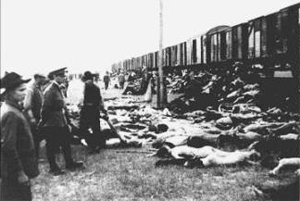 12,000 Jews were arrested and shot outside Police Headquarters. 4,300 more were stuffed into closed cargo vans and cattle cars on trains. 2,650 died of thirst or suffocation. There are those who might argue that those who perished were the “lucky” ones. The survivors suffered excessive physical and mental trauma that, as it did my parents and sister, would torment them throughout their lives.

So began the Romanian chapter of Hitler’s Final Solution.

I.C. Butnaru, in “The Silent Holocaust,” records that during a cabinet session on July 8, 1941, Antonescu proclaimed that his government’s policy regarding the Jews did not trouble him. “It makes no different to me that ‘we’ll go down in history as barbarians’. The Roman Empire performed a series of acts of barbarism according to our present standards, and nevertheless it was the most magnificent political establishment. There has not existed a more favorable moment in our history. If it is needed, shoot all of them with machineguns.”

The savagery was so brutal that even Hans Frank, the German governor general of Poland, seemed to view the Iasi massacre with some distaste. “Has anyone ever seen a massacre of Jews in the streets of a German town? We use the art of surgery, not of butchery!”

What does the spiritual leader of a community so horribly violated do? What does he say? What is the response to an attack so vicious that even a monster like Hans Frank refers to it as “butchery”?

Only the pure flame of God’s truth could burn true in the face of such horror.

Only God’s strength could remain unbowed. 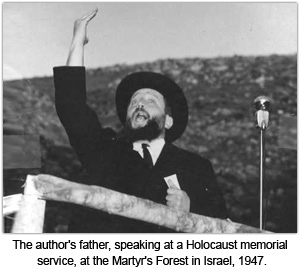 They said that when my father spoke, taught and lectured, flames of fire spewed forth his energy and dynamism. Many who had heard my father teach told me, “Whether there were three students in class or five hundred in a lecture hall, when your father taught, it was the same revelation at Sinai, as if sitting at the feet of a prophet” – nurtured and developed in the fires of destruction that came upon his community.

My father, elected Chief Rabbi of Iasi at the young age of 27, had looked upon the fires of Hell burn his people.

My father, elected Chief Rabbi of Iasi at the young age of 27, had looked upon the fires of Hell burn his people. How could he rehabilitate his own life, let alone the life of his community? How does the leader of a community see its own destruction wrought in such brutal, unspeakable ways and go on? How does he lead? How does he even dream of renewal…?

In his “Masa Hamavet”, Dr. Manfred Reifer writes about Iasi, “the community's leadership, headed by its president, Yosef Jakob, and Chief Rabbi, Dr. Joseph Safran, soon turned its focus to heal its community's wounds which was so severely hit with the slaughter of its sons. First and foremost was the need to establish social aid and support that would extend assistance to over twenty thousand widows and orphans. Even more difficult was the crisis of Jewish schooling.”

My father, in his three-volume work, "Studies in the History of Jewish Education," noted that with such fear and trembling surrounding the community, the leaders of the community nevertheless – with the last of their strength – turned from siege and suffocation to rays of redemption. The past was pain. The future, as difficult as it was to see, held hope.

“There was a need for great focus in the midst of orphaned solitude and overwhelming loneliness to think of revival ...There was a need for all in the community to erect a dam in front of the storm that engulfed our very existence. The saga of endless pain and suffering which equally devastated young and old - also manifested great spiritual strength and fortitude.

In Torah, there is rejuvenation and rebirth.

“The inescapable question confronting us was: in these horrific circumstances, how will we maintain our ancient and sacred heritage, our Torah and its practice? And the answer: We will renew the flames of hope in our hearts and rejuvenate our faith, through education, teaching and learning in schools and renewed prayer.

“And so it came to pass. Jewish schools and synagogues in Iasi were reopened anew. With glances of strength and encouragement teachers and educators turned to their students, attempting to instill consolation within them and to pat them lovingly. An everlasting warm love trembles in my heart remembering those teachers and their students, during those terrible days, trying days for the collective and individual, alike.”

In Torah, there is rejuvenation and rebirth. In the soul of the Jew is great strength. My father was one of the very first scholars to research, study and publish about halachic issues and responsa during the Holocaust.

As my father wrote, “We remain faithful to our past and learn from it in order to sanctify the future. There remains an everlasting and immutable bond between past, present and future in understanding our people.” 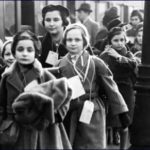 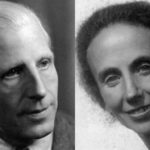