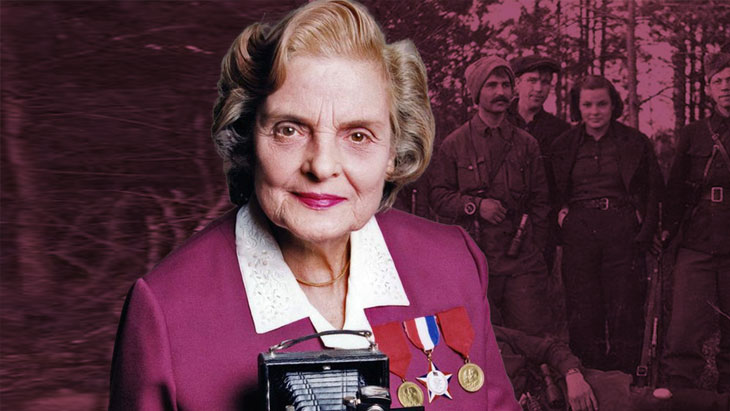 Faye Schulman’s photographs are a rare glimpse into the life of Jewish partisan fighters during World War II.

As a young woman, Faye Schulman witnessed the murder of her family and friends at the hands of the Nazis – and resolved to fight back any way she could. A professional photographer, she documented Nazi massacres. When she joined the ranks of partisan fighters battling the Nazis, Faye continued to document her experiences in photos. Thanks to her incredible bravery and determination, Faye’s story – and the memory of the tragic fates of the Jews in her community – have never been forgotten.

Life in a Jewish Shtetel

In 1939, the small town of Lenin, in eastern Poland, was home to a vibrant Jewish community. Roughly half of the town’s 2,000 residents were Jews. Residents ran several Jewish institutions including a Jewish school, a Jewish library, and a Jewish dramatic society. There were also Zionist youth groups active in the area and several residents moved from Poland to the Land of Israel.

Lenin had one photography studio, run by a local young Jew named Moishe Lazebnik. The Lazebnik family was a large one with seven children, and Moishe’s teenaged sister, Faye, started helping him in his business too.

After Moishe moved away, Faye singlehandedly kept the business going, even after World War II broke out in 1939 and the Soviet Union took over Lenin. The Soviets mandated that Lenin’s Jewish school could no longer teach Jewish subjects; it was turned into a Yiddish-language school that taught Soviet propaganda. The Russians deported five Jewish families who were relatively wealthy and seized their property. Other than these terrible actions, the Jews of Lenin were left alone, relatively protected even as the Holocaust raged close to them in German-controlled lands.

On July 18, 1941, tragedy befell Lenin’s Jews. Nazi German troops conquered the area from the Soviet Union and started implementing their “Final Solution,” with the aim of murdering all of the region’s Jews. About a dozen Jews were murdered immediately by Nazi troops. Some others, including two of Faye’s brothers, were sent to Nazi slave labor camps.

The rest of Lenin’s Jews were imprisoned in a newly built Jewish ghetto and forced to do back-breaking labor. “It was overcrowded, with a lack of food to feed the hungry, and lots of ill people and disease,” Faye later described in a March of the Living commemoration in 2014. 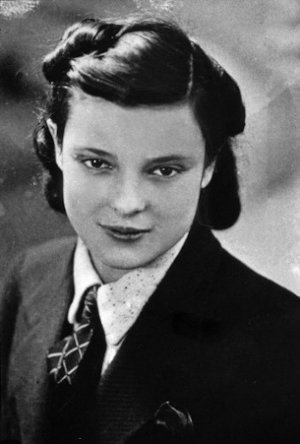 Faye was tasked with photographing local Nazi officials. One day she was ordered to make a portrait of the local Gebietskommissar, the local district commander. “He was like an animal,” Faye recalled. “I knew he’s a killer. I knew he killed already in the thousands.” Despite her revulsion, Faye had to ask the Nazi official to smile for his picture.

As the sweltering summer weeks went by in 1942, Lenin’s ghetto swelled. The Nazis transferred Jews from nearby villages into Lenin. By August, 1942, over 1,800 Jews were imprisoned in the ghetto, and the Nazis planned their complete annihilation of the Jews. The Nazis also planned to document this horrific act and chose Faye Lazebnik to photograph the day’s carnage, as well as other massacres of Jews in the area. 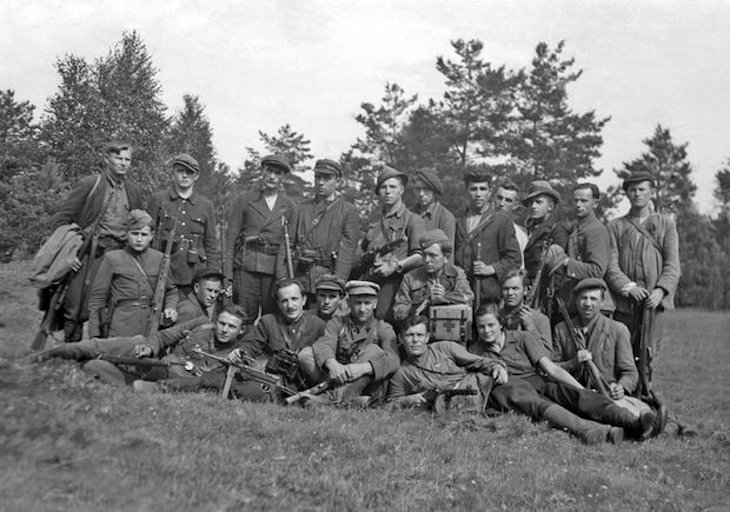 Faye Schulman (third from right, with her Red Cross box behind her head) sits with her partisan comrades in the fall of 1942.

Lenin’s Jewish ghetto was liquidated on August 14, 1942. Approximately 1,850 Jews were forced to walk outside of the town, where they were systematically shot. Their bodies were thrown into mass graves. Faye was spared – along with just 25 other Jews that day. As the Nazis looked on, she was forced on pain of death to take pictures of the mass graves that contained the bodies of her younger sisters, her younger brother, her parents, her friends and neighbors and relatives. Ordered to develop a set of photographs of the harrowing scenes, Faye secretly made a second copy for herself to prove what had taken place.

In the weeks that followed, Faye was forced to photograph other atrocities. Even though Nazi troops controlled the area, local groups of partisan fighters were active. One local partisan brigade was known as Molotova and was made up of escaped Soviet soldiers who hid in the forest and battled Nazi troops, mostly in the heavily forested area of Belarus. During one raid, Faye escaped with them and joined the Molotova Brigade. “This was the only way I could fight back and (a)venge my family,” Faye later recalled.

Joining the Molotova fighters was no easy task. Many of these Soviet men were nearly as antisemitic as the Nazis. Some openly said they’d like to kill Jews. Faye didn’t speak often about her Jewish identity. When she celebrated Passover while she was with the partisans, Faye kept the holiday a secret. For a time, Faye looked after an eight-year-old Jewish orphan girl named Raika in the forest. She recalled having to throw away the little girl’s only memento from her parents – a watch – because she was worried that one of the Soviet fighters might decide to kill Raika in order to steal it.

The partisans desperately needed a doctor. Faye had no medical training but her brother-in-law had been a doctor and that was good enough for the Molotova Brigade. They appointed her nurse, aiding their camp “doctor” who was actually a veterinarian.

When the Molotova fighters ran low on supplies, they raided Lenin and other towns – at times with Faye making up one of their numbers. During one raid, Faye urged the partisans to burn down her family home. “I won’t be living here,” she told them. “The family’s killed. To leave it for the enemy? I said right away: ‘Burn it!’”

During one raid on Lenin, Faye recovered her camera and other photography equipment. She spent the next two years taking over one hundred photographs. Unable to access a darkroom or studio, Faye improvised, making negatives under blankets and printing “sun prints” from the negatives during the day. 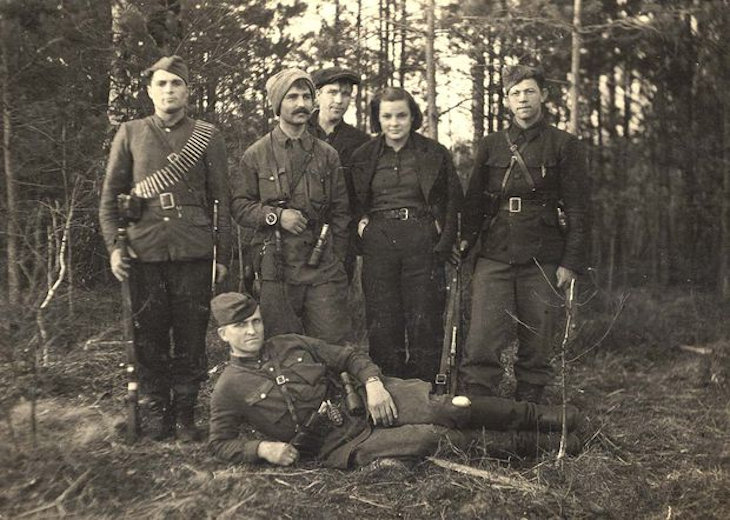 Ms. Schulman stands with partisans from the Molotov Brigade in Polesye, Poland, circa 1943-1944. Yad Vashem

Her photos offer a rare glimpse into life among partisan fighters. Although scores of Jews fought with the partisan brigade, Faye is the only known Jewish partisan photographer. “We faced hunger and cold; we faced the constant threat of death and torture; added to this we faced antisemitism in our own ranks. Against all odds we struggled,” Faye wrote in her autobiography, A Partisan’s Memoir, published in 1995.

Faye’s photographs are haunting, capturing Jews fighting back in the midst of the Holocaust. In one photo she captured the joy of three young Jewish men who met in the forest: each believed the others had been killed. Another photo shows a funeral of two Jewish fighters alongside two Russian fighters. Far from being passive victims, Faye wanted us to know that Jews fought back, battling the Nazis in any way they could, whether it was fighting with partisans or through silent, little known acts of rebellion, such as Faye’s resistance act of secretly taking photos of atrocities to show future generations. 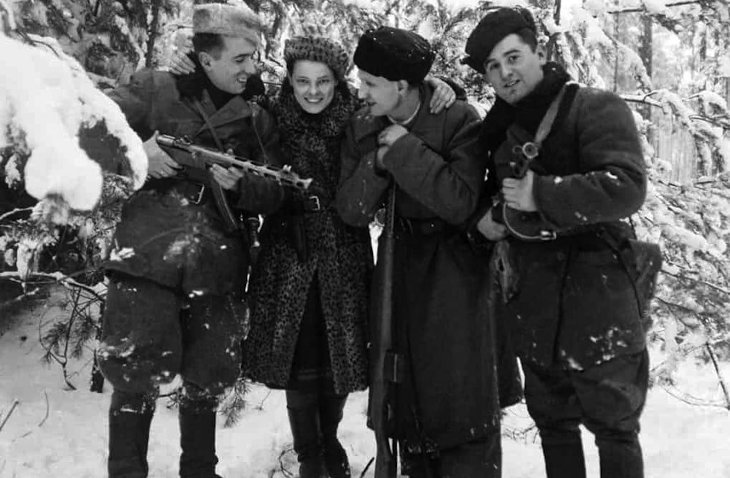 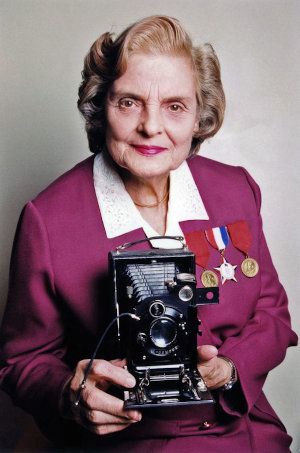 Faye stayed with the Molotova Partisans until the Soviet Union conquered the area, defeating the Nazis, in July of 1944. After the war, Faye found out that her two older brothers Moishe and Kopel had managed to escape from Nazi slave labor camps and had also joined partisans. They introduced Faye to another Jewish partisan they’d fought with, Morris Schulman, and he and Faye married soon after.

In 1948, Faye and Morris moved to Canada. “We were poor, and it was hard to find work because we did not speak English,” she wrote in her autobiography. “But we were young and healthy and determined.” The couple worked in a factory until they were eventually able to start a hardware store.

“I am now an old woman,” Faye later described. "I love my two children and my six grandchildren dearly. But my past life as a partisan, the Holocaust, the torture of our people: These I will never forget.”

Faye passed away at the age of 101 in May 2021. Her photographs continue to provide a testimony to the Holocaust and to the way that Jews fought back against their Nazi oppressors.

Yom HaShoah Global Day of Testimony
Lessons from the Book of Jonah
Where Are We? The Body, Brain, Soul Problem
Dr. Sheila Nazarian’s Escape from Iran
Comments
MOST POPULAR IN Current Issues
Our privacy policy
Aish.com Is Looking for Great Writers