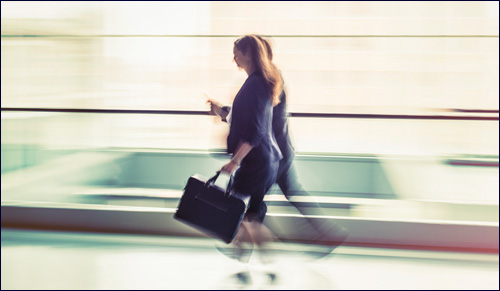 Running as fast as I could as the final call blared, I realized I had lost my handbag.

Nothing prepared me for the security line that greeted me at the airport after a recent lecture that I gave. I knew that I was in one of America’s busiest airports trying to return to New York, but I didn’t know that this was ‘cheerleader’s competition week’. Thousands of excited preteens and teens were also trying to get back home along with their parents and coaches. There was no room to move.

My flight was looming and the line was at a standstill. Nerves were at edge. Some began to push. Others to voice their frustration loudly. Tension filled the air. The situation began to get out of control.

A group decided to surge and create their own line. There was lots of jostling and pushing. Those whose flights were within the hour were called to join. That was me. I followed the crowd. There was no way I could miss this flight. I had family waiting and classes to teach. My eye was anxiously on the clock. It seemed as if everyone had excess baggage and the trays were spilling over with stuff. My heart was beating. Come on, come on, I thought. I wish the line would just move.

Finally it was my turn. Throwing my things into the tray, I quickly removed my shoes and raised my hands inside the security machine. My flight was being called. After being checked manually, I ran.

Where do I go? Which direction? It all seemed so confusing. The overhead screens were a jumble of numbers. I called out to an officer next to me. “You need to get on the train to get to your gate. You need to go downstairs to the station first!”

I could not believe it. How will I ever make this flight? My heart began to race. I ran down the stairs. The doors of the train were open. I jumped in. I didn’t even know if this was the right train. I searched the signs above. I turned to the person next to me. As I looked at her I gasped. She was holding her hand luggage and I was not! Oh no! I realized with a sinking feeling that I left my hand luggage upstairs at security. What was I thinking?

I jumped out of the train as the doors were about to close. Up the down staircase, flying up the steps. What is my bag?? Is it even still there? Did they cart it away as suspicious?

Retracing my steps, I spotted my bag in the distance. A sigh of relief as I grabbed it off the table. My flight was being called again. Final call. I couldn’t breathe.

I never ran so fast in my life. Back down the stairs, waiting for the train to take me to the area that leads to the gate I gave myself a talking to.

I had no one to blame but myself. A most lonely place to be.

The doors opened and once again I jumped into the train.

My inner voice began to nudge me further. There is no way you are going to make this flight! And why do you do this traveling to speak anyway? It’s too much pressure!

The train jolted to a stop. I dashed out.

My gate loomed up ahead. There were two people left to board. And me.

I made my way through the plane. With sweat pouring and in dire need of a cold cup of water, I found my seat.

As I made calmed down and took a few moments to collect my thoughts, I realized two things.

Misplacing a bag doesn’t mean you are a loser.

First, my inner voice was way too negative today. This is the powerful voice that becomes the reality we create. This is the voice that stops us in our tracks and does not allow us to believe in ourselves. We berate, we surrender, and we choose to limit ourselves. Instead of ‘yes’ we hear ‘no’. We replace ‘possible’ with ‘impossible’.

Why not replace that voice with positive language? Why not create a positive reality in our mind? Yes, it is tight, but if you try you will make it. It’s okay to misplace a bag. It’s not the end of the world and it doesn’t mean you are a loser.

Second, why do I choose to speak in different communities, sometimes getting up at the crack of dawn and returning the next morning as I watch the sun rise? Why do I feel the need to reach out to Jews all over the world despite the pressure that my schedule sometimes brings?

At that moment the image of my Zaydah, my grandfather, appeared in my mind. When I was a little girl, my Zaydah would offer a few words of Torah’s wisdom before my mother would speak. Though Zaydah’s English was broken, his was the language of the heart. Everyone understood his message.

I recalled how once Zaydah described Joseph wandering in the field. A man who was really an angel asked “What are you looking for?” Joseph replied “I am looking for my brothers.”

My Zaydah cried as he spoke. “This must be your mission. The mission of every Jew. Look for your brothers and sisters. And do not rest until you find them.”

I grew up knowing that this was my family’s mission in this world. This was our reality.

After surviving a physical holocaust, my parents and grandparents encountered a spiritual holocaust. Through love of every Jew, they discovered the key to our survival and passed this legacy on to us.

What an awesome reality we can create. Think positive. Reach out to your brethren with love. Change the world.

Path of the Soul #8: Strength of a Hero

5 Essential Ways to Make Room for Change and Move Forward
G-d Time
Shavuot is The Holiday of Cheesecake and Blintzes
What Does Kosher Mean Literally?
Comments
MOST POPULAR IN Personal Growth
Our privacy policy