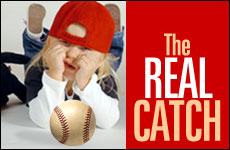 How would you react if your child did this to you?

There is a new American hero. His name is Steve Monforto.

Steve traveled from Laurel Springs, NJ to Citizens Bank Park in Philadelphia to watch a Phillies game with his wife and two children this past week. In the bottom of the 5th inning, Phillies batter Jayson Werth fouled a pitch back Steve's wife, Kathleen, sat to his right, holding their 15 month old daughter on her lap. Steve's three year old daughter, Emily, was to his left.

The foul ball made its way backwards towards the upper deck but fell just short of reaching the upper deck. The Monforto's were sitting in the front row of the upper deck and Steve reached far over the railing and caught the ball before it made its way down to the lower deck. It was a great catch and a special moment.

Steve had been going to Phillies games since he was three years old and had never caught a foul ball. You could see the thrill on his face. Fans throughout the stadium cheered for him. Nearby fans bumped fists and slapped five with him. He raised his arms high in victory. He turned to his left and gave his daughter Emily a high five. Then he even handed her the ball. A truly special moment.

Until Emily did the unthinkable.

She took the ball and threw it over the railing to the section below.

Anyone watching probably braced themselves for Steve to unleash his wrath on his daughter. After all, what was she thinking? How could she do that?

But what did Steve do?

He stared at her in disbelief for a brief second with a smile on his face. Emily, perhaps because of the crowd's shock with what she did, quickly realized that perhaps she did something wrong. Steve then cradled his daughter against his chest while smiling at his wife and continued to hold Emily and caress her hair, showing her incredible love. And the smile never left his face.

Click here to watch the video of Steve and Emily

Many fathers would have been fuming. His first foul ball ever? No ball to show his buddies at work? Perhaps the mother would have to step in to comfort the young girl while the father seethed, wanting nothing to do with his daughter.

And all of that would have been caught on television for the world to see. Had Steve reacted like many other fathers, he would be seen on television stations and web sites throughout the world as the father who lost his cool because of a baseball.

Instead, Steve is being looked up to as a hero. The Phillies are being bombarded with calls from both local and national media for more information regarding the story. The family is appearing on NBC's Today Show where they are being presented with a surprise gift. One moment of good parenting has turned into a national story of great parenting.

And how easily it could have gone the other way. Think of the shame, humiliation and disgrace that an angry father would have to absorb and confront on a national level.

The "cameras" are always on us.

This story has particular relevance during the High Holiday season. During this time of year we remind ourselves that the "cameras" are always on us. As King Solomon taught in three different places: "The ways of man are before God's eyes" (Proverbs 5:21), "God's eyes are in every place, keeping watch on the evil and the good" (Proverbs 15:3), and "God will judge every action." (Ecclesiastes 12:14)

During these days we talk about God's judgment of all our actions. While there may be no cameras or national audience, He sees everything and records all of our deeds.

Thus, our tradition teaches: "Consider three things and you will not come to sin. Know what is above you – a watchful Eye, an Ear that hears, and all of your actions are recorded in a book" (Ethics of our Fathers 2:1).

This is the time of year when we try to internalize this lesson and now we have the perfect story to motivate ourselves to do so. Steve Monforto wasn't performing for the cameras. He was simply being himself, a caring and loving dad. And now, because of the cameras, he will forever be remembered in that way.

Let's all remember that the Divine cameras are always rolling and at every moment of our lives we can choose to have that moment remembered perpetually for the bad or celebrated eternally for the good.

Talking to Your Kids About Rising Anti-Semitism

Should We Tell the Children?

Social Media: Tips for Safe and Meaningful Use

8 Nights, 8 Heroes
What Makes Eli Run?
The Tyranny of Materialism
Science Enters the Mysterious Inner World of Consciousness
Comments
MOST POPULAR IN Family
Our privacy policy