The Meaning of Chad Gadya 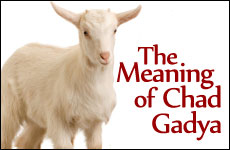 The Vilna Gaon’s explanation of the famous Passover song.

The Passover Haggada ends with the fun but peculiar song, Chad Gadya – An Only Kid.

This colorful song features a kid (a baby goat) purchased by “my father” for the price of two zuz, an ancient coin.

No sooner does he buy the kid, it is eaten by “the cat,” which is in turn bitten by “the dog,” which itself suffers being beaten by “the stick.” The stick doesn’t get off lightly for its beating; it is burnt by “the fire,” which is naturally doused by “the water.”

What happens to the water seems quite natural: it gets lapped up by “the ox,” which leads to the fatal slaughtering of the ox by “the butcher.” The butcher faces none other than the Angel of Death, and in case you thought that this dastardly fellow was invincible, he is ultimately vanquished at the conclusion of the song by the Holy One, Blessed be He.

The symbolic meaning of this sequence of people, animals and objects remained obscure until the Vilna Gaon presented the following interpretation.

Each verse alludes to one person or event in Jewish history:

The kid is the birthright mentioned in Genesis 25. This is the right to take the baton that had been passed from Abraham to Isaac, to continue Abraham’s mission to build a world full of loving kindness and monotheism and devoid of idolatry, child sacrifice and other evils.

My father is Jacob who bought the birthright from his twin brother Esau, who had been born first and thus had the natural right to the birthright.

The two zuzim are the bread and stew Jacob paid Esau for the birthright.

The cat represents the envy of Jacobs’s sons toward their brother Joseph’s, leading them to sell him into slavery in Egypt.

The dog is Egypt, where Joseph landed, and where eventually the entire clan of Jacob and the subsequent Israelite nation lived, were enslaved and were redeemed.

The stick is the famous staff of Moses, used to call forth various plagues and part the waters of the Sea for the Israelites to cross.

The fire represents the thirst for idolatry among Israelites that proved to be a persistent bane for over 800 years, from the year they left Egypt until the destruction of the First Temple in the Fifth Century BCE.

The ox is Rome (Esau’s descendent) who destroyed the 2nd Temple in 70 CE.

The butcher is the “Messiah Son of Joseph” (Mashiach Ben-Yoseph) who will restore full Jewish sovereignty in the Land of Israel.

The Angel of Death needs no introduction; in this song he represents the death of Messiah Ben-Yoseph

The Holy One of course also needs no introduction; here He arrives with Messiah Ben-David.

The repetition in each stanza underscores the ebb and flow of Jewish history – sometimes we’re down, but then we rise up. While most of the song looks backwards, it ends with an optimistic view toward the future, a fitting conclusion to the Seder.

Adapted from the Art of Amazement Haggada: Leader's Edition. This Haggada includes tips and tricks throughout the text, including questions and answers on various details of the Seder. You can buy it here or download a pdf version here.

Alexander Seinfeld is an ordained rabbi, a Stanford graduate and a former high school science teacher. He is the author of The Art of Amazement: Judaism's Forgotten Spirituality (JSL, 2010) and the founder of Jewish Spiritual Literacy, Inc. His weekly blog is at http://rabbiseinfeld.blogspot.com.

The Importance of Questions at the Seder
Chukat 5782: Let’s Play the Blame Game!
The Sin of Moses: The Two Ways to Communicate
In Aftermath of Chicago’s July 4th Shooting, Local Moms Provide Countless Points of Light
Comments
MOST POPULAR IN Passover
Our privacy policy