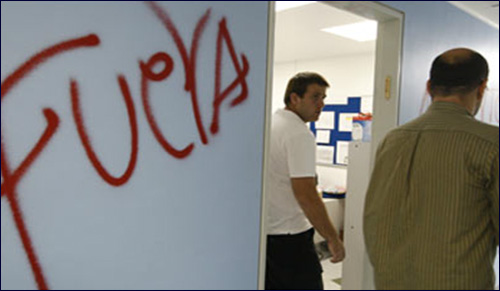 Surrounded by chaos and danger, over half of the Jewish community has left. Meet one Jew who is staying.

Hundreds of thousands of protestors have rocked the Venezuelan capital of Caracas over the past five weeks. Over 30 protestors have been killed. A pregnant woman was the latest casualty. In light of the recent chaos, Aish.com interviewed a member of the Jewish community of Caracas this week. He says that the story of Venezuelan turmoil is 15 years in the making. We are using a pseudonym to protect his identity.

“Today, I just found out a friend of mine, a Jew, was assassinated,” Daniel said to Aish.com. “He was trying to defend his property.”

Daniel does not believe the murder was an anti-Semitic attack; it is a relatively common occurrence in Venezuelan life today. Over the last 15 years, over half of the Jewish community has left Venezuela. About 20,000 Jews lived in Venezuela in 2000. There are now 8000 left.

When asked if he was worried, Daniel said, “As a Jew, only when I am on the way to the synagogue. As a citizen, I am very worried.” Daniel is a middle aged business man who used to travel abroad frequently. The devaluation of Venezuela’s Bolivar in the last year and the ubiquity of mass theft have made his business nearly impossible.

His college-aged son is now in the United States, but he and his wife remain in Venezuela to care for Daniel’s 87-year-old mother, who refuses to leave her home.

The current Jewish presence in Venezuela dates from at least the 17th century. It is also believed that some Sephardi Jews came to Venezuela after the inquisition in the beginning of the 16th century.

The country is home to the oldest Jewish cemetery in the Americas in the city of Coro. Some Jews fought in the forces of Simon Bolivar in the effort for independence from Spain.

Ashkenazi Jews arrived in the 20th century while fleeing the pogroms of Eastern Europe, and 250 Jews escaped the Nazis to Venezuela in 1939.

Hugo Chavez became president in 1998. Shortly thereafter, the exodus began. “We had a great country,” Daniel told Aish.com. He attributes crime and chaos as the reason for most Jews’ decision to leave. But Venezuela has had its fair share of anti-Semitic incidents.

Most notable is the vandalism in the synagogue of Caracas in 2009. On the Friday night of January 30 of that year, a group of vandals broke in to the synagogue. The community arrived Shabbat morning to find religious objects destroyed, siddurim defaced, and anti-Semitic slogans spray painted on the walls. 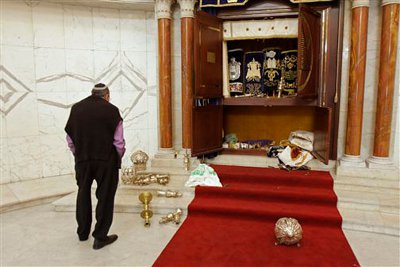 A man in front of the Aharon Hakodesh in the aftermath of the
attack on the synagogue. (From the San Francisco chronicle)

This attack made international headlines at the time. Daniel described another incident. “One day, about 300 people were standing outside the synagogue and four buses came up with pro-Palestinian signs. One of them was a government bus. It was olive green with the Metrobus logo and the sign for route 18. Along with the pro-Palestinian signs taped to the front of the bus was a Chavista slogan: ‘La revolución avanza – the revolution advances.’” The next day, the exterior walls of the synagogue were vandalized and scratched up. 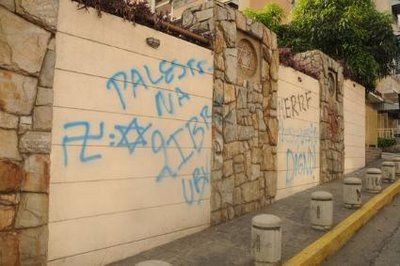 Graffiti outside of the Caracas synagogue after the 2009 attack

Daniel believes the government is ultimately responsible for these attacks. “It is in the government’s interest to instigate chaos, impunity, and disorder,” he explains. “They gain populist support in this way, and are able to divide various sectors of society against each other – industrial labor vs. farmers, business vs. labor, and ethnic groups against each other. I could give 1000 examples.”

Chavez was known to frequently sponsor mobs. His regime equipped mobs to intimidate people on elections days, to stage protests and to carry out vandalism. While Chavez personally condemned the 2009 attack, Daniel says most of the Jewish community believes it was government-backed as well.

“There are no murders against Jews, but propaganda yes,” Daniel said, explaining part of the reason he has tolerated the situation enough to remain in Venezuela. But the intimidation certainly comes close to violence. Moreover, Daniel asserts, “You and I know that anti-Zionism is anti-Semitism.”

Indeed, many of the Venezuelan Jews began to see the writing on the wall while observing Chavez’ policy toward Israel. Chavez made a number of famous anti-Israel remarks. He called Israel a “genocidal state,” claimed that the Mossad was trying to kill him, and accused Israel of supporting his opposition. The latter was a particularly passive-aggressive remark due to the fact that Chavez’s opponent in the last presidential election, Enrique Capriles, has Jewish ancestry.

He met multiple times with Mahmoud Ahmadinejad, the former Iranian president who routinely calls for Israel’s destruction, in Caracas and in Tehran. He went on to expel Israel’s ambassador from Venezuela in 2009. Direct flights from Damascus and Tehran now land in Caracas weekly, and some reports have indicated that passports are not checked on those flights.

After Chavez’s death in March of last year, his successor, Nicolas Maduro, cavalierly endorsed the “rights of the Palestinian people to its state” in his inauguration speech, an occasion that had nothing to do with foreign policy.

“Fidel Castro supposedly told Chavez that the Jews will leave by themselves. He believes we will leave due to fear of economic uncertainty,” Daniel said. “It would not surprise if he did in fact say this.”

Though Daniel insists there has not been violence directed at Jews for being Jews, the numbers show that Jews are worried.

There were four Jewish schools in Caracas. There is now only one, with the elementary and high schools housed together in the same building. While the community still exists, it is not the same community Daniel knew ten years ago. At times, he speaks of his community in the past tense, as if it were history.

“La Hebraica,” the name of the community center equivalent to the JCC, “was something unique. It was fuera de serie – in another league, extraordinary.” 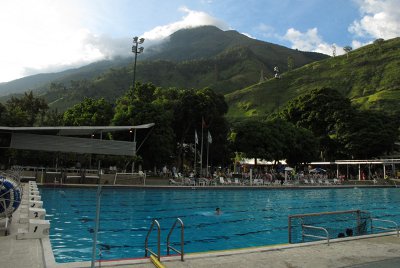 Hebraica Venezuela: The pool and stunning view of the Jewish community center in Caracas with the flag of Israel in the back ground.

The economy is in such shambles, that there are shortages of food and basic household products. They are now in the bizarre situation of living in the large, middle class house that they have owned for years, but being unable to stock their bathroom with toilet paper. Daniel’s son brings them basic household products from the U.S. “I asked my son to bring a suitcase full of toilet paper on his last visit home.”

Curiously, the new president of Venezuela claims to come from a lineage of conversos – Jews who converted to Christianity during the Spanish inquisition. Daniel believes it is true but irrelevant. The Jewish cemetery in Curacao contains the tomb of one Maduro-Capriles – a man who bore the last names of both the leader of the country and the leader of the opposition. “It obviously does not help the situation of Venezuelan Jewry,” Daniel says.

Hundreds of Venezuelan Jewish families are now living in Miami and in Israel. Daniel is unsure about his future, but right now it seems that they will not leave unless there are armed men on their doorstep. But he did not allow his son – the future of his family – to stay.

Throughout Jewish history, communities have come and – tragically – gone. The Jewish community of Venezuela seems to be inching closer to extinction. Anxious about the future, the one comfort Daniel does have is that “today, we have Israel.”

John Lennon, My Father and Me: Imagine and Jewish Universalism

SS Guard who Fell in Love with a Jew in Auschwitz
For Every Individual, A Torah Scroll
Allegiance To The Monarch
Meet the Real You: Yom Kippur
Comments
MOST POPULAR IN Israel
Our privacy policy
Aish.com Is Looking for Great Writers