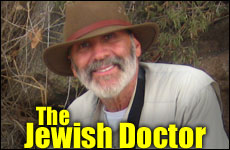 The small acts of kindness that a doctor witnessed 40 years ago changed his life and the lives of his patients.

Dr. Mark Paris is a leading HIV specialist who works in infectious disease clinics in Palm Beach, Florida. His official title is Senior Physician, but his real job is trying to bring light to some of the darkest areas that patients face in the scope of their illnesses. It’s a message that he learned 40 years ago as he witnessed the simple care and love dispensed by an Torah observant doctor.

“Patients know that I'm treating them the way I would treat anyone else. These are very sick people. All they want is someone to give them respect,” Mark said. “The whole way I deal with people is based on my religious attitude.”

Mark grew up in a non-religious Jewish household in Brighton Beach, New York. He attended PS 253, where almost the entire school was like him.

“I only had three or four non-Jewish kids in my class from kindergarten to fifth grade,” Mark said. “It was a very Jewish environment but I didn't know anyone religious.”

He attended college at Tulane University and then went to the University of Tennessee in Memphis for medical school. During Mark’s fourth year of medical school he worked in a local hospital. It was there that he met Manny.

Dr. Emmanuel Stadlin, better known among his patients and fellow physicians as Manny, was a pathologist in the hospital and a religious Jew. It was a time when segregation was still rampant in the Deep South, and many doctors had separate waiting rooms. Manny stood out not only because of the yarmulke on his head, but because of the incredible respect and warmth that he showed to every person, regardless of their color.

He didn't treat the cleaning lady any differently than his boss.

“He used to sit and drink tea with the black housekeeper. I noticed this guy treated everyone the same. He didn't treat the cleaning lady any differently than his boss. He told me it was because he was religious,” Mark said. “He told me, ‘Everyone was created in God’s image, so you have to treat everyone with respect.’”

Mark shadowed Manny in the hospital, not just to learn from his deep medical knowledge, but to study his conduct and his sincere concern for every person he met. The more time he spent with Manny, the more Mark saw that this was the kind of doctor that he wanted to become.

“He was very intellectual, a really smart guy,” Mark said. “He realized he could be a great professor and could still sit and drink tea with the black housekeeper.”

Mark and his wife spent the last three months of his medical school in Costa Rica where he completed a Tropical Medicine Fellowship. He then returned to Memphis for his medical internship and was able to work closely with Manny again.

The more time the two men spent together, the more Mark was able to recognize Manny’s Jewish roots as the source of his upright behavior. In the autopsy lab or over informal cups of tea, Manny began sharing some of the Jewish teachings that had influenced him. Manny introduced Mark to other Orthodox families in the local community, and Mark began reading all the Jewish books he could get his hands on. With the help of Manny, as well as a local rabbi and other people in the community, Mark and his family eventually became observant.

Since his early days in medical school, Mark has been on a charged mission to try to bring love and care to patients throughout the world.

In Florida, Mark now spends much of his time running clinics for people from third-world countries suffering from HIV, tuberculosis and sexually transmitted diseases. Many of his patients experience strong cultural stigmas associated with disease and medication, and suffer from depression and other challenges. Mark’s compassion helps them to cut through the gloom.

Patients and colleagues attest that Mark’s empathy is some of the best medicine he prescribes.

“The real concern that Mark has for other people is one of the hallmarks of his life and it really shows. Whatever he has learned, I wish they could bottle it and send it out. It’s really wonderful,” said Jeffrey Reynolds, a social worker who has worked with Mark for five years.

Mark’s wife Deborrah, a social worker, runs a nonprofit organization called Multinational Service Center which provides free or low-cost eye exams, glasses and social services for patients. Many of her patients are immigrants from Haiti and Latin America. Mark and Deborrah also now travel the world consulting on medical projects and treating patients in third-world countries, from the Amazon Rain Forest to deep in the heart of Africa. 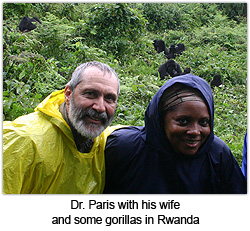 Among his experiences, Mark has spent time in Peru researching infectious causes of blindness and has helped identify quick, low-cost laboratory tests that can be best implemented in third-world counties. Mark says his most meaningful project was when the Global Medic Corps sent him and his wife to Lesotho in 2005 to be on the first African team of clinical mentors for the Clinton Foundation. Mark and Deborrah helped local medical practitioners to implement treatments in hospitals and clinics and they developed a curriculum for the Lesotho Ministry of Health.

Over the years Mark lost communication with Manny, but recently made contact with him again. The two men spoke over the phone and are trying to arrange an in-person reunion. Despite some health problems Manny still shows the same sincere concern for others and a love of learning as he continues to attend a busy schedule of Jewish classes. His energy continues to inspire Mark.

“What I've learned from Judaism is that everyone in the world has something they can teach me," Mark said. "You don't meet someone unless there's a reason to do so. God puts you in a situation so you can learn something."

Manny and Mark clearly had a reason to meet each other 40 years ago in a hospital in Memphis. Little did Manny know just how far his kindness would spread.

The Jewish Ethicist: Can I Quit?

The Jewish Ethicist - A Free Ride?
The Connection between Israel and the Jewish People
Grit and Torah
Why We Can’t See True Reality
Comments
MOST POPULAR IN Current Issues
Our privacy policy