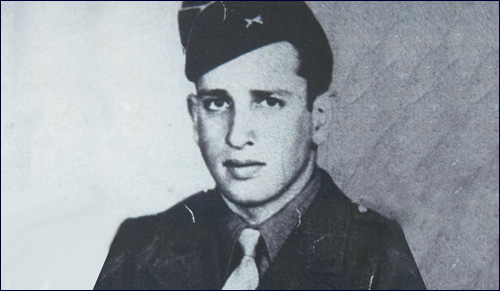 Robert Levine was captured by the Nazis. As his life hung in balance, his dog tags revealed that he was Jewish.

Approximately 500,000 Jews served in the U.S. armed forces during World War II. Jewish G.I.s constantly faced the specter of anti-Semitism in the army and they were forced to consider how open they should be about their religion. They had deep emotions about facing an enemy who was methodically capturing and murdering Jews. Jewish G.I.s feared the consequences if caught by the Nazis. Their last name, physical appearance, or the “H” (for Hebrew) on their dog tags could mean being shipped to a concentration camp.

Robert Levine, aged 19, from Bronx, NY, was one of the young Jewish American soldiers who landed in England prior to the Allies’ D-Day invasion on June 6, 1944. Together with his crew he arrived on the French coast behind the 90th Infantry.

Levine's first assignment, after stepping off the boat at Utah Beach, was to carry 81mm mortar shells forward to positions shelling the Germans to force a retreat from Hill 122, a German defensive position near the landing zone.

After a fierce battle, the Americans succeeded in forcing the Germans off the hill, but getting back down the other side was a problem.

“The Germans retreated, but they set up traps,” explained Levine. “We got caught at the bottom of the hill, where the Germans were waiting for us. Suddenly a grenade came over and caught me in my leg, above the knee. And I looked up and I saw this German paratrooper. He looked about 10 feet tall, and pointed his submachine gun at me. The kid next to me got up and took off, and the German wheeled around and shot him. I put up my hands and surrendered."

Levine found himself a Nazi prisoner of war. 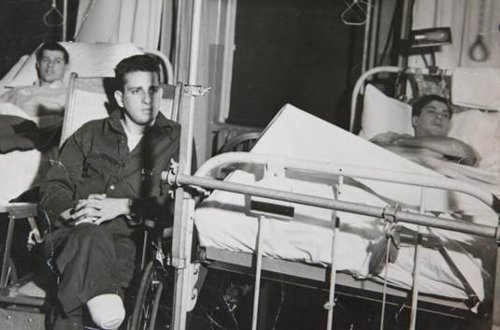 Marching with a dozen other American prisoners under the control of German forces, they raised clouds of dust, a target for incoming mortar shells from the American 90th Infantry Division. Ironically these were the same type of shells Levine had carried from Utah Beach. Suddenly one of these ‘friendly fire’ shells exploded. The soldier beside Levine, who absorbed most of the blast’s deadly force, died instantly.

"A guy named Mike and me – we both went flying. My leg was really damaged, and Mike was killed. To this day, I believe he took the bullet for me, he died so I could live," Levine maintains. Of the dozen American POWs captured that day, he was the only survivor.

With his leg injured far more seriously this time, Levine’s chances of survival appeared precarious at best. His salvation was to come in the unlikely guise of a dark-haired German doctor named Dr. Edgar Woll.

Levine recalled finding himself on the ‘operating table’ in a German field hospital – the kitchen table in a French farmhouse. The military doctor looked at him and told him in accented English, "For you, the war is over." Then the doctor noticed his dog tags and asked in German, "What is 'H'?"

The H for 'Hebrew' identified me as Jewish. I had just turned 19 and I thought that was the end.

At that time all GIs wore stamped metal tags on chains around their necks, containing identifying information including their religion: C for Catholic, P for Protestant or H for Hebrew.

"I knew the H for 'Hebrew' identified me as Jewish," Levine said. "I had just turned 19, and I thought that was the end for me. I said to myself – and I can still hear myself saying it – ‘There goes my 20th birthday.’ I really did not think I would make it.”

Levine was probably too petrified to say anything at that point. He thought his life was over. The doctor must have suspected what the H stood for.

Yet on that summer day in July, 1944, Levine awoke from the operation. He discovered that although his leg was gone, he was still alive. Emerging from the anesthesia, his relief at being alive was greater than the loss of his lower right leg.

Dr. Woll’s surgery saved the Jewish soldier’s life. The compassionate doctor also removed Levine’s incriminating dog tags, insuring his Nazi captors would not kill the young GI because he was a Jew.

“He took the dog tags knowing full well that I would have got in trouble somewhere down the line,” recounted Levine. “I believe he saved me.”

Robert Levine (L) as a young soldier, Dr. Edgar Woll (R) as a young doctor. In the center is the handwritten note explaining the treatment done by Dr. Woll.

Inside his shirt pocket he found a note written by Dr. Woll in German on the reverse side of a Nazi propaganda card with quotations from Adolf Hitler. Though Levine could not read a word of German, he kept the card for months. Then he was rescued by Allied troops and a ship took him home to the United States. When Levine had the note translated, he discovered why the doctor had chosen amputation, including details of the post-surgical treatment: “Crushed right foot. Fracture of lower leg. Foreign body in upper right leg’s tissue. Opening of the ankle joint. Amputation at place of fracture. Bandage with sulfa. Vaccinated against gas gangrene.”

The removal of his dog tags likely saved Levine from being sent to an infamous camp for Jewish POWs where 350 American soldiers were worked to death.

The removal of his dog tags likely saved Levine from being sent to an infamous camp for Jewish POWs where 350 American soldiers were worked to death. Levine’s wife Edith believes her husband would have died if not for Dr. Woll’s exceptional act of kindness towards an injured enemy soldier.

Upon his return home, Levine became a businessman and owned several fast-food restaurants. He led a full life as a husband, father and grandfather. Yet he could not forget the sympathetic German doctor who had inexplicably saved his life, though he never had the chance to thank him or see him again. 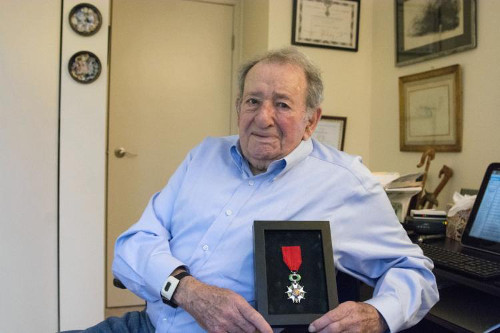 Bob Levine, aged 91, at his home in Teaneck, N.J. with his collection of military medals, including the Purple Heart, the Bronze Star and France’s Legion of Honor insignia awarded to Allied veterans who served in France during World War II.

It took Robert Levin nearly 40 years to track down Doctor Woll but the mystery started to unravel during an emotional visit back to Normandy Beach in 1981. There, through a network of connections implemented by the curator of the Utah Beach Museum, Levine was able to meet Dr. Woll’s family in Saarbrucken, Germany.

Although Dr. Woll had died of cancer in 1954, his widow and their three children were deeply moved that the veteran, after all these years, was willing to travel to Germany to acknowledge the doctor's humane treatment.

“The family wanted to meet this American Jewish soldier. It was an amazing connection,” said Levine.

Bob and Edith Levine, who have two daughters of their own, spent the weekend with the doctor’s family. They presented Mrs. Woll with her late husband’s old handwritten note.

There was a Saturday night party, with a few drinks and a few toasts. One of the German guests raised a glass and turned to Levine. “Bob,” he declared, “without you, we’d all be saying Heil Hitler. You lost your leg, others lost their lives, but now we can say what we think."

The Levines returned the hospitality. When the Wolls’ granddaughter attended Fairleigh Dickinson University, she stayed at the home of the New Jersey couple.

A second Woll granddaughter was a frequent dinner guest while her husband studied for a law degree at NYU.

The Levines received a family portrait from the Wolls when the doctor’s wife turned 100. The Woll great-granddaughters went home with souvenir T-shirts after a recent U.S. visit.

“They became our extended family,” Levine said. “It’s special. How many guys came out of the war with this kind of connection?”

At a time of unspeakable brutality, the life of one young Jewish soldier had been saved by one Nazi doctor with a compassionate heart.

My Mother's Trauma of the Kindertransport
It Takes A Lot Of Faith To Be An Atheist
How Instagram Brought Back This Nostalgic Soup
What Makes Eli Run?
Comments
MOST POPULAR IN Israel
Our privacy policy