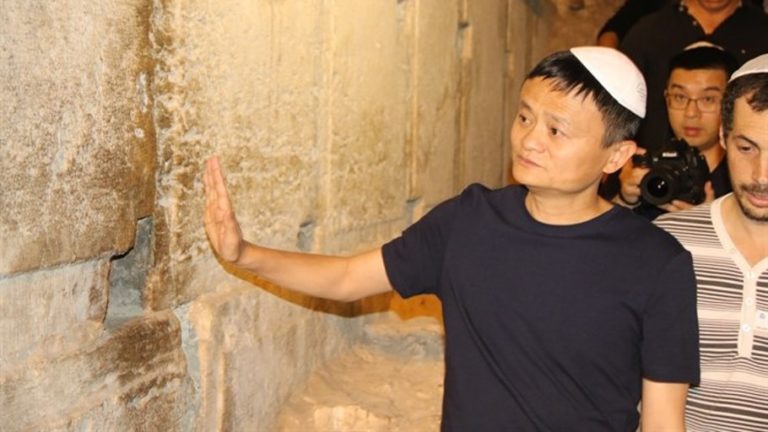 Israel's global status got another uptick this week when Jack Ma, CEO of Alibaba – the Chinese version of Amazon.com – spent three days in Israel, praising it repeatedly as "inspirational" and full of "creativity, wisdom, persistence and vision."

Alibaba is a global giant with 66,000 employees, a market cap of half a trillion dollars, and holder of the largest IPO in financial history. Ma, whose personal wealth is $42 billion, was ranked as the world's "second greatest leader" by Fortune magazine.

This week, Ma compared the State of Israel with Alibaba: both have excelled despite countless obstacles and setbacks.

"There were thousands of times I said to myself and to colleagues at Alibaba: Never give up," says Ma. In Israel, "people are born to believe ‘never give up.’ This is what has made Israel a miracle in only 70 years."

"Rather than read about Israel, you should come here, feel it, and touch it."

In his first visit to Israel, Ma brought along 40 senior Alibaba's managers – a visit closely watched on the global business stage. So the BDS movement could not have been pleased as Ma glowed how Israel "is so peaceful and prosperous... Rather than read about Israel, you should come here, feel it, and touch it."

As part of a $15 billion global expansion, Alibaba is now opening a R&D center in Tel Aviv – focusing on artificial intelligence, computer vision, and other disruptive technologies.

Ma praised the Jewish trait of "chutzpah – the courage to challenge convention," and expressed amazement that in Israel

Beyond the business side of the trip, Ma focused on Jewish heritage and the Jewish people's return to its homeland. Ma visited the Israel Museum, and at the Western Wall echoed core Jewish values: "Teach history, preserve the tradition, and honor what our forefathers did."

Ma's visit to Israel was personal in another important way. Having failed his college entrance exams four times, Ma was genuinely thrilled to receive an honorary doctorate from Tel Aviv University. Watch his remarkable speech:

Out of the Mouth of Roni

Netanel Felber's Message: Don't Give Up
Is Grease the Word?
Dried Fruit Compote
Scientific Curiosity and the Divine Encounter
Comments
MOST POPULAR IN Israel
Our privacy policy
Aish.com Is Looking for Great Writers