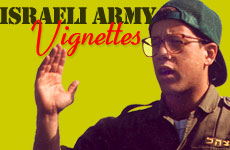 Ahh the joys of army service: figuring out the difference between the dress and work uniform ... keeping your fingers out of the gun barrel ... fasting in the desert heat ...

When I got my induction notice three months after making Aliyah, I was already married with three small children. The Army has a special program for older inductees called "Shlav Bet" (Stage Two), where you do a crash course in basic training and go directly into reserve duty.

My Shlav Bet unit was comprised mostly of new immigrants from the former Soviet Union, plus a smattering of older religious recruits from Western countries. Being idealistic, I felt I should try to do something more "meaningful" as a reservist, so I volunteered to serve in a combat infantry unit.

The reserve unit to which I was assigned had been together since the Yom Kippur War in 1973. The unit is responsible to patrol the southern borders of Israel -- either along the Sinai (Egypt), Jordan, or Gaza. I've been with this unit for nine years now.

One Yom Kippur I was doing reserve duty on the Jordanian Border south of the Dead Sea. Our job was to patrol the border in command cars mounted with machine guns. Together with our Bedouin tracker we would do eight-hour shifts, driving along patrol roads looking for infiltrators and smugglers.

Yom Kippur, besides being one of the holiest days of the year, is also a long and difficult fast -- especially if you're hanging out by the Dead Sea where the temperature is above 100 degrees, with the sun beating down on you, no shade, and you can't eat or drink for 25 hours!

As the fast ended, one of the younger guys in my unit -- a secular Jew from Tel Aviv, complete with Mohawk haircut and many body piercings -- came over and proudly announced with a big smile on his face that he'd been on patrol the entire day and had not eaten or drunk anything.

This was the last guy I expected to fast, yet he did so under the most difficult of conditions.

It's times like this that make living in Israel so fascinating and meaningful.

WITH MY OWN EYES
by Stuart Schrader

I came to Israel in 1990 with no job and no place to live, just with my backpack and my relatives' phone numbers. I was still young enough to be an idealist, so I was really looking forward to being part of a Jewish army, something that hadn't existed for almost 2,000 years.

I was born a few months after the Six Day War, and I was 10 years old during the raid on Entebbe (I saw "Operation Thunderbolt" about 100 times) -- so I grew up with all the mythology of the I.D.F. as an expression of my ideals. All the Jews in the world have a place that is theirs, and an army defending that place.

My first day in the army was really quite uninspiring and boring. Boring, that is, except for the many pokes and prods you receive all over your body, followed by the pictures taken of your teeth and face, and the next-of-kin information that you are asked to provide. (Soldiers are generally still young enough not to pay attention to the significance of these things).

After being processed, I received my uniform. Let there be no illusions -- the Israeli army is a good fighting force, but sartorial splendor is not its forte. The only difference between the "A-dress" uniform and the "B-work" uniform is that the B's are heavier and a slightly different shade of green. No matter what you do you still look like a schlump.

I also received a "kitbag" containing two pairs of boots, three uniforms, a belt, a winter coat (it was the middle of July in Israel), and a glow-in-the-dark strip with velcro-fasteners at the end. Rumor has it that this thing actually has some use. Female soldiers, when travelling home at night, are required to attach it to their bag to help them be seen. (Never mind that neither I, nor any of the other 22 new recruits in the room, were female soldiers.)

Most of us in that room were new immigrants, Jews from all over the world. We were raw recruits, all looking alike, equally uncomfortable in their new outfits. The sergeant in charge started telling us what to do with everything in our kit.

"Do your belt like this ... sleeves, if rolled up, put over the elbow..." Then he got to this silly, glow-in-the-dark strip, and told us how to attach it to our belt loops. Someone in the back, whose Hebrew was not yet perfect, asked for a translation. It was given. Then someone else asked, and we got rolling. The cynical, get-me-out-of-here sergeant got into the act, too. By the end, he explained how to do this totally banal act in 14 languages!

I was blown away. Here I was witnessing the "ingathering of the exiles" with my own eyes! I once heard that in Israel there are over 100 languages and dialects spoken (of course, with Hebrew as the great unifier). But here were Jews from all over the world, gathering in a little room, going into the Jewish Army, to defend the Jewish State together. Cool.

It has been nearly nine years since that day, and I take that memory with me wherever I go. Twenty-two people. Fourteen languages. One place. Israel.

At age 35 I was off to boot camp. For three weeks we learned army law and lore. We learned how to disassemble and assemble the M-16, Uzi and Galil rifles. They didn't make us do too much exercise since we were all post-35 and they didn't want anyone dropping dead.

We were not what you'd call a "crack army unit."

I fought at the beginning of the Intifada.

My unit was involved in Spring training when we were called up on an emergency order for indefinite service. We patrolled the streets of Hebron for 18 hours until relieved.

Now I live in Miami, and...my son is serving in the Israeli army!

Still Crazy: Why We Made Aliyah
Baked Burik Recipe
Blocked Goals and Anger
Why the Mezuzah is Placed on a Slant
Comments
MOST POPULAR IN Israel
Our privacy policy