Tahina: History, Facts and Recipes for the Versatile Israeli Food 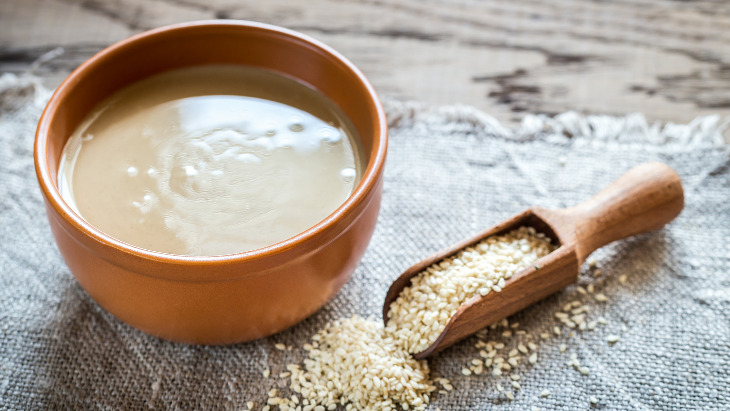 Discover why tahina is one of Israel’s most popular foods.

Creamy, nutty tahina is one of the most popular condiments in Israel. It's drizzled on falafel and salad, made into dips and spreads, and is one of the key ingredients in hummus. Here are some little-known facts about this tasty Israeli food, and yummy recipes below.

High in Vitamins and Minerals

Tahina paste is made out of ground, toasted sesame seeds. The best sesame seeds are said to come from Ethiopia, and each year tiny Israel is the second largest buyer of Ethiopian sesame seeds, second only to China.

The sesame seeds are hulled, then roasted. Tahina makers crush the seeds through machines that look like the ancient millstones that have been found in archeological sites throughout Israel, grinding the seeds slowly until they yield a creamy, buttery-like paste. 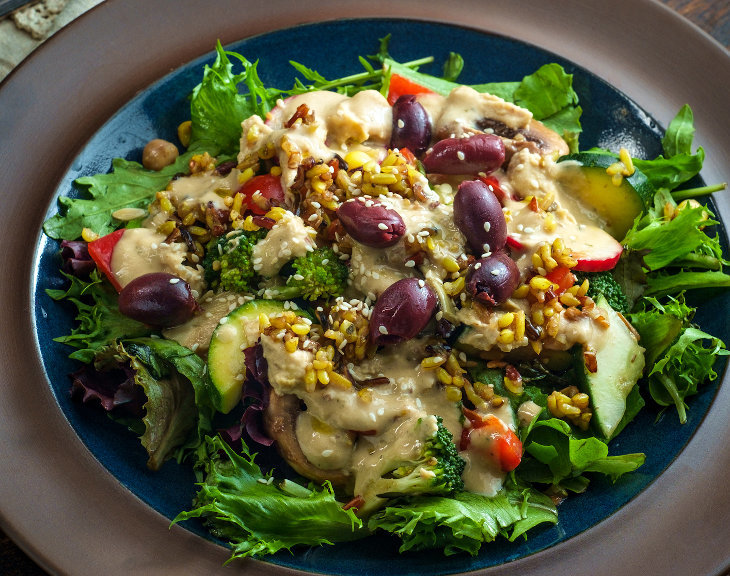 A common sight in an Israeli shuk (outdoor market) is a large vat of sesame seeds being freshly ground, yielding rich honey-colored tahina paste. This paste is mixed with lemon juice, water, and a host of other ingredients to create delicious tahina sauces, which Israelis eat with everything. Some adventurous cooks even incorporate tahina into baked goods, ice cream, and drinks.

Tahina is high in essential vitamins and minerals. Just one tablespoon provides over 10% of the recommended daily amount of thiamine, vitamin B6, phosphorous and manganese, which are important to bone health. Tahina is high in calcium and antioxidants, reduces inflammation, and has even been shown to reduce the symptoms of osteoarthritis.

Sesame seeds have been grown and processed for thousands of years. It was eaten in India 5,000 years ago, and its popularity spread to China and the Middle East. Cuneiform tablets found in the area of modern-day Israel talk about eating sesame as far back as the 3rd century BCE, and sesame was a popular food in ancient Greece and Rome.

The 5th century Roman historian Herodotus observed that sesame oil was the only form of oil used in Babylonia. The Talmud reflects the ubiquitous use of sesame, noting it’s permissible to use sesame oil in kindling Shabbat lights on Friday evenings (Mishna Shabbat 2:5). 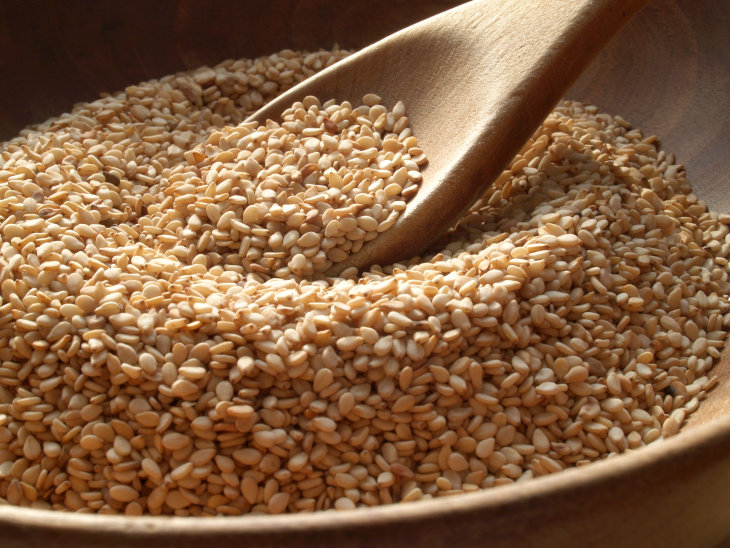 Food historian Gil Marks noted that tahina was likely first made as a byproduct of sesame oil production – and that it became a popular food in its own right during the Middle Ages. (Discussed in Encyclopedia of Jewish Food by Gil Marks: 2010.)

The word tahina comes from the Arabic word tahn, meaning something that’s ground up. In Hebrew, the word for grind has the same root. Most people in the English speaking world use the Greek spelling “tahina”. In Israel, this delicious food is pronounced tahina.

Israelis consume a whopping 50,000 tons of sesame seeds every year – much of it in tahina. (That’s eleven pounds per person – and nearly four times the amount of peanut butter the average American eats in a year.)

One of the most traditional Jewish uses of tahina is in halva, a sweet, crumbly candy that’s become a staple of Jewish cuisine.

The word halva can be found in many cultures, including Indian, Arabic and Turkish cuisines. Derived from the Arabic word for sweet, hilwa, halva can refer to many different types of candy. In the Jewish world, however, halva almost always signifies a tehina-infused sweet. 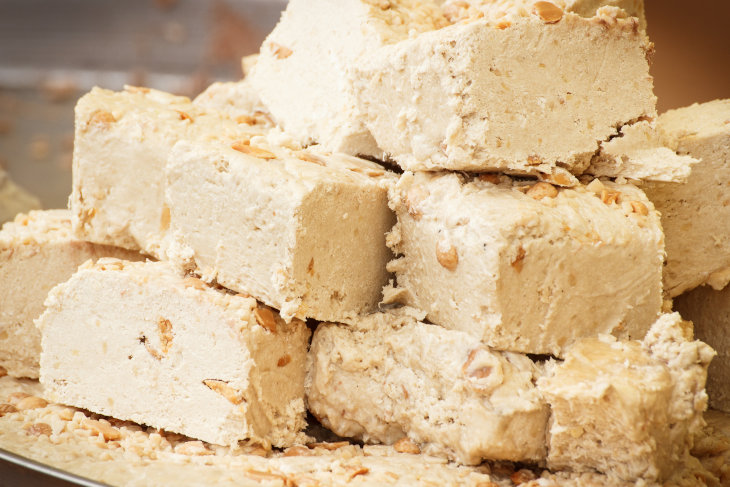 That dates back to the Renaissance when Ottoman Turkish chefs were busy inventing dozens of delectable new types of halva. The royal Topkapi Palace in Istanbul even had a separate kitchen devoted solely to sweets, called the Helvahane, or House of Halva. Royal Ottoman chefs experimented with a wide range of candy ingredients, including sesame seeds, and they called the resulting sweet sesame-based dish tahin helvasi.

Jewish Halva was introduced to the United States in 1907, when Nathan Radutzky, a Jewish immigrant from Kiev moved to New York. A penniless immigrant, Nathan had one key skill: he could make delicious halva candy. He began selling his halva from a pushcart on the Lower East Side of Manhattan. By the late 1920s, he’d saved up enough funds to build a factory in Brooklyn, where he produced halva candies in various flavors and shapes.

Nathan and his wife Rae had four boys, all of whom joined the family business. Originally called Independent Halvah & Candies, the company changed its name in the 1950s to Joyva, a combination of Nathan’s granddaughter's name – Joy – with halva. In addition to halva, Joyva also made tahina for the burgeoning Jewish consumer market. Joyva continues to produce tahina, halva and other products today. Each month, they use 350 tons of sesame seeds to create their delectable treats.

In recent years tahina has gone gourmet. Israel-based cookbook writer Adina Sussman has explained that when making tahina, she looks for high quality sesame seeds which impart a distinctive taste to the resulting paste. “The Humera seeds (a type of sesame seed grown in Ethiopia) specifically are prized for the soil in which they’re grown, so I think there is some value in the terroir. The soil is very rich in certain minerals and grows other things that imbue the seeds with deep flavor.”

Sussman explains that the ideal tahina “should have a light and toasty sesame seed flavor, and it should definitely have a bit of a richness to it.”

“If there is one ingredient you absolutely need in order to cook like an Israeli,” explains Israeli cookbook writers Einat Admony and Janna Gur, “tahina is it…. We drizzle tahina on roasted vegetables, transform it into delicious crusts for roasted meats and fish, and even use it in desserts and pastries.” (Quoted in Shuk: From Market to Table, the Heart of Israeli Home Cooking by Einat Admony & Jann Gur: 2019.)

Tahina started to catch on outside the Jewish state as a new generation of Israeli superstar chefs have demonstrated tahina’s versatile uses. Celebrity Israeli chef Yotam Ottolenghi, who is based in Britain, named it as one of the top ten ingredients he can’t do without. “Rare is the dish not improved with a drizzle of tahina sauce, made from simply mixing raw tahina with some lemon juice, water, garlic and salt. Grilled meats and fish, roasted root vegetables, a chopped fresh tomato and cucumber salad: All are enriched over it,” he’s said.

Celebrity chef Michael Solomonov included an entire chapter on tahina, which he calls “The Secret Sauce”, in his bestselling Israeli cookbook Zahav: A World or Israeli Cooking (2015). “Israelis love tahina like Americans love Doritos and wrestling – unconditionally and a little bit irrationally. The country doesn’t run without it,” he notes, and he’s created a plethora of recipes that use this beloved staple, including cookies, ice cream, salad dressings and dips. 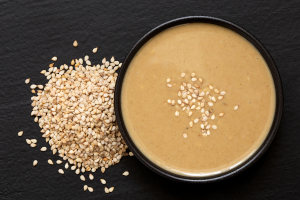 This basic sauce is a popular addition to Israeli salads, vegetable dishes, and meats. It also makes a great dip for pita bread or crudites.

Whisk together tahina, ¼ cup of lemon juice, and salt in a small bowl until thickened. Add water, 1 T at a time, whisking constantly until creamy (should be no more than 4 T). Taste and add up to 2 T more lemon juice, if needed.

Store in the refrigerator for up to five days; the sauce will thicken with the cold, so bring it to room temperature just before serving.

Cauliflower with Tahina and Pomegranate 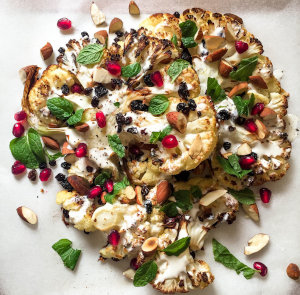 “Visit Israel these days and you’ll find tahina in every single dish on the restaurant,” notes cookbook writers Leah Schapira, Victoria Dwek, Renee Muller, Esti Waldman and Shaindy Menzer, the team behind Dinner Done Between Carpools: Practical Recipes for Your Busy Day (2020). This recipe brings the taste of Israeli cooking into any home kitchen. 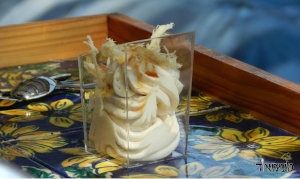 From Millennial Kosher: Recipes Reinvented for the Modern Palate by Chanie Apfelbaum, Creator of Busy in Brooklyn (a popular cooking blog): 2018.

Jewish Foods from Ukraine
What Makes Eli Run?
The Tyranny of Materialism
Science Enters the Mysterious Inner World of Consciousness
Comments
MOST POPULAR IN Family
Our privacy policy