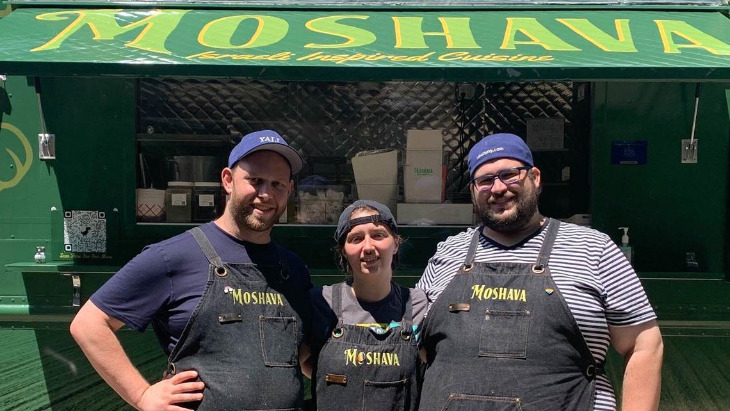 When an Israeli food truck was disinvited to a food festival, supporters stepped in to protest.

When a Philadelphia food festival recently disinvited an Israeli food truck, Jews and allies around the world made their voices heard, decrying antisemitism and ultimately leading to an apology and the cancellation of the festival.

One emerging chef on the Philadelphia food scene is Israeli-born Nir Sheynfeld, who debuted his new Israeli themed food truck Moshava at the May festival. In a recent Aish.com exclusive interview, Nir explained that the Israeli street food he served proved popular with festival-goers.

“I grew up in Even Yehuda, a small moshava (farm) outside of Netanya” in the north of Israel, Nir explained – “hence the name of the food truck”. Nir grew up eating popular Israeli dishes such as falafel, shawarma and sabich – a delicious pita sandwich of fried eggplant, hard boiled eggs and salads. Nir moved to the United States in 2015 to attend culinary school, and opened Moshava along with two partners as a way to showcase the scrumptious Israeli foods he loves.

At the May event, Nir’s food proved popular. “We thought it was great. A lot of people showed up to support us” at the food truck’s grand opening. “We got good feedback on the food and everything,” he recalls.

While Nir was dishing up Israeli cuisine, however, the two local organizations behind the food festival – Sunflower Philly and Eat Up the Borders – were getting intense hate-filled criticism for allowing an Israeli food vendor to take part. “We received more hate than I thought was possible for having an Israeli vendor,” a representative of Eat Up the Borders posted on social media. 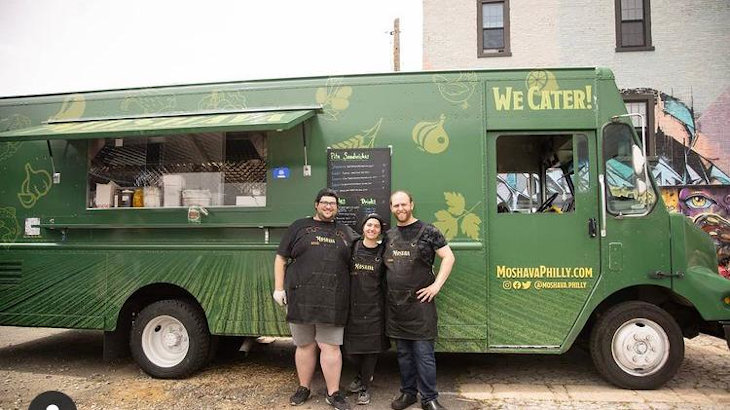 Vitriolic anti-Israel protestors turned what was meant to be a fun food festival into a highly politicized vehicle for hate. As an attempt to appease their critics, Sunflower Philly and Eat Up the Borders announced that for their next food festival, in June 2020, they would invite a Palestinian food vendor and continue to include Nir’s food truck.

But days before the June food festival was to go ahead, the Palestinian food vendor was forced to pull out due to scheduling conflicts. Eat Up the Borders abruptly informed Nir that he was barred from selling food at the festival.

This assumption that Israel – alone, out of the global family of nations – somehow merits special attention and criticism has gained traction in recent years, with horrific results. By treating Israel as a pariah state and exposing it to constant defamation and distortion, Israel’s enemies have succeeded in many quarters in making people believe that Israel alone is some sort of monstrous, illegitimate country without equal in the world. Activists who criticize Israel single it out for scrutiny and hatred in a way that they would never apply to any other state, no matter how terrible the conditions there might be.

While many critics of Israel claim that they are not antisemitic and are merely motivated to speak out by politics within Israel, detractors of the Jewish state don’t apply this standard to any other nation. The BDS (boycott, divestment and sanction) movement aims to remove Israel from the parameters of acceptable discourse, rendering Israel an unwanted outsider without friend, supporters or allies. This echoes age-old antisemitic slurs that Jews are somehow an evil or accursed race with no role to play in wider society.

Natan Sharansky, the acclaimed Israeli politician who languished for years in a Soviet prison for the “crime” of wanting to leave Russia and move to Israel, has called this intense demonization of Israel the “new antisemitism”. “Whereas classical antisemitism is aimed at the Jewish people or the Jewish religion,” Sharansky notes, “‘new antisemitism’ is aimed at the Jewish state. Since this anti-Semitism can hide behind a veneer of legitimate criticism of israel, it is more difficult to expose. Making the task even harder is that this hatred is advanced in the name of values most of us would consider unimpeachable, such as human rights.”

Sharansky came up with the “3D” Test to help determine whether criticism of Israel is legitimate or motivated by anti-Semitism:

Demonization: Are Israel’s actions being distorted? Are critics discussing Israeli actions in a deliberate way? Or are they making wild, harmful claims such as Israel is acting like Nazi Germany or Israel is nefariously interfering in politics in other countries. “This is anti-Semitism, not legitimate criticism of Israel,” Sharansky notes.

Double Standards: Is Israel alone being criticized for human rights abuses while other nations – many with terrible human rights records – are left out of anti-Israel activists’ concerns? By obsessively focusing on the sole Jewish state, Israel’s detractors are tapping into anti-Jewish tropes that Jews are somehow ly evil or bad.

Delegitimization: “When Israel’s fundamental right to exist is denied – alone among all the peoples in the world – this too is antisemitism,” Sharansky notes. The decision to exclude Nir from the food festival includes all three of these conditions, painting Nir and his food truck and all of Israel as somehow too tainted and bad to take part in a fun weekend event.

When news got out that Eat Up the Borders and Sunflower Philly had banned Nir from the June food festival, engaged citizens around the world flooded their social media accounts with comments. While some of these comments were intensely hateful and slandered the Jewish state, many more expressed outrage that an individual Israeli living in Philadelphia was being boycotted in this way.

When faced with anti-Jewish hatred, don’t be afraid or be silent.

Days before the June festival, Eat Up the Borders issued an apology. “We now see that excluding any particular vendor in the name of trying to protect them (from potentially violent protestors) was the wrong decision. We did what we thought was best in the moment, but we failed….” Notably, however, the festival organizers did not invite Moshava back to the festival, though they did offer to pay them a portion of the profits.

Nir and the festival organizers continued to hear from outraged patrons, calling the ongoing decision to ban Nir’s food truck unconscionable. Finally, soon before the festival was meant to take place, Eat up the Borders and Sunflower Philly announced they were cancelling June’s Taste of Home.

“All the support that we got is amazing and extremely overwhelming,” Nir notes. “We’re grateful for everyone who contacted us – we feel their love.”

In the days since he was disinvited to the food festival, Nir’s food truck has continued to be popular with customers. He wants us to take away a key lesson. “Don’t be afraid or be silent when faced with anti-Jewish hatred. All being silent does is empower people to push those racist and antisemitic agendas.”