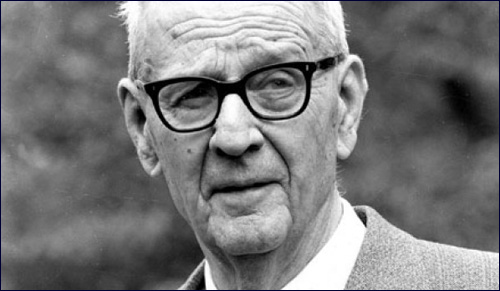 Posing as a Spanish ambassador in Hungary, Giorgio Perlasca risked his life to save 5218 Jews from deportation to Nazi death camps.

Giorgio Perlasca saved more Jews than the 1200 saved by the famous Oskar Schindler. Like Raoul Wallenberg, Perlasca boldly rescued Hungarian Jews from under the noses of the Nazis.

Born in 1910 in the small northern Italian town of Como and raised in nearby Padua, Perlasca’s family consisted of civil servants and army officers. Initially attracted to Italian fascism, he volunteered for the army when Italy invaded Ethiopia in 1935. Later he joined the Corps of Volunteer Troops, an Italian force assisting the rebel forces of Francisco Franco in the Spanish Civil from 1936 to 1939. In gratitude for his service, Perlasca received a letter of thanks from Franco’s victorious new government. 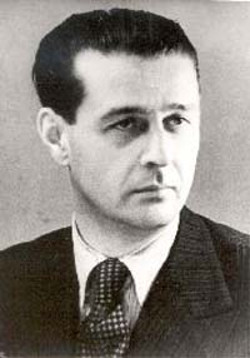 The letter instructed the Spanish foreign service to come to his aid if he should ever need diplomatic assistance. At the time Perlasca had no idea how important this letter would turn out to be. Upon his return home to Italy, he found Mussolini had aligned with Hitler’s Third Reich and introduced its racial laws in 1938. Perlesca, who had many Jewish friends from Padua and from his army service, was strongly opposed to anti-Semitism. At one time he explained, “I was neither fascist, nor anti-fascist; I was anti-Nazi.” From then on, he reserved his loyalty for the Italian king, Victor Emmanuel III.

In the early days of World War II, Perlasca avoided the draft by working as an import-export agent for the Italian army. He traveled to Zagreb, Belgrade, and Eastern Europe, where he witnessed vicious Axis massacres of Jews and Serbs. 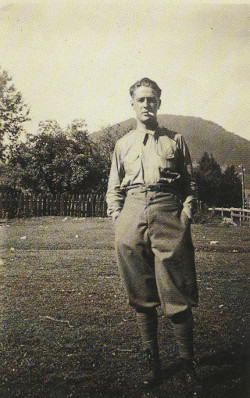 In 1942, he was assigned to Budapest. He found the Hungarian capital “'full of life, where nothing was lacking and the restaurants and theaters were full of seemingly carefree people, many of them Jews.” Tall, well-dressed and stylish, Perlasca also enjoyed an active social life which came to an abrupt end in September 1943. Italy surrendered to the Allies and the country was split. Some aligned themselves to Mussolini’s Italian Social Republic while others supported the king who joined the Allies. Perlasca was arrested as an enemy alien and interned in a camp near the Austrian border. Escaping in October 1943, he made his way back to Budapest.

Life changed drastically in March 1944 when the Hungarian Nazis seized power. Perlasca ran to the Spanish Consulate in Budapest. Producing his vital letter from the Spanish authorities, he received a Spanish passport with his new name: Jorge Perlasca.

He soon discovered that the Spanish Consul Angel Sanz Briz was issuing "letters of protection" for Hungarian Jews who were forced to wear the yellow Star of David. The embassy was overwhelmed with requests from stateless Jews seeking asylum in a neutral country such as Spain or safe passage out of Europe. 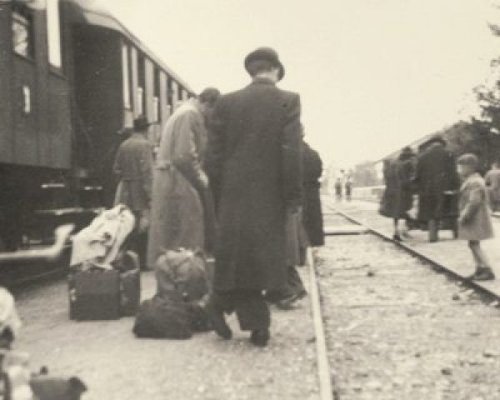 Perlasca rescuing Jews at the train station at Budapest

The Consulate also employed Jews as clerks and housed them in eight apartment buildings under its control. Perlasca offered his assistance. The Hungarian government then discovered that the Spanish officials had been harboring Jews in their houses and embassy and began raiding the homes of diplomats. With Budapest in chaos, Ángel Sans Briz and other officials received orders to vacate immediately. He left a note for Perlasca imploring him to leave too. Realizing that without protection many Jews would be killed, Perlasca bravely decided to remain.

The only person in the Consulate with a Spanish passport, he went to the Hungarian Ministry of Foreign Affairs.

Utilizing his boundless chutzpah and a letter he had forged, Perlasca succeeded in convincing the officials he had been appointed the new Spanish Consul and that Sanz Briz was simply on leave. The German and Hungarian officials believed his appointment and his warning that Spain would retaliate if forced to turn over their refugees. Fortunately for him they were unable to confirm Perlasca’s new status with Madrid and he was permitted to continue working.

Perlasca described his situation: "At first, I didn't know what to do, but then I began to feel like a fish in water. I continued giving out protective passes and looked after the Jews in the 'safe houses' flying the Spanish flag. As the proverb says, 'Opportunity makes the thief.'"

The new "Consul" organized food, medical aid and protection for 5,200 Jews in the Consulate's apartments. An intelligence network warned him in advance of possible Nazi searches.

The diplomatic missions of four other neutral states – Portugal, Switzerland, the Vatican and Sweden – also helped save Jewish lives.

In the following months Perlasca did more than organize the hiding, feeding and transport of thousands of Jews. He came up with a brilliant plan to use an old Spanish law which gave Spanish-born Jews full citizenship and protection. Perlasca successfully issued fake safe-conduct passes claiming that Hungarian Jews were actually Spanish-born. The passes read:

“The relatives of all Spaniards in Hungary require their presence in Spain. Until we are able to reestablish communications and the journey back is possible, they will remain here under the protection of the government of Spain.”

Giorgio Perlasca teamed up with Sweden’s Raul Wallenberg, Angelo Rotta from the Vatican and Friedrich Born from the International Red Cross to vouch for Jews across Hungary. Together they helped organize and secured the escape of thousands of Jews.

However Raoul Wallenberg possessed plentiful funds but there was no one to pay Perlasca a salary. When consular funds ran out he used his own money, then that of the local Jewish committee. Finally he had to ask for funds from the families hiding in the apartments.

A fearless man, Perlasca acted as if he really was a protected diplomat, openly risking his own life to save others.

One December day in 1944, he went to the train station and began arguing with a German officer, demanding the release of two Jewish children on a train headed for Auschwitz. Also present was Raoul Wallenberg, the Swedish diplomat whose similar daring acts also saved many Jewish lives.

“A young SS major pulled out his pistol, pointing it at me,” Perlasca later recalled. “Wallenberg, standing nearby, shouted at him that he could not treat a Spanish diplomatic representative like this. Then, at a certain moment, an SS lieutenant-colonel arrived and asked what was happening. He listened, then ordered the major coldly to do nothing more because, 'Sooner or later', he said, 'we'll get the children anyway.' They went away and it was then that Wallenberg told me that the SS colonel was the notorious Adolf Eichmann.”

Perlasca once noticed some Nazi soldiers leading a group of Jews to their execution. Using his bold air of authority, he insisted that the soldiers release the prisoners to his care. He overruled their protests and eventually they walked away leaving the Jews safely behind.

When the Red Army bombarded Budapest towards the end of 1944 the Ministry of the Interior planned to move all Jews from the consular apartments into the ghetto, then set it on fire.

Perlasca refused to believe this horrific plan would be put into effect until he saw Jews from the Portuguese-protected apartments being marched to the ghetto. Rushing to the Minister of the Interior he begged him to stop the plans but his humanitarian and religious arguments had no effect.

Perlasca then switched to threats, warning that if the Spanish government was not assured within 48 hours that the Jews under its protection would be safe, all Hungarians in Spain would be imprisoned and their property confiscated. He further added that the Brazilian and Uruguayan governments would be urged to follow suit. The Minister of the Interior decided to abandon his vicious plan.

When Soviet troops entered Budapest in January 1945, the Jews were finally able to leave the apartments. However the Russians forced Perlasca to work as a street cleaner.

After a few weeks he was able to leave for Istanbul and eventually returned to Italy. There few people would credit his story. "My wife didn't say outright that she didn't believe me," he recalled. "But I was sure she was not convinced."

So Perlasca ceased speaking about his exploits in Budapest and lived in relative anonymity.

The full facts of his extraordinary story did not emerge until the late 1980s when some Hungarian Jews recalled the events of wartime Budapest at a family gathering.

"Do you remember that Spanish Consul?" someone asked.

Several did, and they placed a notice in Budapest's Jewish newspaper asking for other testimonies. Gradually Perlasca's story emerged and the tributes finally began to flow. In 1989 the Hungarian Parliament awarded him its highest honor and a statue was dedicated to him in Budapest. Israel accorded him honorary citizenship and dedicated a tree to him at Yad Vashem in Jerusalem.

As part of its Righteous Among the Nations project, the Raanana Symphonette Orchestra in Israel commissioned an original orchestral piece, “His Finest Hour,” from composer Moshe Zorman in tribute to Perlasca. The piece had its debut at a concert attended by Perlasca’s son Franco and daughter-in-law Luciana Amadia.

In 1990 he was honored in New York by the Raoul Wallenberg Committee.

The Spanish king awarded him the Order of Isabella and a pension.

In Italy he became the subject of a book and a feature film.

Like many Holocaust heroes, he downplayed his valor to the end. Deploring the fuss, he asked, “Wouldn't you have done the same? If you had seen Jewish children being shot in the streets?" 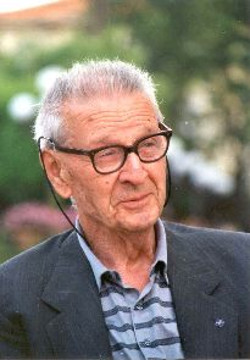 Dr. Hugo Dukesz, one of the Jews saved by Perlasca, wrote this tribute to him, "We want to express the affection and gratitude of the several thousand Jews who survived, thanks to your protection. There are not enough words to praise the tenderness with which you fed us and with which you cared for the old and the sick among us. You encouraged us when we were close to despair, and your name will never be omitted from our prayers. May the Almighty grant you your reward.

Holocaust Survivor Reunited with Daughter After 80 Years
It Takes A Lot Of Faith To Be An Atheist
How Instagram Brought Back This Nostalgic Soup
What Makes Eli Run?
Comments
MOST POPULAR IN Israel
Our privacy policy