The Bride who Visited a Hospital on her Wedding Day 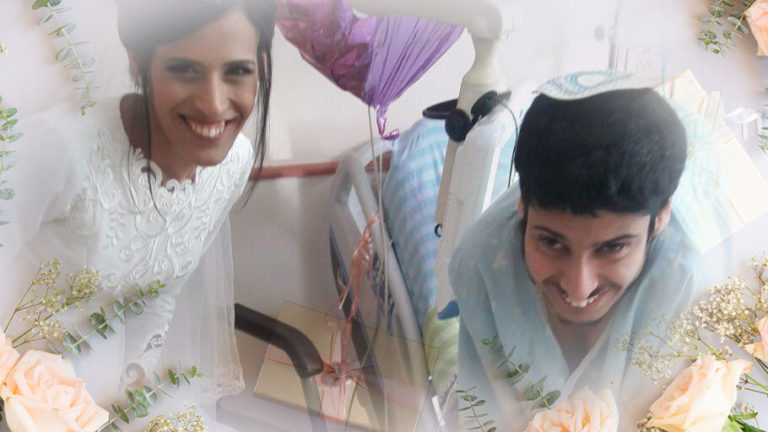 Yael Levy used her wedding day for an incredible act of kindness.

It’s not the way you’d expect a bride to spend the biggest day of her life, but Yael Levy (33), says her detour to the Beilinson Hospital in Petah Tikvah on the way to her wedding is an experience she’ll never forget.

Parking outside the hospital, glittering in a stunning white dress, with her makeup, hair and smile turning the heads of dozens of patients, visitors and hospital workers, Yael graced her way through the hospital reception hall towards the elevator amid a flurry of selfies and Instagram updates. The patient she had come to visit on the 7th floor was 27-year-old Hillel Elazar who had suffered from medical complications his whole life. 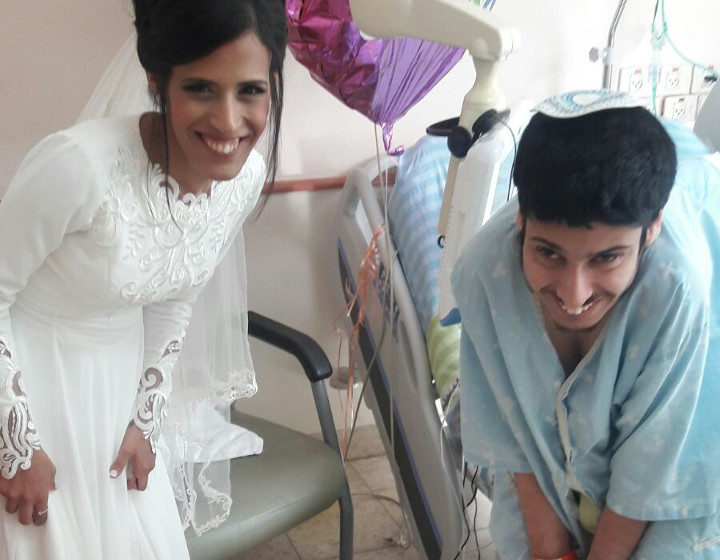 Yael, originally from Jerusalem, was a physiotherapist and Hillel had been one of her patients who she visited daily. Hillel became like a brother to her. Six months later he would pass away.

Hillel Elazar was born with Vater syndrome, a rare condition that affects 1 in 30,000 children with serious abnormalities affecting much of his digestive and respiratory systems. Since his family could not provide the care he needed, at the age of 9 he was fostered by Benjamin and Orly Ben-Perach who had opened their home to five children with serious medical needs. At the Ben-Perach’s Yael was first introduced to Hillel over 10 years ago.

“He was 16 when I first met him,” Yael told Aish.com, “and despite having so many medical professionals in his life, he welcomed me into his life with a smile like I was his older sister.” 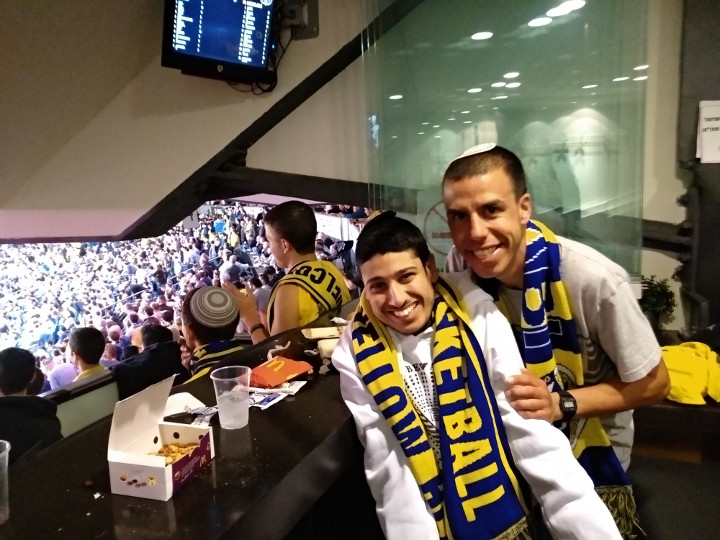 “We had a great relationship. Even though he had a debilitating physical condition, he was a fun, happy boy, always positive and he was great company.”

“He ate through a tube, needed apparatus to breathe with and was limited according to temperature outside as to when he could go out or not, he had many reasons to be depressed,” Yael said, “but when I think about Hillel, I remember his smile and how he really lived his life. He studied in a yeshiva, he wrote songs and made jokes and even volunteered with children who had special needs.”

At the age of 32, having dated for over 10 years, Yael’s prayers were finally answered when she met her future husband Elad Levy (33) also from Jerusalem. As things started to become serious she made sure to introduce him to Hillel. 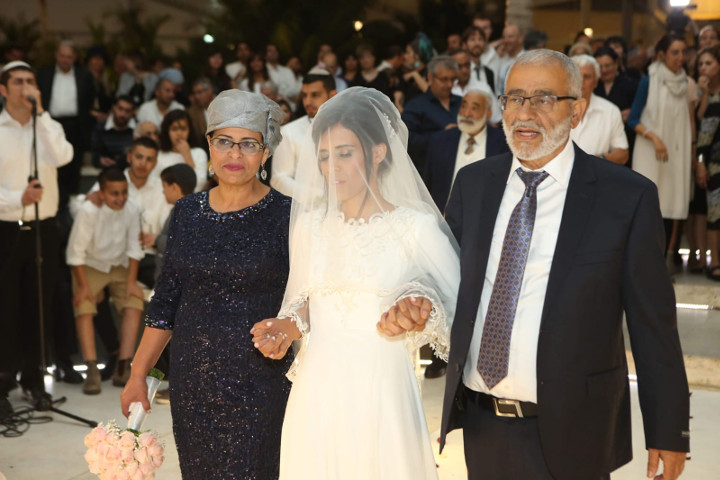 Yael walking down the aisle with her parents

“Hillel knew how much I wanted to get married and he had been praying for me to find happiness for years,” she says. “Now the day had finally arrived, what I wanted was to bless him,” referring to the Jewish custom of brides and grooms to bestow blessings to others on the day of their wedding. But the week before Yael and Elad’s wedding, Hillel had collapsed at another family celebration after one of his breathing tubes became detached and was hospitalized for several weeks.

“I wanted to show him how important he was and visit him on the day itself.”

Afraid she might be convinced of doing something more practical, she told only a few friends and family and made sure to leave a spare hour in her preparations.

“It was a little surreal arriving at a hospital totally made up and in my wedding dress,” Yael said, ”but when I went into his room, he was so happy to see me. I had told him I would come, but he told me didn’t believed it would actually happen.”

“I went with a few friends and a crowd of people gathered around Hillel’s room to see what was going on. We took pictures, and we gave each other blessings. There was an incredible energy in those few minutes and he sent me some amazing messages afterwards explaining how special he felt.”

“On your wedding day, you can do so much to lift people. I could have taken a few hours to go to the Western Wall, but I just felt that this is what I had to do. If I could relive the day,” she said, “I would have done more.” In fact, seeing the impact of her visit on Hillel, she actually drove to a nearby home for the elderly where she also treated patients, only to find when she arrived that most of the residents were sleeping!

“A bride on her wedding day has such power to bring happiness to people’s lives” Hillel’s foster father Benjamin Ben-Perach said. “Words can’t really explain how much that visit meant to Hillel. He literally told everyone who came to see him about it. Precisely when you’d expect her to be organizing her own day she made a decision to do something so special for another person.”

Ben-Perach said, “I want other bride’s to be inspired by this act of kindness. You have the power of queen. It’s an unbelievable power you have for one day and it can bring such happiness.” 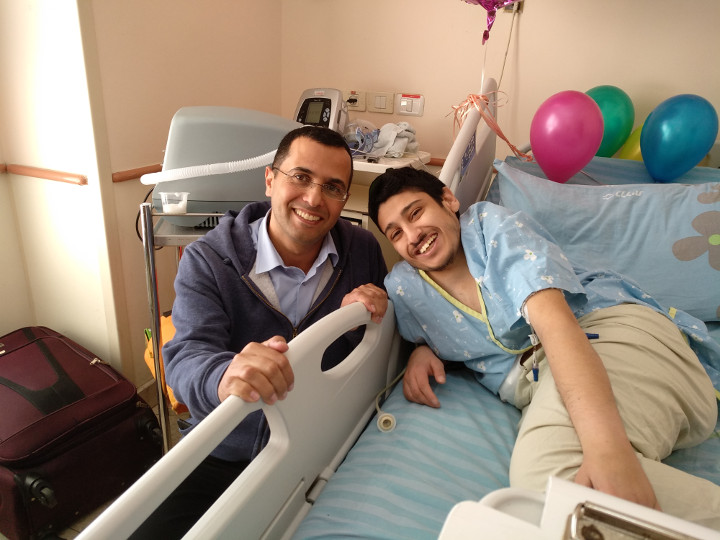 The significance of Yael’s wedding day visit sank in when Hillel passed away following an infection last summer. “It was a shock to his family and friends,” Yael said. “Even though he had so many complications, he didn’t live like an ill person. He knew how to live life; he was such a positive person.”

Looking back at how she spent her wedding day almost a year later she said, “It is one of my most treasured memories.”

Each Name A Promise

A Blast in Israel
Don’t Believe in Other Gods Versus God is One
Seeing Without Eyes
Why Shouldn’t We Eat Whatever We Want?
Comments
MOST POPULAR IN Israel
Our privacy policy
Aish.com Is Looking for Great Writers