Rabbi on Ventilator for 4 Months is Leaving Hospital 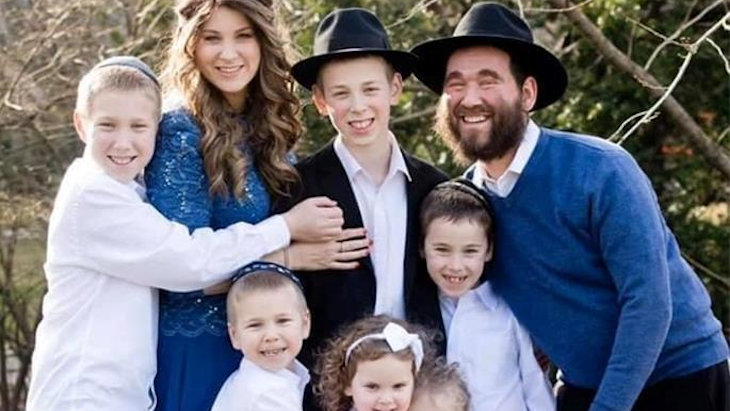 An interview with Sarah Dukes, whose husband nearly died from Covid-19.

Yudi Dukes is coming home. After five months being hospitalized for Covid-19, God willing, Rabbi Yehudah “Yudi” Dukes, 39, will soon be able to leave NYU Langone Medical Center, where he’s been hospitalized since March 2020. His next stop will be a rehabilitation center and then, ultimately, home to join his wife Sarah and their six children in Cedarhurst, New York.

“There’s a happy ending on the horizon,” Sarah Dukes hopes. In an exclusive Aish.com interview, she explained how she’s managed to keep her faith and inspire countless others around the world during the long months her husband was gravely ill.

It wasn’t easy. Yudi, the director of the online Jewish learning network JNet, is used to being active and teaching others. But for the past five months, he couldn’t talk, walk or even move.

The fact that Yudi is breathing on his own is nothing short of a miracle.

He spent four months in a coma, and four and a half months on a ventilator. (When I told my husband, a doctor, that I was writing about a rabbi who spent over four months on a ventilator, his first reaction was that it’s virtually impossible to survive such an ordeal.) For nine weeks, Yudi was so ill doctors put him on an ECMO (“Extracorporeal Membrane Oxygenation”) machine, which completely bypasses a patient’s heart and lungs. Used only for the most seriously ill patients, it’s extremely rare for anyone with this level of damage to spend so much time on an ECMO machine and live. While he was ill, Yudi suffered a stroke, a hole in his lung, and had his lungs collapse four times. The fact that he is now breathing on his own is nothing short of a miracle. 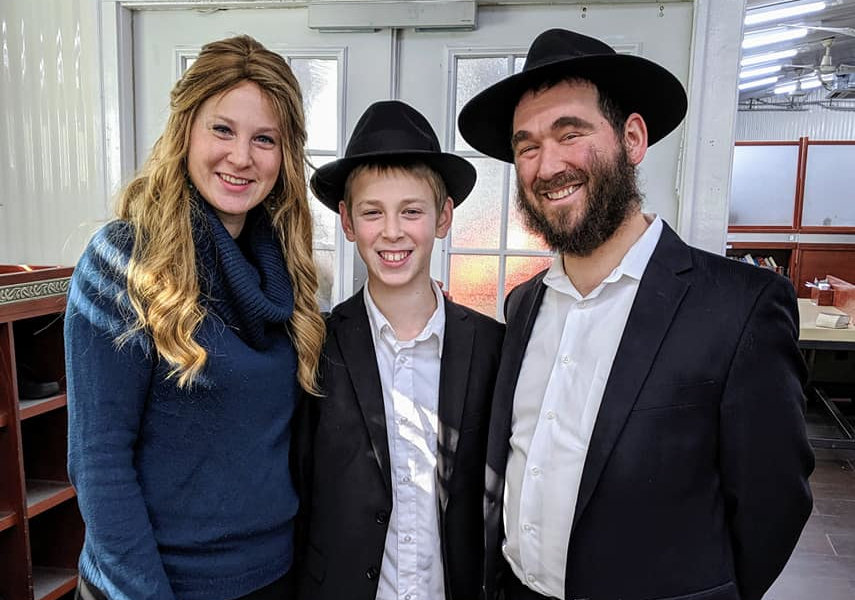 Sarah and Yudi celebrating the Bar Mitzvah of their son

Sarah remembers the date that Yudi first felt ill: March 29. Covid-19 was already a concern and the family was quarantining. Yudi was just 38 and in good health; there was nothing to indicate that Covid-19 would harm him so seriously. Yudi began to feel ill and cough; before long, he couldn’t even talk because he was coughing so much. Then he couldn’t walk. An ambulance rushed him to the hospital where his breathing continued to deteriorate.

Sarah wasn’t able to visit him in the hospital because of quarantine restrictions. A few days later she received a phone call from a weak-sounding Yudi. His breathing was so bad doctors were going to intubate him. Patients on ventilators are kept sedated; Sarah wouldn't be able to speak with her husband.

With everyone in their city quarantined, Sarah found herself at home taking care of six young children ranging from three to thirteen. No one was allowed to visit to help out. “On the second or third day after Yudi was in the hospital, I was doing laundry and I thought ‘I can’t do this’,” Sarah recalls. It was an awful moment. But the necessity of taking care of her family forced her to push through. “I said, ‘No - I can do this’ because I have no other choice. ‘God willing, I can and I will.’”

Much of her strength to go on came from Sarah’s training as a mental health counselor. For years, she’d has helped patients using Cognitive Behavioral Therapy (CBT); now she found herself using these techniques on herself. “CBT is all about stopping negative or destructive thoughts and replacing them with positive thoughts,” she explains. She tried pushing away her own fears and despair. “I had to do a lot of negative thought-stopping because it was very scary times.”

A classically trained musician, Sarah also turned to music to help her cope. She composed a moving orchestral work with her son Baruch. Called “Once Again,” it captured her yearning that one day Yudi would be able to rejoin his family.

Sarah also tapped into her Jewish faith to help her cope. Growing up in North Carolina, she and her family began to embrace an Orthodox Jewish lifestyle when Sarah was young. As a student at Stern College for Women in New York, Sarah was the president of the college Chabad organization. One Shabbat she accompanied a group of Stern students to New York University’s Chabad house for Shabbat dinner. There she met Yudi, who was staying in the area for Shabbat. They became acquainted, and were later set up on a date by Yudi’s sister. The Dukes have now been married for fifteen years.

Sarah’s deep-seated Jewish faith helped her realize that everything that happens occurs for a reason, that we each have a unique set of tasks to perform on earth, and that we’re each given exactly the right tools we need to live up to our own unique potential.

Sarah began avoiding the terms should and shouldn’t. “I don’t say ‘I shouldn’t have to go through this’,” she notes. That way of thinking would have led her feelings of bitterness and negativity. Instead, Sarah focused on what she could do given the set of challenges and circumstances in which she found herself. “We are where we are because that’s where we are meant to be. This is what should be happening - because this is what is happening.”

Ironically, the very severity of Yudi’s illness helped Sarah see it as part of a complex Divine plan. “At the beginning of this journey, I was thinking this whole coronavirus doesn’t make sense,” she explains, noting that the illness it causes is unpredictable. One person might become seriously ill with Covid-19, God forbid, while another person has only a mild case. Yudi, who was young, healthy and in quarantine, was an unlikely candidate to become so ill. “Because of that it was so clear to me that he was handpicked to go through this unique mission,” Sarah says. “It was clear to me that it was all in God’s hands.”

After coping all by herself at home for a couple of weeks, in mid-April Sarah also got Covid-19. “I reached out to my Rabbi and he said it’s time to bring someone else in.” Local teenage girls volunteered to help out, including one teen who volunteered to move into the Dukes’ home and looked after their six children, refusing any payment.

Sarah was overwhelmed with the kindness and generosity of her close-knit Jewish community. “I don’t think I’ve cooked dinner in five months,” she notes. 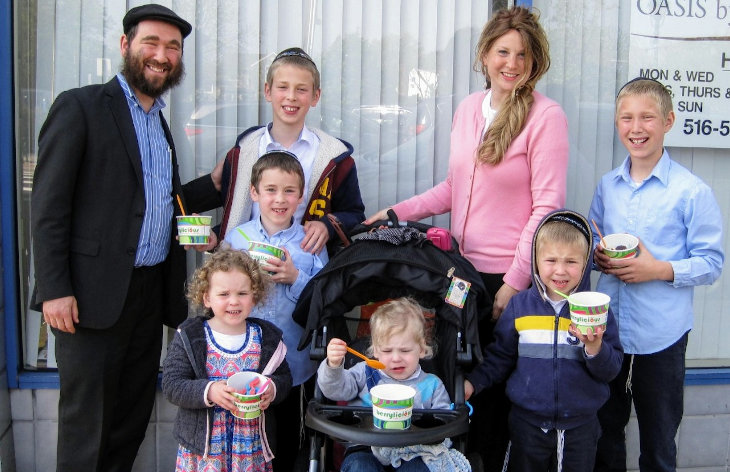 Her neighbors and fellow Jews rallied around to help pray for Yudi’s swift recovery. Several women started round-the-clock prayer groups, organizing women to say Psalms and pray for Yudi’s recovery in shifts every day. Many people volunteered, doing what they could to help. Some of the Dukes friends started the “Bring Yudi Home” fundraising campaign in order to help raise funds to help cover the family’s expenses. “He’s not going to work for a long time, and there’s so much therapy he’s going to need,” Sarah observes. People around the world have donated funds to support the family.

Sarah’s father, a pulmonologist, told Sarah’s sister that the chance of Yudi recovering would be as miraculous as the splitting of the Red Sea. That didn’t cause Sarah to despair. She kept reminding herself that with God’s help, anything is possible. “One thing that I would tell myself is that this is temporary. I’m in this very hard place now, and the pain is very deep, but it’s temporary. One of the things I’d think about is to breathe in faith and breathe out fear.”

As Yudi prepares to go home, Sarah is grateful to all the people who’ve helped in his recovery. His medical team was amazing, she notes, in particular his hospital physician, Dr. Pedro Rivera. In addition to his medical work, Dr. Rivera has given money to charity in Yudi’s honor, just like thousands of people around the world. Sarah is certain that these countless good deeds helped in Yudi’s recovery. 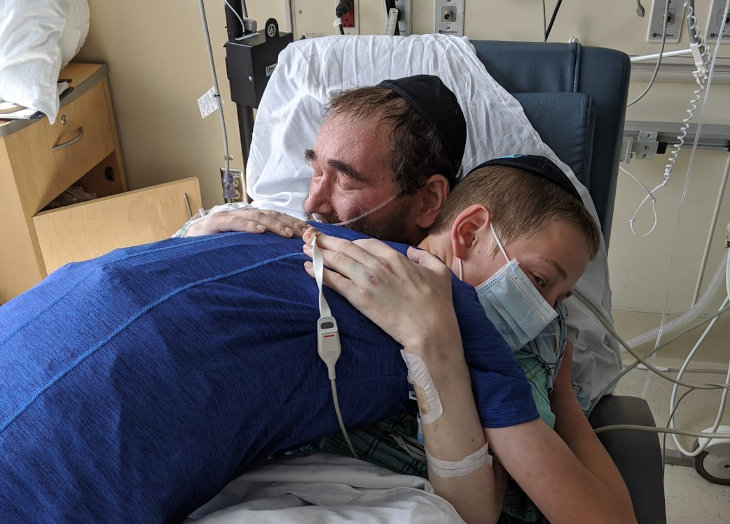 Sarah recently posted a picture on Facebook of her oldest son Mendy hugging his father for the first time since March. “With the help of God, your prayers, and good deeds, an exceptional medical team, and faith, Yudi was given a second chance at life,” she shared.

Holocaust at the Shabbos Table

An American Jew in Russia

My Choice
Where Do the Laws of Nature Come From?
Saadiah Gaon, Rashi and Maimonides: How Three Rabbis Revolutionized Judaism
King Sennacherib and the Siege of Lachish
Comments