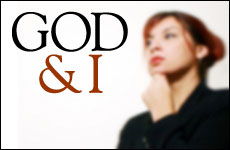 My conversion to Judaism.

The following essay was written by a woman currently undergoing conversion with the London Beth Din.

My father has been an atheist for most of his life, although he was brought up as a Protestant. My mum was raised Hindu although she has not observed any practices since she was 18.

My parents always told me and my sister that they didn't feel it was their place to impose a religion on us (mainly because they were from such different backgrounds), but that we would be free to choose ourselves. Religion was seen as being something that other people do, but I was always encouraged to think about faith.

Until the age of 16 or so, I didn't think about belonging to a religion. I believed in something, but didn't know what. I always felt that there was something bigger than me that I was not able to comprehend. I remember lying in bed as a child and talking to God, and I was always curious about religion.

I went to a Christian school until the age of 14 but became very close to a Jewish girl there. When her father sadly died when we were nine, I remember being struck by the process of sitting shiva and the enormous support her family received from the community. As someone brought up in a community of four(!), it was something which touched me tremendously. However, I had no structure to my beliefs, and no way of expressing them. My dad has since reminded me that I was fascinated with Judaism for many years; I had assumed that it was not until much later that I started to look towards Judaism to give me that structure. However, we recently spoke about how much I used to talk about Judaism and the Jewish people and he found an exercise book in which I had written about Sukkot and the Exodus at age 11!

For a few years while I was a teenager, I became very angry with God. We had a very difficult time as a family, and I went through the experience of losing two family members who had been very religious (although they were not Jewish, obviously). At this point I remember questioning for the first time whether there was a God, and whether I had been kidding myself by feeling that I was being watched over. I went through a very angry period which I remember as being quite a dark and difficult time.

As I walked down the railroad tracks in Birkenhau, I felt an enormous connection to the people who had walked there 50 years before.

I'm not sure what changed for me, but I vividly remember visiting Auschwitz-Birkenhau when I was 16 on a school trip. As I walked down the railroad tracks in Birkenhau behind my classmates, the sky suddenly turned completely black and I felt an enormous connection to the people who had walked there 50 years before. It was the first time in my life I had felt such a strong connection to a community other than my immediate family, and it was astonishing for me. After returning from Poland, I decided to begin exploring this further and wrote my A Level History project criticizing Holocaust revisionism.

Around this time, I became a lot friendlier with Aryeh and he began telling me about his religion. I remember being struck by how openly he talked about his relationship with God, and how firm his belief was. Previously, the concept of God had always felt very private to me, and almost embarrassing, but he was so proud to believe and to see himself as having a close personal relationship. I began to feel that perhaps I could be entitled to such a personal relationship as well, and in a way started repairing the relationship that I had felt with God when I was younger.

That was, I suppose, the start of the journey that has brought me to where I am now. About five years ago, I decided to test my ideas about ‘rules' being restrictive, and started to eat only kosher meat and stop mixing meat and milk in order to see what effect that might have on me. I was surprised at how broadly it affected my life.

Firstly, simply having to think about the food I was preparing and eating encouraged me to consider where it had come from and the special significance I could give to food by having to think about it in this way (rather than just as ‘fuel'). I did a lot of research at this time about kashrut and the emphasis of compassion, especially in blessing an animal, really struck a chord with me. Secondly, it had the unexpected effect of making me think about my identity. I had always been thoughtful about my mixed-race identity, but that felt like it singled me out. Now I felt an affinity to a community, just through the way my actions set me apart from other people. At this point, I was still eating in non-kosher restaurants (ordering vegetarian food), and I was struck by how much I had to think about my identity even just looking at a menu, or going to the supermarket. Rather than feeling limited as I would have expected when I was younger, I felt somehow special and enjoyed feeling that the simple act of eating could encourage me to be so reflective.

Finally, it also had the effect of changing my identity to other people. I found myself shocked at the strong reactions I received -- many of my friends questioned why I would change my lifestyle at all. This was the first of many experiences of having to explain my actions, and it had the dual effect of encouraging me to think about my reasons for doing it, and increasing my affiliation with the Jewish People.

Following this decision, I spent a long time reading on my own, and thinking a lot about how I felt about religion, and what it would mean to be Jewish. The more I read, the more I found views which I felt described the values I already had, such as being hospitable to others, being careful with one's words, the separate roles of men and women, being charitable and so on. I was particularly struck by ideas of God as being present in the world but hidden, and being an incomprehensible concept that we could never fully understand. This seemed to really put into words what I had always felt, and it felt like a relief to find an idea of God which was so separate from humanity, so broad and encompassing, and yet still personal and close.

I felt as if God was listening to me.

Around this time, I started experiencing my life quite differently. The only way I can describe it is that I felt ‘accompanied'. As I was reading, and thinking about whether to try to become Jewish, a number of things happened which made me feel as if God was listening to me, and telling me that I was on the right path. At times, I put this out of my head, thinking "I'm just one person, why would He care?" but it continued and gave me a lot of comfort. Even now, I have found that when times are difficult, something always happens to let me know that I am on the right path and that I should persevere.

Feeling this growing personal relationship with God has not only given me strength and comfort, but I think it has also had a huge effect on my relationships with other people. Shira, who is tutoring me in Jewish studies, told me some time ago that I should make my decisions thinking about what God would want me to do. I find that this underpins a lot of my thinking now. I feel that it has made me more forgiving, more determined to see the best in people and constantly thinking about whether I am ‘doing the right thing'. This has at times meant that I have made choices which have disappointed others, or have left me exhausted trying to be there for others, and sometimes even which have made others see me in a bad light (for example if I have challenged someone for doing something I have felt was morally wrong), but I get a lot of strength from feeling that I am trying to live my life in this way.

This has all happened in the background of introducing God into my life in a more tangible way too. Going to synagogue for the first time was a very moving experience for me, and I am eternally grateful that we chose Yom Kippur as my first experience of Shul; listening to that Kol Nidre service is something I will always remember. I am also thankful that I did spend such a long time learning on my own before I went to the synagogue; the rather intimidating experience of going to my first Shabbat service, and trying as I have to find a synagogue which suits me and which I find welcoming has been made much easier by the feeling I have when I open the siddur in shul and feel that I am on my own talking to God. Incorporating prayer into my daily life has also created a foundation for me to make the most of every day; saying ‘Modeh Ani' and thinking about starting my day ‘like a lion' always makes me jump out of bed in the morning! Praying every morning, saying blessings throughout the day and reflecting in the evening remind me to be thankful and give me pause to consider what I am doing, how I should go about my day, and how I can improve the next day.

It has been quite a journey. In many ways though, it feels almost like I have done a lot of traveling and come full circle, coming back to the close and pure relationship I had with God when I was a child talking to him before falling asleep. It is a great source of strength to me to have that feeling of being watched over once again.