When God Sends You a Message… 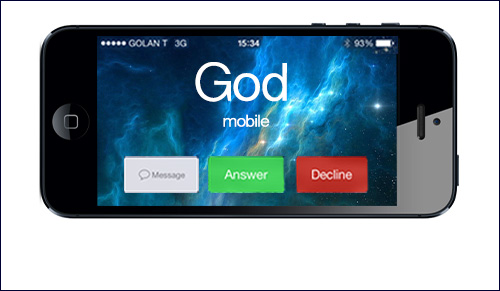 It would be nice to have caller ID.

Jake and I were paying scant attention to our pizza because the moment was so exhilarating. We were two scions of pampered home lives in a posh suburb on Long Island, products of a high school known for sending graduates to the Ivy League and after that a life of material success living the American dream. Yet here we were in a grungy pizza shop in East Jerusalem, Jake in a suit (a suit in August, mind you, and not for a job interview) and beard (this was before John Krasinski and Ryan Gosling made beards cool) and payos (which, despite Matisyahu’s Chassidic phase, are still not cool). And he wasn’t even Jake anymore, he was Yerachmiel, which is a lot more syllables.

We were sitting talking about how he came to be studying in a kollel in Jerusalem when the last thing I’d heard about him was he was sitting on the cold stone floor of an ashram in Brooklyn studying Hinduism, and how I had traveled across half the world to find him when the last thing he’d heard about me was I was in New York writing song lyrics in a Broadway musical workshop.

That’s when he said one of the most important things anyone ever said to me, a thing which he later claimed he never said.

“I still don’t understand how you found me,” Jake said. (No, that’s not the Important Thing He Said. It’s coming in a minute.)

I explained, “I called your house after not hearing from you for so long…”

“You still had my Queen album, and I was having a party. Also, I was wondering what happened to you. So I got your mother on the phone, and she told me you had gotten religious, moved to Israel, and were studying to be a rabbi. That sort of clicked, since I knew you were always searching for answers and meaning and stuff, and I said to your mother, ‘That’s great.’ And she screamed, ‘You think that’s great?!’ Then she said some other stuff about mental illness, and throwing your life away, and thank God you didn’t talk to your brother and sister too much. Before I got off the phone, I got your address.”

“Yeah, that sounds like my mother.” (That’s not the Important Thing He Said either. Be patient.)

If I was going to say ridiculous things about religion, I might as well say them out of knowledge, not ignorance.

A year after the phone call to Jake’s mom, I was on a trip to Israel because a couple of friends from college kept telling me that if I was going to say ridiculous things about religion, I might as well say them out of knowledge and not ignorance. What was I supposed to say to that? “No, I prefer to be an ignoramus”? So I read a book on comparative religion, and another on Judaism, went to a few services, and talked to a few people. It was all interesting, but in a college course I had learned that a real anthropological study requires immersion in the subject culture. (I think it was Margaret Mead who said it, but that might be because I can’t think of any other anthropologists. Can you?) So I took a trip to Israel, armed with Jake’s address (this was before cell phones, unless you count those walkie-talkie things millionaires carried around in their briefcases).

I was worried that Jake’s kollel might keep business hours and would close at 5 p.m., so I ended up running through Mea Shearim – a swarthy guy with a moustache, wearing jeans and no yarmulke, carrying a backpack – it’s amazing someone didn’t assume I was about to hurl the backpack into some shul yelling “Allah akbar!” and shoot me. Anyway, no one did. I found Jake, and he mumbled something and told me to say “Amen.” He then explained there’s a blessing for seeing a friend unexpectedly after a year, the same one for praising God for returning the dead to life – then we went out for pizza and caught up, happy to be back from the dead.

We talked about friends we had or hadn’t kept in touch with from high school. “You know, I talked to Artie right before my trip,” I told him. “He says he went to Hebrew school, already knows all about Judaism, thinks you’re flipping out, thinks I’m wasting my time. But you can’t believe how much I’ve learned in the last couple of months that he has no clue about – about Jewish law, and philosophy, and the meaning of historical events, and the return to the Land, and all that. He thinks because he knows something, he knows everything – and he knows practically nothing!”

Then Jake said, “That’s what I think about you!”

After an awkward pause, I said “Good point,” and we talked some more, and he went back to the kollel and I went back home.

No matter how much I knew, there was someone who knew more.

Years later, when my wife and I took our family to Israel for our son’s bar mitzvah, I told Yerachmiel (couldn’t call him Jake anymore) about the Important Thing He Said, and how grateful I was. He told me he never said it. Moreover, it’s not something he would ever say. “Why would I be so obnoxious, and risk alienating you?”

When I told him there was no way I could have misremembered, because I’ve kept that statement with me every day since, he said, “Oh. I understand. I didn’t say it, God did.” Perhaps the consensus on Yerachmiel was right and he had indeed flipped out.

But he explained, “There are key moments in everyone’s life, inflection points, where God sends a message to help them along. Clearly, God wanted to send you a message. I was just the messenger.”

Wow. I started combing my mind for other life-changing utterances I’d experienced. There was the first Passover Seder that my wife (then my fiancée) and I attended, at the home of Rabbi Rosen, a very religious man (he had a black hat), Mrs. Rosen, and their dozens of children. We had no preparation, no idea that the Seder was more than 10 minutes of “We were enslaved, we were freed, let’s eat.” We watched in amazement as he wept over the horseradish and screamed at Pharaoh and the children stood on chairs (the ones who weren’t sleeping under the table or being dragged to and from the kitchen clutching their mother’s ankle). Then he jammed an obscene amount of matzah into his mouth and chewed and chewed, the air filled with crunching sounds and flying matzah flakes. He couldn’t even sit up straight, needed a pillow to prop himself up – and we’d only had a couple of glasses of wine!

“My wife is the smartest person I know.”

That’s when he said it. Mrs. Rosen had just gone into the kitchen for the umpteenth time, and he leaned over to us surreptitiously, a sly smile on his face, and declared, “My wife is the smartest person I know.”

And there it was. In a single statement, he dispelled one of my big concerns about Judaism, that it was misogynist. The respect this man had for his wife, the joy he took in telling us about her abilities, was palpable, real. Just last month, I saw him at a wedding for the first time in many years, and recalled the event to him. He literally jumped back in his chair. “I said that? I just volunteered it?”

“Yes, what’s wrong with that? It was great!”

“Because,” he said, “I might think it, but I would never risk embarrassing my wife like that.”

We all get messages from God. Sometimes the trick is being ready to hear them, sometimes it’s being ready to act on them, and sometimes it’s being able to figure out which is an actual message and which is just an overactive imagination. (Believe it or not, I’ve sometimes been accused of having an overactive imagination. Usually, when explaining my line of thinking to my wife for something that was, in retrospect, really stupid.) The Talmud says, “From the day the Temple was destroyed, prophecy was taken from the prophets and given to fools and children.”

I once had an offer from Tom Rose, publisher of the Jerusalem Post, to come and work for him in Israel. I wrestled with the idea for days, the pros and cons balanced, looking for the thing that would tip the scales. On my way to work one morning, I turned on the car radio and immediately heard Tom say, “I’ve really got to get you to move to Israel.” I almost lost control of the car.

In shock, I pulled over and turned up the volume. Tom was on with Don Imus, who often had him on the show to get his perspective on Middle East politics. The invitation was to Imus, not me. But was it? Was this God’s way of telling me to make aliyah? Could I make a life-changing decision based on a morning talk show drive-by? My wife, of course, said no (see above comment), and we stayed put – and within the year Tom had left the Post.

But all this has got me wondering. Yes, sometimes God might put a thought into someone’s mouth for your benefit. But that person thinks he’s just talking, he has no clue he’s become the Oracle of Delphi. Did God ever put words in my mouth for someone else’s benefit when I thought I was just talking? Well, no one ever told me I did. I tell my kids a lot of things that I think are good for them, but so far they don’t seem to have paid any attention.

Being the recipient or conduit of messages from God requires some effort. Maimonides enumerates the prerequisites for prophecy, including wisdom, righteousness, joyfulness, and self-control. One of the ways prophets would get themselves in the right frame of mind was by listening to music. I’ve got that down.

I’m working on the other ones.

Bruce Springsteen and Me

You've Got a Friend: A True Story about the Power of Connection
The Promise Of The Land
Which Chat Are You On?: Parshas Behar/Lag Ba’Omer
Do You Like Slow-Cooked Food? Thank the Jews
Comments
MOST POPULAR IN Spiritual Odysseys
Our privacy policy