Netanel Felber's Message: Don't Give Up 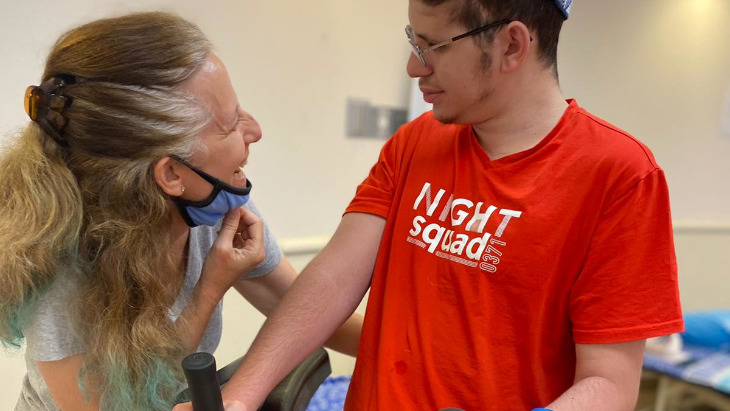 The progress of U.S. born Israeli soldier, Netanel Felber, who was shot in the head almost three years ago, continues to inspire.

A year ago Netanel left the hospital and moved back home.

“The progress Netanel has made has been incredible,” Judi Felber, Netanel’s mother told Aish.com. “He communicates with us, he smiles and laughs and can play games. Two years ago, I wouldn’t have believed that I would be back at home with my son playing a game of Connect 4, but he never gives up.” 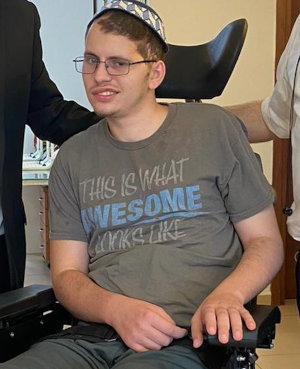 Netanel Felber is back in his hometown of Raanana.

In December 2018, Netanel was shot in the head by a Palestinian terrorist while guarding a civilian bus stop. Two other soldiers, Yovel MorYosef and Yossi Cohen, both from Netanel’s combat unit, were killed in the attack.

Unresponsive when paramedics arrived at the scene, Netanel, 21 years old at the time, underwent life-saving neurosurgery. He was sedated and connected to a respirator as he battled for his life, and remained in minimally conscious state for seven months. His slow road to recovery has captured the hearts and minds of Jews around the world, as he defies the odds.

More than two and a half years ago, Netanel was transferred to the Tel Hashomer rehabilitation unit near Tel Aviv. Just before Rosh Hashanah last year he made the long-awaited move back home to Raanana, where his family has lived since they made Aliyah from Silver Spring, Maryland in 2006. Netanel lives near to his family with care-workers helping him day and night. The move, which had been a pipe dream, has opened the door to greater normalcy for the family, and has turbo-charged Netanel’s recovery, encouraging him to make greater strides in his fight for independence. 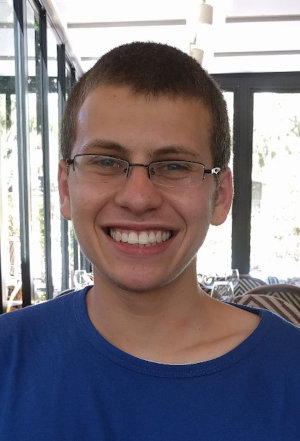 Netanel Felber, prior to the attack in 2018.

“Netanel can’t walk, talk, or eat independently – yet; but he’s responding to people, to us, his family, he is able to show emotions and is making great progress,” Judi says.

“He has made the major leap of starting to be able to vocalize sounds to let us know what he likes and what he doesn’t like, and on a couple of occasions he has vocalized when he wanted his caregivers to come to him.”

Last year, Aish.com reported on Netanel’s first smile since the injury was sustained, which occurred at a party at his yeshiva with friends. “Now, Netanel smiles all the time,” Judi says, “And he laughs with us at funny things, he has a great sense of humor.”

Living back at in his home town has meant Netanel also gets to see more of his friends. “This makes him so happy,” Judi says. “Previously, friends would have had had to come to stay near the hospital for the whole Shabbat to see him but now they can just pop in.”

Living with caregivers who assist him, Netanel is fighting to reclaim some of his old interests. “He has always loved music and now he has an amazing music therapist. One note at a time, he has learned to lift his finger up and down and move it to the right place on the keyboard to play the opening notes of Hatikva, Israel’s national anthem.” 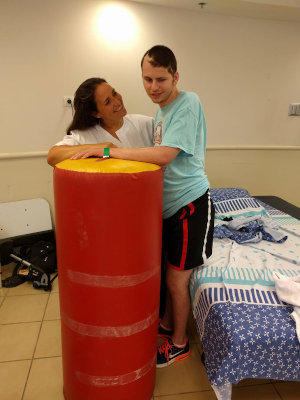 Netanel, with Dr. Adi Gidal of the Sheba Medical Center.

“I am constantly reminded how hard it is for him to do things, which you see babies just do instinctively, such as swallowing and making noises. Everything he does he has to learn how to do it, but the key is that he really wants to get better, and when he wants something, he is willing to work very hard for it.”

“Just this week, his physical therapist was asking him to try something new and he really wanted to, and he tried, but failed. His therapist told him, ‘It’s ok that you didn’t succeed this time, just try again.’ He did try again, succeeded, and his face lit up with a broad smile.”

“This is a message he has given us as a family, and he gives to everyone he meets: Don’t give up, just keep trying. This is what he does, and this is his message to the world.”

Prior to his injury, Netanel loved learning Torah. Back at home he learns Torah with friends and family, and has been back to shul, joining the local outdoor minyan, which he enjoys.

“The days he puts on his tefillin, he does better,” Judi says. “It takes time for his caregivers to put them on in the morning, and even when there’s not much time or there is a rush to be somewhere, I tell his caregiver to help him put his tefillin on, it will be a better day.” 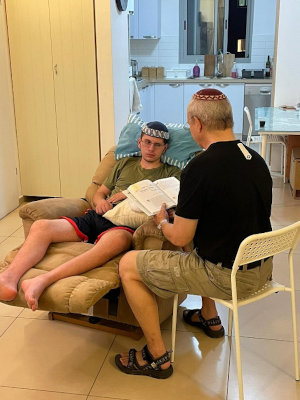 Learning Torah with his father.

“We’ve still got a long way to go,” Judi acknowledges, “and although some days are good, some are not. I always try and find room for optimism, to find something good even when it appears that that it’s the hardest thing in the world to do.”

“Netanel will always have his limitations, but I speak to other parents of children with similar injuries who say that even as after 20 years, they are still making progress. Netanel has shown how hard he is prepared to work at getting better, and I have no doubt, in the future he is going to be walking, talking, and eating, the sky is the limit.”

The Top 10 Most Elite Units of the IDF

Of Fares and Fairness
What Makes Eli Run?
The Tyranny of Materialism
Science Enters the Mysterious Inner World of Consciousness
Comments
MOST POPULAR IN Israel
Our privacy policy