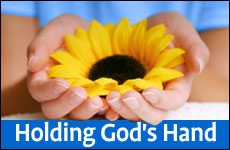 Looking the Angel of Death in the eye and smiling.

For nearly a year now, Simcha Esther (Shari) Gershan has been looking the Angel of Death in the eye and smiling back at him. She's also been telling the world about it on her Internet blog, and plans to share more of her story in her forthcoming documentary.

The day after Purim 2008, the Passaic, New Jersey mother of four went to the emergency room with what she thought was a slipped disc. But the doctors were suspicious. They ordered MRI and CAT scans, which revealed seven malignant tumors growing in the 41-year-old woman's lungs and spine.

She could either grasp the belief that God was challenging her for a reason or she could be a victim. Gershan chose the former.

Always healthy and never a smoker, the petite, vivacious Gershan was in shock. After wading through initial feelings of anger and despair, she realized she needed help. So, while still in the emergency room, she phoned a local rabbi. He helped her see that she had a choice: She could either grasp the belief that God was challenging her for a reason or she could be a victim. Gershan chose the former, ultimately embracing her stage-four cancer diagnosis as "the greatest gift God has ever given me."

The following day, Gershan sent an e-mail to everyone she could think of, telling them about her diagnosis and asking for their prayers and moral support. The response was overwhelming. Lying on a hospital gurney awaiting an MRI scan, Gershan listened as her husband, Yoni, read the e-mails pouring in over his BlackBerry. "I felt God lifting me higher and higher, holding me up through all these people," she says.

Most inspiring were the reports of acts of charity and kindness done in her merit, from Psalms recited to challahs baked to relationships mended. "People were growing Jewishly just for me," Gershan says. Even Gershan's own father, though he doesn't regard himself as a religious man, began laying tefillin.

Gershan's initial group e-mail became the first posting in a blog she later created called Time of My Life. The blog keeps readers updated on Gershan's physical -- and spiritual -- condition. To date, it has scored more than 30,000 hits. Gershan is blown away by the response. "I receive many private e-mails in which people tell me amazing changes they've made on account of the blog," she says. Gershan's postings have included accounts of difficult, albeit uplifting -- and sometimes even humorous -- experiences; she tells of her friends singing in a crowded hospital elevator while escorting her to chemotherapy and of days spent in bed getting over its nasty side effects.

The blog has also struck a chord with other cancer sufferers who identify with Gershan's openness about a disease that is often kept hidden. "I've been approached by people in my community who have been sick for years and haven't told anyone," Gershan says. "It's catastrophic to have to go through this alone." Her ability to cope with her illness with faith and joy has also made her a resource for the newly diagnosed, who frequently contact her for encouragement.

Raised in the New York area, Gershan started her own theater troupe in high school and went on to study directing at New York University.

But she quit just before graduating, disturbed by the unsavory aspects of thespian life. In her late twenties, Gershan made her way to Jerusalem, where she became observant, inspired by Yoni, her soon-to-be husband, and her first teacher of Torah, Rabbi David Aaron, founder of the Isralight Institute, an international kiruv program.

An intensely spiritual person even before her illness, Gershan describes her experience with cancer as an "amazing, awesome and holy journey."

"I know I can't protect my kids from my life. They were chosen for this journey just as I was."

"I [understood] that I've been chosen for this mission because God loves me so much," she wrote on her blog. Gershan sees her situation as a call to teshuvah (repentance). She has answered that call by making many changes in her life -- including taking on her Hebrew name, davening and performing commandments with ever-increasing devotion, letting go of anger and resentment and mending various relationships. "People I had been afraid to bump into in the supermarket joined my circle of healing," she recalls.

Since she first heard the news, Gershan has been upfront about her situation with her children, who range in age from four to eleven. She says that her kids understand what she is going through and are coping quite well. "They are kids; they live in the moment," says Gershan. "Thank God, every time there's been a dramatic change, a physical decline, I've bounced back. They bounce right back with me."

Even with all the positive energy she has unleashed, Gershan does succumb to occasional blue moments, especially when she considers that she might not be around to watch her kids grow up.

"I know I can't protect my kids from my life," she says. "They were chosen for this journey just as I was. [But if they] can grow up feeling that whatever God deals them is for their highest good, then I've given them a tremendous gift."

More than anything, Gershan is rallied by the sense that God is with her, "holding her hand" throughout this ordeal. She notes the many miraculous "coincidences" she's experienced since being diagnosed: from the team of observant physicians who "happened" to be assigned to her to her inclusion in a clinical trial for an experimental drug, with far fewer side effects than chemotherapy, targeted specifically for her tumor type.

Sadly, the drug recently stopped working and this fall Gershan began a course of chemotherapy. Nevertheless, she still manages to keep her spirits up. She maintains her optimism and joyful outlook by focusing on prayer and Torah learning, and by working on her blog.

Gershan is also working on a full-length cancer documentary. Her initial impulse to get behind the camera came during a break between appointments at Memorial Sloan-Kettering Cancer Center in New York. On the way to meet a friend in midtown Manhattan, she noticed a young woman lighting up a cigarette. Gershan spontaneously approached her and shared her story. The woman extinguished the cigarette on the spot, resolving never to smoke again.

"My first thought was that if I save a life, maybe God would save mine," Gershan recalls. She recognized that this incident could be developed into a movie and from that "Time of My Life," named after her blog, was born.

"Joy is my most important weapon."

Since most of Gershan's creative experience had been on the stage rather than the screen, she began working with freelance film editor Tsvika Tal. "Time of My Life" takes viewers into Gershan's private life, following her to chemo sessions, to carpool, to meetings with alternative healers and even to appointments with her wig stylist, where she cuts loose, enjoying trying on different wigs. The film is aimed at the general public, though Gershan hopes that it will reach other cancer patients, whom she says are desperately in need of hope, inspiration and spiritual connection. "It's the story of believing in God, of using suffering as an opportunity for change and transformation and of coming close to the people in my life," she says.

The documentary, expected to be completed and ready for distribution by the summer, is re-energizing Gershan. "Making the film is saving my life," she says. A seven-minute preview was recently shown at the Arts and Torah Association for Religious Artists (ATARA) conference in Manhattan. After the screening, dozens of women followed Gershan out the door to tell her how moved they were by it. "If seven minutes could do that, imagine what an hour and forty minutes could do," she says.

While researching cancer documentaries, Gershan discovered that most protagonists die at the end. But she's not letting that get her down. "Joy is my most important weapon," she insists. "I'm not in denial. I realize that I might die, but I try to live like a child, always in the moment."

Posted with permission from the Spring 2009 issue of Jewish Action, the magazine of the Orthodox Union.

With deep sorrow we record the passing of Shari Gershan, Simcha Esther Bas Chaya Pesha. Simcha Esther returned her pure soul to the loving "Arms of Hashem" on the Holy Day of Yom Kippur during the time of Neila.

May her remembrance be a blessing and a continued inspiration in our lives and the lives of her children. May her soul be bound in the bonds of eternal life.

A documentary film has been made of her life - view the trailer here.

Carol Ungar is a writer, mom, bubbie, and avid challah baker. She's the author of Jewish Soul Food--Traditional Fare and What it Means (Brandeis 2015) the first and only cookbook that not only shows you how to cook Jewish but tells you why. Available at amazon.com, bookdepository.com and bn.com.

I Don't Fit in a Box

Arriving At Sinai
The Promise Of The Land
Which Chat Are You On?: Parshas Behar/Lag Ba’Omer
Do You Like Slow-Cooked Food? Thank the Jews
Comments