Here Comes the Bride, No Stress in Sight 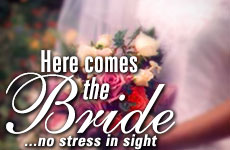 Jewish traditions leading up to the wedding alleviate last-minute jitters.

I love a good party, so when they announced a Shabbat kallah at shul last week, I showed up. It made no difference that I didn't know the bride, couldn't even pick her out from a crowd. A Shabbat kallah is always a great time, an all-female gathering to shower a bride with joy and blessings on the Shabbat before she marries.

By the way, in the religious circles where I travel, my coming to this event as a stranger isn't considered gate-crashing. Any woman who is disposed to add her joy to the party is encouraged to do so. (This open invitation doesn't extend to the wedding itself or hors d'oeuvres afterwards, however. Formal invitations are still de rigeur when the glass is smashed.)

The idea of the Shabbat kallah isn't just an old-fashioned gesture to increase a bride's happiness; it's a brilliant psychological ploy. Since emotions and anxiety can run so high the day or two before a wedding, the Shabbat kallah distracts the bride from last-minute jitters. (The groom has his own distraction through his aufruf at shul, where he recites blessings over the Torah reading and is then pelted with candies from the congregation.) Tributes to the couple's suitability by those who know them also reinforce the bride's reasons for taking this momentous leap into her married future.

Also, Orthodox couples usually don't see one another during the week before the wedding, adding to the bride's need for support. A friend of mine recalled how grateful she was for this: "My husband and I both reacted so differently to the emotions of that time," she told me. "He was a wreck and I was as calm as could be. It was okay for us to talk on the phone, but seeing each other so close to the wedding might have been disastrous."

This also probably explains why the bride and groom each have a shomer to keep them company in the twenty-four hours before the wedding: to keep them calm, assuage their anxiety, and help with any last-minute logistical issues, such as reminding them to eat.

The road to matrimony was pockmarked by detours, geographic dislocations, and emotional turbulence.

Anyway, this Shabbat kallah turned out to be the most memorable one I had ever been to outside of my own twelve years ago, when my emotions were the consistency of unset Jell-O. More than forty women crowded into the hostess' living and dining room to celebrate with Cherie, the bride. From the stories told by Cherie's close friends, mother, sister, and shadchan, (matchmaker) I realized that her road towards matrimony had been pockmarked by sudden detours, geographic dislocations, and emotional turbulence.

Apparently, Cherie had all but given up on the idea of meeting her beshert (destined one) in Los Angeles, until her rabbi insisted that she get over her recent dating debacles and agree to date again – soon. Then the phone rang again, almost instantaneously. This time the call was from a shadchan who twisted Cherie's arm to meet a guy named Dan. Cherie said that she could only attribute the number of "coincidences" involved in their meeting to Divine intervention. Dan and Cherie, despite their initial attraction, didn't glide effortlessly towards engagement. They even broke up one time, but both were so miserable that they reunited soon – after several "coincidental" meetings in Israel.

The hostess at Cherie's Shabbat kallah shared some words of Torah related to the idea of marriage, then invited other women to give Cherie some words of wisdom about marriage. Much of it was choice indeed:

On being a couple: Don't think of yourself as an individual anymore. You should be like one person in your goals, and always think of what is best for the other person in your decisions. The fact that you are still two individuals simply doubles the potential of what you can achieve together.

Her advice based on 61 years of marriage: Always make him feel that you respect him.

On the fragile male ego: Cherie's maternal grandmother offered this, based on 61 years of marital happiness: "Always make him feel that you respect him. It makes him feel like a man. And hold hands all the time." Other women advised giving a loving greeting to a husband returning from work. Quaint sounding, perhaps, but seemingly part of a proven recipe for domestic tranquility.

On fighting fair: Praise the things that you like your husband to do when he does them. Don't heap criticism on him when he exhibits what one woman called "non-optimal behaviors." Don't dredge up or pile on other unrelated complaints when you are dealing with one issue. One long-married rebbetzin suggested making a list of all the reasons you married him and keep it handy. "There may come a time when the stress of family life may make you say, 'I'm outta here,'" she said. "If that happens, take out that list and read it. Your husband will not have changed. Only your attitude will have." And of course, (this from Cherie's grandma), never go to bed mad.

On protecting the relationship: When you make your seven circles around your groom under the chuppah, the marriage canopy, remember you are carving out your private sphere as a couple. Protect that space from the onslaught of mundane essentials of everyday life. Remember that circle, enhance it, nurture it. Don't let six months escape and then realize you haven't gone out on a date in all that time.

The wellspring of love and enthusiasm for Cherie and Dan touched me deeply. The sage advice about marriage gave me a rush of loving emotions for my own husband, who I wanted to run home to so that I could hold his hand, like Cherie's grandmother had advised.

So thank you, Cherie and Dan, for having gone through all the emotional upheaval of the dating game so that you could arrive at this happy conclusion. Though your wedding, which is taking place as I write this, isn't a conclusion at all. It's only the beginning.

This article originally appeared in the LA Jewish Journal

The Deep Meaning Behind An Orthodox Jewish Wedding

Guide to the Jewish Wedding

5 Ways to Stay In Love Forever

The 5 Ingredients of a Great Marriage
Why My Iranian Mother Didn’t Want Me to Become a Religious Fanatic
The Jewish History of Prague
Why the Sexual Revolution was Bad for Women
Comments
MOST POPULAR IN Lifecycle
Our privacy policy
Aish.com Is Looking for Great Writers