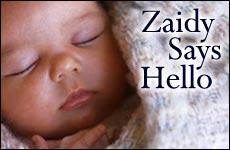 Advice to my newborn grandson on his first day on Earth.

My Dear Precious One,

While you are sure to hear those two words every year around this time, this is really the only time the greeting will be precisely true - today being the day you were actually born.

So welcome to the world!

How was the trip? Long? Scary? Confusing? I'm sure it was, though I don't remember mine too well. Don't worry, neither will you. That's just the way things are down here; lots of trips, loads of confusion and plenty of forgetting.

Permit me to introduce myself. I am your grandfather - your father's father. Some call me Zaidy - it's Yiddish. I'm the one who pretends to know everything, while others pretend to agree with me. That's probably because I pay the bills. Pretty soon you'll understand what I'm talking about.

Twenty eight years ago I wished your father a Happy Birthday when he completed his trip and today I have the privilege to do the same. I don't mind telling you it is quite a thrill. Having just returned from the hospital and seeing your 8 pounds and 11 ounces for the first time, I am filled with a special kind of joy that is most difficult to put into words.

I stood outside the nursery a few hours ago with my nose pressed against the glass, like two stuck page corners of a new, unopened book, for quite some time. I must have looked funny to you. Come to think of it, you looked pretty funny too. I just wanted to get as close as I could, I guess.

You were clearly the most beautiful baby there. Never mind that the other 'nose pressers' thought their babies were more special. What do they know? They were just jealous. And how mature you seemed, waiting patiently to be attended to and hardly complaining - unlike the girl next to you who was literally crying like a baby! I was so proud.

By the way, for your information, you are a boy. This is not insignificant, not only because I am one too, but because this evens out the score of the grandkids. You don't know them yet, but you've got some really cute first cousins and an adorable sister - which is important to keep in mind when you get home and she starts biting you.

While they didn't receive a welcome letter like this (Zaidy wasn't such a famous writer then), one day soon they will read this letter also and they will need to know that Zaidy loves them every bit as much as he does you. Somehow, grandparents never seem to run out of love.

You will find out soon enough that having a grandfather is a pretty cool thing. And, thank God, you are fortunate to have four grandparents - all of whom have been charged with the mission to spoil you rotten…and believe me, they will.

A word of caution, my little bundle: don't take this grandparent thing for granted. When I was growing up (take note - you will hear that expression very, very often), I only knew one grandparent. Bonpapa (French/Belgian slang for good father) was as passionate in his Judaism as he was in his love for his family. Born in Slomnick, Poland he moved to Antwerp during the Russo-Japanese War and there raised an exceptional family.

In 1942 they arrived in New York via France and Portugal and began the task of creating a new generation of distinction led by Bonpapa's fierce value system, fanciful wit, and obsession with truth and servitude. While in his early 90's, he became my roommate.

I missed out by having only one grandparent, but, believe it or not, most of my friends grew up without any grandparents at all. Our European parents had, by and large, lost most of their nuclear families in the War and came to these benevolent shores penniless, broken, and alone. So having a grandfather (especially one in his 90's) was very special. So was he. He didn't speak much, but he didn't have to. All I had to do was watch.

Even at that advanced age, he treasured every living moment and approached everything he did with incredible commitment and vigor. The way he prayed, the way he sipped his tea, studied the Prophets, played chess, guided his daughter (my mom - your great-grandmother) …even the way he watched wrestling on TV, gave me a sampling that always said, Life is precious. Never be lazy or indifferent. He taught me that having opinions is a good thing and to never be ashamed or reluctant to share them.

I still recall the day he told me he was going to die. He sat up in his bed, much the way I picture the narrative of our Forefather Jacob prior to his death, and he summoned me to sit beside him. He told me to fetch his Kiddush cup from the dining room breakfront. Like him, it was small, but very proud and shiny - and strong. Then, without sentiment or display of emotion, he held my hand firmly and stared deeply into my eyes. He explained that he would soon pass away, and he wanted me to own and use his Kiddush cup when he would use it no longer.

I was 23 at the time. When he reached 100 years old, two years later, I assumed ownership of this sacred silver heirloom. And I have lovingly held it every Friday night since then.

You see, my little newcomer, that's what Judaism is really all about - linkage. Just a few hours ago, your very new soul joined a very old chain… a chain that has been growing and glowing for 5,000 plus years. The chain is long and though it is tarnished in certain places, it remains as sturdy and convincing as it is durable and determined.

Many have tried to disintegrate this miraculous bond of conviction, beauty, and tradition, but no one ever has or ever will succeed - for so has God pledged.

You will discover, my beloved, that so unusual is this chain that despite the fact that every single link is made up of different material and hue, somehow it is indestructible. Oh, many have tried to interrupt and even disintegrate this miraculous bond of conviction, beauty, and tradition, but no one ever has or ever will succeed - for so has God pledged.

I recently spoke with a Chassidic Jew in his late 80's, who was a childhood friend of my father, of blessed memory. After retrieving several anecdotes of life growing up in Poland, his soft, pale-blue eyes became wistful as he recalled his years of tragedy in Auschwitz. He stroked his gleaming, white beard and peered out the window. He seemed to be gazing into a time long passed.

I lost everyone there…everyone. When the War ended, I was completely alone.

He paused and said nothing for a few seconds. The silence made me uncomfortable. Then he leaned forward on his bent swivel chair and whispered softly.

I cannot tell you the number, but today I have between 300 and 400 children, grandchildren and great-grandchildren. It is a miracle.

And now you are a part of that very same miracle - the miracle of survival - the miracle we call the Jewish People. Today, you take your place in this vaulted legacy and start your journey as yet another link in our priestly union. But unlike me and my little colleagues of yesteryear, you begin not only with loving and devoted parents, but also with the benefit of many adoring grandparents and even great-grandparents at your side.

I suggest you take full advantage of this benefit. Watch us. Learn from (much of) what we do and don't do. Ask us questions and don't accept vague or confusing answers. Request our help with your homework and with school projects. Pester us to play games with you. (We are notorious for letting you win.) Invite yourself over just to hang around for an hour or two and occasionally to sleep over... and bring your baseball glove with you. Call us on a cold, winter night just to say, Hi, what's doing? Fax us a copy of a great composition you wrote or a '98' (or even a '75') on a recent test. And every now and then, ask us about our lives when we were younger. We just love to reminisce.

It isn't fun to think about, but someday I'll pass that Kiddush cup on to you - or one of your cousins. Don't cry - that's just the way life is on this world. In a way, it's even a comforting thought. As I said before, it's all about the chain. And today that chain got just a little bit stronger.

The Jews of Italy

Peace in Israel: A Jewish Perspective
Can You Show Me This "God?"
How to Become Immortal
Judaism and Mental Health
Comments
MOST POPULAR IN Israel
Our privacy policy
Aish.com Is Looking for Great Writers