Talking to Our Children after Attack at Ariana Grande Concert 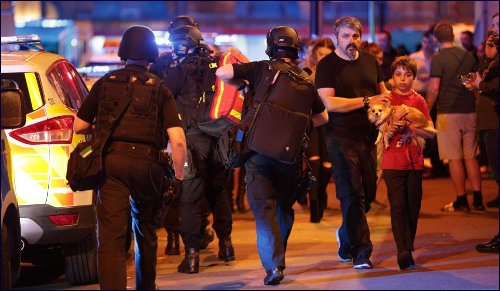 Terror just hit home. Here’s how you can help your children.

“Ariana Grande!” my daughter cried, “I like her – we all do!” As a group of horrified girls looked at their phones, I gazed at them. We were at a school event and my daughter, along with a dozen other teenage girls, were aghast.

They’d just heard the horrible news. Late Monday night, as young concert-goers started streaming out of an Ariana Grande concert in the British city of Manchester, disaster struck. A deadly explosion – some early reports suggest a suicide bomber might have detonated the bomb – tore through a rotunda area outside of Manchester Arena.

The bomb seems to have been designed for maximum destruction; as the powerful explosion tore through the area, nails shot out of the bomb, wounding scores of people. At least 22 people have been killed and 50 were injured, many gravely. Eye-witnesses reported seeing body parts strewn on the ground. As panicked concertgoers fled the arena, there was a stampede, potentially injuring even more young victims

One girl had friends in Manchester and wanted to text them. “The people there are like us!” my daughter cried, and I nodded, too emotional to speak. After each new terrorist attack, we try to reassure our children, try to sooth their fears and calm their anxiety at the specter of such evil in the world. With the attack at the Ariana Grande concert, we parents find ourselves in a more difficult position than ever before. Our children now realize that they were targets, that a concert given by a singer hugely popular with teens was the site of carnage. The horror of terrorism is hitting close to home.

How do we comfort our children after an attack like this? Here are three ways to speak to our kids in the aftermath of the attack.

1. Emphasize good in the world

One way to empower children is to show them ways that people refused to be cowed. Even as they came face to face with evil, many people caught up in the Manchester attack selflessly tried to help others.

One mother who’d been at the concert with her 13-year-old daughter told BBC News that there were “a lot of children in the building tonight. I was trying to offer my support to a number of girls who were there on their own who were hysterical. They were around my daughter’s age if not younger.”

Outside the concert hall, many people across the entire city of Manchester mobilized to help the concertgoers. Manchester closed its main Victoria Railway Station and a number of roads. Up to 21,000 traumatized concert-goers were stranded in the city with no way to get home. Taxis offered free rides and ordinary citizens offered to ferry people home. On Twitter, offers to help were trending. One typical Tweet said, “We have a spare double bed and two sofas available if anybody needs a place tonight. Salford area, 5 min taxi from arena”.

Showing our children that even in the most dire of situations there are people who try to help can give them hope. It can also help them realize that even when we cannot control the situation in which we find ourselves, we can choose how we respond.

When terror strikes, it’s natural to want to do something to help. A powerful message we can send our kids is that even if we’re far away and don’t seem to be immediately connected to the attack is that, we are indeed connected and that our actions are not only welcome but vitally necessary.

When my daughter and I first heard about the attack, we prayed right there in our car for the victims. It was a powerful way to feel useful and to also remind ourselves that we are part of a wider whole, that when other people are attacked, we all are harmed.

A traditional Jewish response is to commit to study or to perform additional mitzvot in memory of people who have died and in the merit of people who are sick or injured for a speedy recovery. Doing so helps us bring more goodness and light into the world, especially at times like this when it can feel like the darkness of a terror attack is overwhelming.

3. Don’t be afraid to call the attack evil

In the aftermath of terror attacks, the media and other individuals often try to imagine the grievance or motive behind it, making it somehow rational, that perhaps there is some kernel of merit in the terrorists’ grievances.

Seeking to understand terror attacks and refraining from condemning the attack with every fiber of our being sends a confusing message to our kids. It blurs the lines between good and evil and creates moral obfuscation. Kids need to feel that despite violence and horror, they live in an ordered world where there are clear rights and wrongs. In response to witnessing unadulterated evil, families need to strength in the illumination of good while grieving with their children, and work on bringing more of that light to the world.

There is nothing more horrific than the thought of children being targeted in a terror attack. As we learn more of this attack and the victims, we each can help our kids feel protected, loved and empowered. We can help them to regard themselves as part of a wider group of people who, even in the face of unspeakable evil, refuse to be defeated, and instead try to help

The Uyghurs: The Essential Facts Everyone Should Know
The Softball Player
How This 6 Generation Bread Baker Brought Back Israel’s Ancient Grains
Olivia Newton John’s Grandfather was a Nobel-Prize Winning Jewish Physicist
Comments