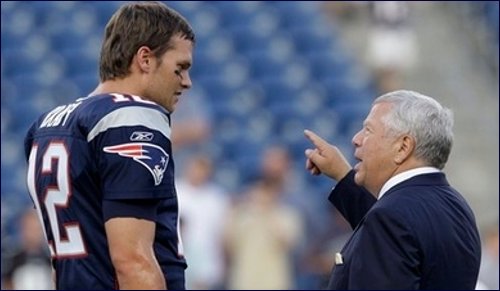 Including three Jewish owners and the Jewish general manager.

The Philadelphia Eagles and New England Patriots are facing each other in the 2018 Super Bowl. Both teams have surprising Jewish connections. Here are six facts you might not have known about Super Bowl LII.

For the third time since 2012, both Super Bowl teams have Jewish owners: Jeffrey Lurie of the Eagles, and Robert Kraft of the Patriots. In fact, a whopping nine of the NFL’s 32 team owners are Jewish, a testament to the deep love of football among American Jews.

Robert Kraft is known as a major Jewish philanthropist. The CEO of the Kraft Group, Robert has donated over $100 million to charity, many to Jewish causes. The Hillel at Columbia University, his alma mater, is housed in the Kraft Center for Jewish Student Life. Its beautiful facade is covered in golden Jerusalem stone and brings a taste of the Holy Land to Manhattan. 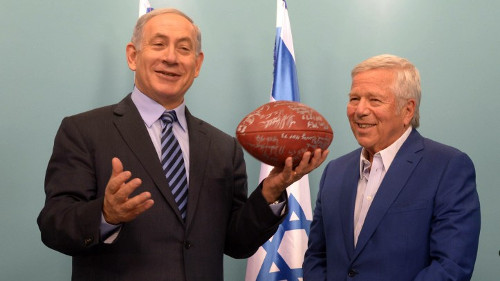 Robert grew up in an observant home in Brookline, Massachusetts. His father Harry was a dressmaker who also taught Hebrew School in the Krafts’ synagogue, and wanted Robert to become a rabbi. In high school, Robert never played on sports teams because he didn’t want to attend games on Shabbat. As an adult, Robert and his late wife Myra became philanthropists, supporting dozens of Jewish and non-Jewish causes throughout the United States and Israel.

The couple had a particular affinity for the Jewish State, investing in Israel and even sending players from Patriots to tour the country on numerous occasions. Jerusalem’s new state of the art sports stadium is the Kraft Family Stadium, a tribute to Robert and Myra’s generosity. Myra also supported Israel’s national women’s flag football team, supported Ethiopian immigrant absorption projects in Israel, and helped Robert encourage Boston to be a sister city with Haifa.

Philadelphia Eagles owner Jeffrey Lurie is also Jewish. He describes himself as primarily culturally Jewish, though he does seem to cling to one Jewish tradition: every year, he makes the track to his father’s grave in the Temple Israel Cemetery near Boston, honoring his father’s memory and legacy. There, he pours out his heart, silently speaking to his father, reviewing all that’s going on with his life, and communing with his father’s memory. Jeffrey Lurie’s father died when he was just nine years old; for decades, Jeffrey has kept up the tradition of visiting his Jewish cemetery.

In the run-up to the Super Bowl, one 99-year-old Jewish man has emerged as the Philadelphia Eagles’ superfan: “Philadelphia Phil”. Phil Basser attended his first NFL game in 1936 and has been a die-hard Eagles since he was 15 when the Eagles became a team in 1933. He follows the fortunes of his beloved Eagles weekly, often taking a nap before games now so he can stay awake. 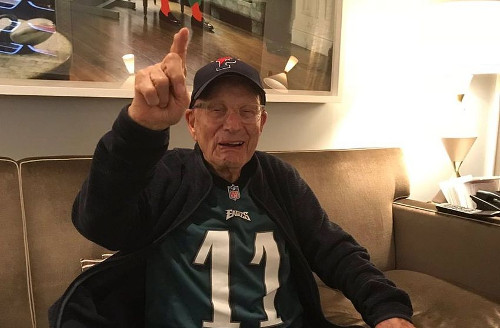 During the Vikings-Eagles playoff game January 21, 99-year-old Vikings fan Millie Wall attended her first playoff game and became a social media sensation. Phil Basser’s 18-year-old grandson, Josh Potter, responded with a tweet about his grandfather, noting that he was a staunch Eagles fan: “Looks like we got a battle of the centenarians!” Josh wrote, and his post soon went viral. Within days, Phil Basser appeared in Sports Illustrated, was interviewed on the local news, and became a social media sensation in his native Philadelphia.

Born into a poor Philadelphia Jewish family in 1918, Phil’s mother died when Phil was just four years old. His sister died when he was eight. Unable to make ends meet, Phil’s father entrusted him to a local Jewish orphanage during the week, bringing him home only on weekends. Phil went on to serve overseas during World War II and also served during the Korean War. 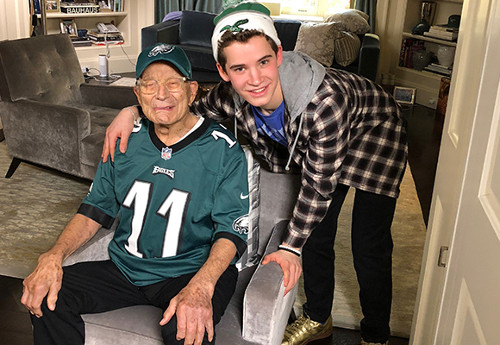 Grandpa Phil and his grandson Josh

After his military career, Phil founded an advertising agency in Philadelphia and had a successful career. He and his wife Pearl had four children and 14 grandchildren. After Pearl died last year, Phil moved to New York to live with his daughter. Nevertheless, he remains an Eagles fan and plans to attend the Super Bowl, his first ever. “One could look at my life and see the hurdles and the tragedy,” he told the Philly Voice. “These were all devastating, but I choose to wake up each and every day seeing the best that life has to offer.”

For only the third time in NFL history, not only are the owners of both Super Bowl teams Jewish, but so is the owner of the team in whose stadium the big game will be played: Mark Wilf of the Minnesota Vikings. Wilf’s parents are Holocaust survivors, and he recalls, “They always were tremendous Zionists and had a tremendous love of Israel, but also just such a love of America – what it has meant for our family, what it has meant for the world.” 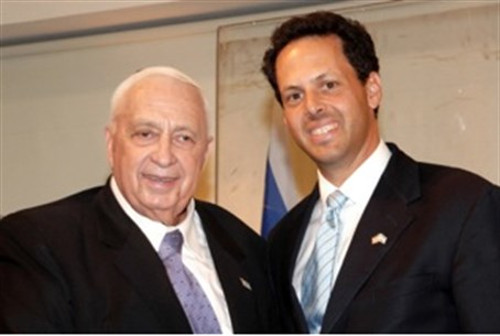 When Mark and his brother were kids, he recalls feeling crushed when his beloved childhood team (the New York Giants) would lose. His father would say, “Look at it this way, things could be worse. You could be the owners.” Mark laughs warmly at that memory today.

Over the past 50 years, the Wilf Family Foundation has donated over $200 million to Jewish and Israeli causes. The Wilfs are some of the main benefactors of Yad Vashem in Jerusalem, and have endowed the Wilf Children’s Hospital at Shaare Zedek Medical Center in Jerusalem, the Harry Wilf (Independence) Park in Jerusalem, the Wilf Campus at Yeshiva University in New York, the Wilf Center at the Jewish Family Service complex in New Jersey, and many other causes.

Visitors flying to Minneapolis for the Super Bowl will view a powerful Jewish-themed exhibit when they arrive in Minneapolis-Saint Paul International Airport: “Transfer of Memory”, featuring 44 photos of Holocaust survivors from the Minneapolis area. The powerful exhibit has been touring since 2012, and was installed in Minneapolis’ airport for the period leading up to the Super Bowl. “Given the incredible amount of people who will be coming through the Twin Cities area, it’s an issue that needs increased awareness, not just in the Jewish community but in society in general,” Mark Wilf said of the Holocaust installation.

The Eagles’ General Manager, Howie Roseman, is Jewish, and in recent years he has also personified a key Jewish teaching: a willingness to learn from past mistakes. After volunteering with the Eagles as an unpaid intern straight out of law school, Howie was eventually appointed the team’s youngest ever General Manager at age 35. He made a number of trades, more than any other manager in the league, but many of his decisions failed to pay off. In 2015, he was relieved of his duties, and was only reinstated a year later, when he began to shape the team that would eventually head into the 2018 Super Bowl. 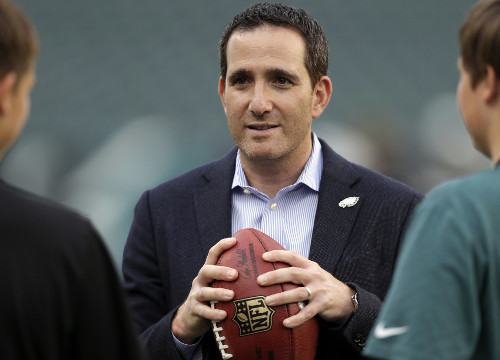 Despite his professional vindication and being voted NFL Executive of the Year by the Pro Football Writers Association, Roseman has been modest about the Eagles’ success, stressing the efforts of his coworkers and players and eschewing interviews. Whatever the results of Super Bowl LII, Roseman’s newfound willingness to learn from his mistakes and his current modesty in the face of success is an example for everyone in the game.

With fans flying into Minneapolis from all over the world, Minneapolis’ Jewish community has opened their doors, offering Shabbat hospitality the day before the big game.

“We bleed purple around here,” explains Wendy Khabie, the marketing director of Darchei Noam, an Orthodox synagogue in Minneapolis, referring to her community’s deep ties with the Minnesota Vikings. Even though many are still disappointed that the Eagles beat the Vikings to gain a spot in the Super Bowl, her synagogue has announced it is opening its doors to any fans in town for the game. About a dozen fans have already called the synagogue, making arrangements for Shabbat services, meals and socializing.

With tensions between Philadelphia and New England running high, some Jewish communities are placing bets on the outcome – with local charities the big winners. Philadelphia’s Congregation Rodeph Shalom and Boston’s Temple Israel – which Eagles owner Jeffrey Lurie attended as a child – have made a wager. The synagogue whose team loses will donate 18 times the point difference in the game’s final score to charity, and both synagogues are urging members to donate individually as well.

In California, two rabbis who work ten miles apart but who hail from Boston and Philadelphia, have entered into a very public wager: the loser will bring delicacies from their hometown (Philadelphia soft pretzels or Dunkin Donuts, which originated in Boston) to the Saturday morning kiddush of the other congregation. As the big game gets closer, the rabbis, Paul Kipnes and Joshua Aaronson, have also pledged charitable donations if their teams lose. And at Berman Hebrew Academy in Rockville, Maryland, Headmaster Joshua Levisohn has made a wager with school President Dave Sloan, promising the students Boston Creme donuts (if the Patriots win) or Philadelphia soft pretzels if the Eagles emerge victorious. 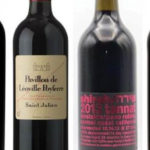 Kosher Wine: The Rise and Fall of Manischewitz1 min read 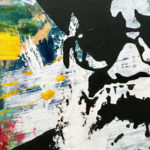