A Super Bowl to Remember 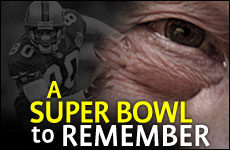 God had some other plans for me that day besides watching TV and stuffing myself with popcorn.

I watch only one football game a year: the Super Bowl. Even though I rarely know who is playing, who the favorite is or much else about the game, I really do look forward to this once-a-year slice of Americana.

A few years ago, I found myself at my in-laws in Florida on Super Bowl Sunday. It was mid-winter vacation and my wife Judy and I were there with all the kids. For weeks leading up to the vacation, my father-in-law and I bantered on the phone about watching the big game together, and now the big day had arrived.

Though I am a total health-food nut and rarely eat junk food or drink liquor, that morning I went out and stocked up on potato chips, popcorn, pretzels and beer.

"My son-in-law is a rabbi! And he is visiting us right now from New York!" My alarm bells went off.

I hunkered down in the living room with my father-in-law and my sons, watching the pre-game shows, boning up on the pre-game stats, and getting an early start on the junk food. The phone rang and my mother-in-law answered from the kitchen. I could hear her muted voice, but I wasn't paying much attention until I heard her exclaim, "You won't believe it, but my son-in-law is a rabbi! And he is visiting us right now from New York!"

IS THERE A RABBI IN THE HOUSE?

My mother-in-law hung up and came into the living room to explain. An acquaintance from the tennis club, a woman who is a hospice worker, had turned to her for help. It seems that a Jewish patient was dying of Lou Gehrig's disease. All his vital organs were shutting down, and it was only a matter of days, perhaps hours. The hospice worker was trying to help him prepare for the end and fulfill his dying wishes. He had asked her to summon his son, his ex-wife, and of course, a rabbi. Any rabbi willing to come would do.

This being Florida, it shouldn't have been hard to find a rabbi. Or so the hospice worker thought. Except for one thing: Super Bowl Sunday. Apparently, I was not the only rabbi who decided to take the day off and watch the game while clogging his arteries with super-saturated fat-snacks. The only difference, it seemed, between me and all the other Florida rabbis was they had answering machines they could ignore, and I had a real-live mother-in-law answering the telephone ever so cheerfully.

My mother-in-law was very excited by what she considered to be an amazing coincidence. A woman she hardly knew, and who certainly had no idea what her son-in-law did for a living, called her looking for a rabbi to help a dying man on the very day that the son-in-law happened to be visiting! I was neither impressed nor amused by the coincidence. I just couldn't believe that God had other plans for me that day. I did what any responsible Jew would do with the Super Bowl about to start -- I told her to tell this hospice worker to check the yellow pages. There had to be dozens of rabbis listed. If she couldn't find anyone else, she should call back.

And call back she did; no one was answering the phone. Reluctantly, I had to admit that maybe, just maybe, God had some other plans for me that day besides watching TV and stuffing myself with popcorn. My father-in-law drove me over to see the dying man.

I knew nothing about Lou Gehrig's disease, but I was stunned by what the hospice worker told me. It is a disease of the central nervous system -- named for the famous baseball player Lou Gehrig who succumbed to it -- which gradually destroys the body while leaving the brain intact. The victim slowly loses the use of his hands, legs, kidneys, bowels, larynx; he cannot write, eat, wash, walk or talk. The process is painfully slow; it takes years as the body shuts down. It is like being buried alive slowly, day by day. But the brain is painfully alert the whole time.

The information hardly prepared me for what I saw when I walked into the dying man's room. He was propped up in a hospital bed with tubes going in and out of his body, now flowing with blood that his kidneys could no longer cleanse. I greeted him warmly as I walked over to his bedside. He didn't respond. I repeated my hello and then noticed his lips moving, but just barely. His vocal chords and larynx had shut down so all he could do was whisper a word at a time, pausing after each one to muster up the effort for the next.

The rasping sound of his breath cut through my core even deeper than the searing sound of the shofar.

I put my ear right up against his mouth in order to make out what he was saying and even then it was exceedingly difficult to understand him. I took his hand. There was no reaction -- his arms, hands and fingers were lifeless flesh which no longer sensed anything; they lay like atrophied sticks beside his brittle frame. I listened intently as he forced out the words in a hoarse whisper. The rasping sound of his breath cut through my core even deeper than the searing sound of the shofar.

I muttered something comforting in reply. But he wanted to go on.

His declaration was so poignant. He wanted to make it to a rabbi, as if convincing me would somehow convince God: "Though I never went to shul, I was a good man. No one ever sued me."

I couldn't think of anything adequate to say. I felt his pain. His aloneness. His fear. I felt how deeply he wanted to be remembered at his death as a good man. Tears were rolling down my cheeks.

His ex-wife was there stroking his head. They had reconciled already. Whatever hurt or anger had led to their divorce -- all that was forgotten. She was comforting him as tenderly as she could. I wondered if at this moment they wished they had acted differently in the past.

His son was waiting in the living room. They had not spoken in years. An argument no one clearly remembered. I explained to the dying man the importance of making peace, of asking for forgiveness and of forgiving. He understood. I went out to the living room and explained the same thing to his son. I suggested to the son that he go in to see his dad and set things straight.

I stayed outside with my father-in-law while the son visited his father. Sometime later the son called me back in. They had reconciled. All I could think of was what a shame they hadn't done it years earlier.

I explained the importance of saying Vidui, the confession of our sins that we say on Yom Kippur and prior to death. I said it with him. More tears -- at least mine. It seems that Lou Gehrig's disease inhibits the tear ducts from functioning. He seemed to be all choked up but not able to express any emotion.

I explained the importance of saying the Shema at the end of life -- our effort to get clarity one last time -- that all that counts is God, that God is all there is. The Shema – "Hear O Israel, the Lord our God, the Lord is One" -- is the Jewish people's "One Minute Manager," our synopsis of what the essence of life is all about.

He looked up at me and I saw the pain in his eyes. I said each word of the Shema slowly, one word at a time, and in his hoarse whisper, he repeated the words after me. We finished and I hugged him. I told him that I loved him and that God loved him, and that he should know that I was sure he was a good man.

I said goodbye and left him with his wife and son. My father-in-law and I went back home.

The next morning the hospice worker called. He had died that night, towards dawn. I was angry with myself -- I should have gone back there to be with him at the moment of death. To this day, I can't forgive myself for not doing that.

I don't remember who won the Super Bowl, much less who played. But I will never forget that Super Bowl Sunday.

Early Existential Perceptions
Why My Iranian Mother Didn’t Want Me to Become a Religious Fanatic
The Jewish History of Prague
Why the Sexual Revolution was Bad for Women
Comments
MOST POPULAR IN Spirituality
Our privacy policy
Aish.com Is Looking for Great Writers