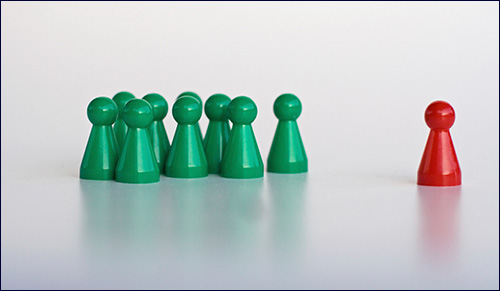 A proud polio survivor, I was blissfully unaware of the stigma many attach to paralysis and deformity. Until I wanted to start dating.

It was only later, on the cusp of adulthood, that – on all three fronts – I was rudely awakened. Against my will, I became a warrior. And nowhere did the battle rage more fiercely than at the intersection where all three identities converged: the dating front.

I had battled exclusion before. I always won. The movie theater, the restaurant, the concert hall, the university, the world of work: they had dispensed my basic training. This time the barricades wouldn’t budge. When it came to marriage, so central to my Orthodox Jewish upbringing, I seemed destined to remain on the sidelines forever.

When it came to marriage, I seemed destined to remain on the sidelines forever.

With every passing year, I searched more and more frantically for someone, anyone, who believed – as I did – that I would marry. It’s not that my parents didn’t believe it. When I asked, they assured me that they did. But I didn’t want to ask. I wanted their words to reach me unbidden. I wanted to hear unshakable conviction, even righteous indignation, in their voices. I didn’t.

One day, I heard a lilting song about Vincent van Gogh on the radio. It became a life preserver.

What you tried to say to me,
And how you suffered for your sanity,

And how you tried to set them free.
They would not listen, they did not know how.
Perhaps they’ll listen now.

Surely I couldn’t be the only sane one in my world. And if I were, I refused to believe that the world expected me to embrace its insanity. I often found myself humming a strident, long-forgotten folksong I had known since childhood, I Don’t Want to Get Adjusted to This World. If being well adjusted meant adjusting to society’s maladjusted view of life with a disability, I’d stay maladjusted, thank you very much.

Happily, a paperback book on my friend’s living room shelf enabled me to do just that.

It almost escaped my notice, that’s how slender it was. But like candy, its spine’s graphic design – pink and orange against a black background – caught my eye and whetted my appetite. Equally diminutive was its title: Stigma. But its author, sociologist Erving Goffman, was an intellectual giant.

Stigma: a little word whose meaning I did not know. Goffman wasted no time enlightening me: Stigma is an “attribute that is deeply discrediting” and that reduces the bearer “from a whole and usual person to a tainted, discounted one.”

Goffman postulated that a stigmatized individual may consider himself “normal,” a human being like everyone else. At the same time, he may detect – and not without reason – that others do not accept him. And the kicker: As a product of the same society whose members stigmatize him, the stigmatized person subscribes to many of its attitudes, making him “intimately alive to what others see as his failing, inevitably causing him, if only for moments, to agree that he does indeed fall short of what he really ought to be.”

Time and again, I saw myself in Stigma’s pages, never more cathartically than in Goffman’s excerpts from The Little Locksmith, the 1943 memoir by Katherine Butler Hathaway, with whose scoliosis I thoroughly identified.

When I got up at last… and had learned to walk again, one day I took a hand glass and went to a long mirror to look at myself… That person in the mirror couldn’t be me. I felt inside like a healthy, ordinary, lucky person – oh, not like the one back in the mirror!

The discrepancy between Hathaway’s body image and her mirror’s reflection reminded me of the time my cousin Avrumi took me to a New York Knicks game at Madison Square Garden. After the game, we were waiting outside the Garden for my taxi to arrive. Traffic was horrendous and at least fifteen minutes went by – and still, no cab. Then, all of a sudden, I saw Avrumi lifting a wheelchair into the trunk of a yellow taxi.

“No!” I called out to him in alarm. “The car we’re expecting is dark blue!”

Bewildered, Avrumi turned toward me, the wheelchair in midair. “But this is not your wheelchair.”

Equally bewildered, I looked down. Avrumi couldn’t have been lifting my chair; I was still sitting in it.

Reading Stigma at age 20 clarified why, unless society holds its “mirror” up to my face, I often have no idea that I am sitting in a wheelchair. It’s almost as if the chair is so much a part of me that I don’t even know it’s there. That night waiting outside Madison Square Garden, I actually thought I was standing.

Nourished by Goffman, determined to fight stigma tooth and nail rather than internalize it, it was disheartening that with every passing year, my chances for love seemed to dwindle. When I was 28 years old, my tender Tante Miriam helped me get dressed for the very first time. Several hours later, cheeks blushing, eyes luminous, she confided, “I never realized how attractive you are. I told Uncle Moshe that I can envision a man wanting to marry you.” My confidence boost was short-lived. What did it matter what Tante Miriam could envision, what I could envision, if a man could not?

Two years later, in 1982, Steven Spielberg’s E.T.: The Extra-Terrestrial was released. The theater lights dimmed and soon I saw two elongated, reptilian fingers rising ominously. They pulled down a branch, juxtaposed against a globe of light glowing in the night sky. Those fingers terrified me. They disgusted me. And based on the audience’s collective gasp, I knew I wasn’t alone. Then, magic. Gradually, the fingers became far more than tolerable. They were lovable. Loving. Life-giving. It occurred to me that mine were too.

Within the year, I met and married my husband.

Two are Better than One
Why Are The Prayers Of Yom Kipur So Repetetive?
Ha'azinu 5783: A Time for Unity!
Twisted Thinking
Comments