Because You Are Jewish

I was 8 years old living in Czestochowa, Poland, when my mother told me I was Jewish. That was the beginning of my quest.

I was born in Czestochowa, Poland, in 1988. Since there were no Jewish schools in Poland at that time, my mother sent me to public school. When I was 8 years old I came home and I told my mother what the teacher told us that day: “Mom, tomorrow we can’t eat meat, we are going to church and the priest is going to pour ashes over our heads.”

My mother looked at me and said, “If you don’t want to eat meat tomorrow, no problem, but you will not go to church.”

“Because you are Jewish.”

That's when I found out for the first time that I was Jewish. But I didn’t understand what it meant to be a Jew. All my friends from school would go to church and I was the only one who didn’t. When I was asked which church I belonged to, I would lie and make up a name. I once told my best friend that I was Jewish and the next day a bunch of kids called me a “dirty Jew.” That taught me to keep my mouth shut and not to tell anyone my secret. 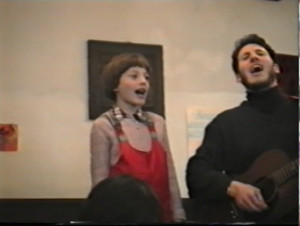 For many years, my parents and I would attend a summer and winter Jewish camp in Poland called The Lauder Camp. Jewish families across Poland would spend a few weeks learning about Judaism. The camp was for all three generations of Polish Jews: the Holocaust survivors, their children and grandchildren. It was refreshing to be in a place where I didn’t have to hide my true identity. Everyone there was Jewish and everyone felt comfortable. 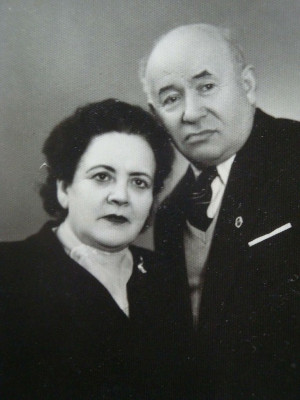 My mother was my other source for Jewish education. She was a child of two Holocaust survivors. It was very hard to keep anything Jewish after the war, but they did the best they could. My mother’s mother lit the Shabbos candles, and my mother’s father made Passover Seders. On Rosh Hashanah and Yom Kippur my grandmother would take my mother when she was a little girl to the “Congregation,” an old building in Czestochowa that housed the mikveh before the war. My grandfather used to do kapparot at home with my grandmother and my mother and would then bring the chickens to the shochet. Whatever they did after the war – even though it was hard for them – that’s what my mother knew, and that’s what she taught me. 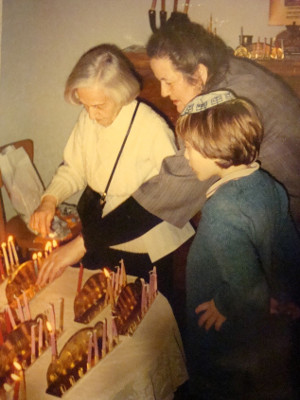 My mother and me, with an older Jewish woman, lighting the menorah in Czestochowa.

Since 1974 my mother has been working for the Social and Cultural Society of Jews in Czestochowa. Throughout the years, she worked hard to teach those Jews who were left in Czestochowa about the Jewish holidays. She organized events, inviting the actors from the Jewish theater in Warsaw to come to Czestochowa, hosting famous artists, writers, musicians, etc. At this Jewish Center I learned a lot about Judaism, but it was not enough for me. I wanted to learn more.

When I was born, there was no mohel living in Poland so I couldn’t have a bris when I was 8 days old. Therefore, I was never circumcised. Rabbi Schudrich told my mother that I need to have a bris and that he will arrange everything. A few days later, we got a phone call that the mohel – Rabbi Fisher, from Monsey, NY – will come to Poland just for me so that I can have a bris, and that we should come to Warsaw where it will take place.

It took us three hours by train to get to Warsaw. We got to the Jewish quarter and entered the Nozyk Synagogue, the main synagogue in Warsaw, where Rabbi Schudrich informed us that unfortunately Rabbi Fisher was unable to come – something went wrong with his flight. We turned around and went back to Czestochowa. A few days later, we got another phone call from Rabbi Schudrich. He ensured us that this time Rabbi Fisher would be able to come. So we traveled back to Warsaw.

We went to the Jewish theater, not far from the synagogue, to eat and met my mother’s friend. She asked us what we were doing in Warsaw and my mother told her about the bris. Her friend took me aside and tried to convince me not to do it. She said that it’s like cutting off my arm. I thanked her but I told her that I was a Jewish boy, and if a Jewish boy has to have a bris – I’m having it! 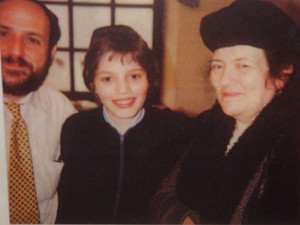 With Rabbi Schudrich and my mother, after the bris.

We went to the synagogue and met with Rabbi Schudrich and Rabbi Fisher. That day was a day after the yahrtzeit of the famous Rabbi Elimelech of Lizensk, Poland. Thousands of Hassidim were coming back from Lizensk and before going to the Warsaw airport, some decided to visit the synagogue. They saw that something was going on there, and one of the Hassidim became my sandek. His name was Rabbi Yaakov Yossef Neushloss. Afterwards, we were dancing in a circle and my sandek asked me for my contact information. I gave it to him and my mother and I went back to Czestochowa.

A few months later I had a bar mitzvah in a yeshiva in Kishinow, Moldova, where for the first time I learned the Hebrew alphabet so I could read the Torah blessings for my aliyah. The rabbis at that yeshiva discovered that I love music, and offered me a private music teacher if I stay in the yeshiva. I was only 13 years old and I didn’t want to stay by myself in a foreign country, so I went back to Poland with my mother.

The Jewish Community of Warsaw invited us to join them for the High Holidays. We stayed in a hotel and I asked Rabbi Schudrich if he could help me come to Warsaw so that I could learn in the Lauder Jewish School there. I told him that there was not much of a Jewish life in Czestochowa. “I’m in a public school, there is no synagogue in Czestochowa.” A few months later, Rabbi Schudrich called to tell us that he found us a place to stay and that we could come to Warsaw. I was 14, in the middle of 8th grade, and my mother and I moved to Warsaw for a year and a half. 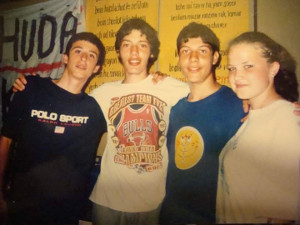 With campers at the JDC Camp in Sarvash, Hungary. I am second from the left.

In the Lauder school, I learned Jewish history, Jewish culture, and Hebrew language, but not Torah. After school I had a private teacher who taught me how to put on tefillin and he got me a pair of tzitzis. I worked on my Hebrew reading and started to pray, but only on Shabbos. I started to keep Shabbos and kosher as much as I could.

Sometime during that year my sandek, Rabbi Neushloss, called me. He was in Poland and wanted me to join him for a tour marking the yahrtzeit of Rav Elimelech of Lizensk. He sent me a private driver to pick me up, and a bus full of Hassidim was waiting for me. After a whole day of driving, we got to our final destination – Lizensk. There I spent the most amazing Shabbos of my life. The streets of Lizensk were filled with Hassidim. I felt like I was in a different world. Thousands of Hassidim ate together, sang together, and danced together. The whole floor was shaking! It was an unbelievable experience. 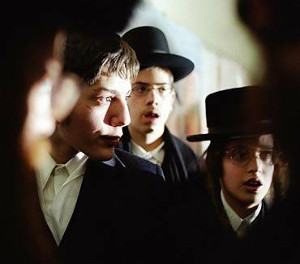 Me at the grave of Rabbi Elimelech of Lizensk, Poland

When we got back to Warsaw, Rabbi Neushloss invited me to join him and his family for Passover in Monsey. I answered, “Sure,” but I had no idea how I would be able to pay for the ticket. I thanked him for everything and said goodbye. Sometime before Passover, Rabbi Schudrich told me that Rabbi Neushloss sent me a plane ticket. 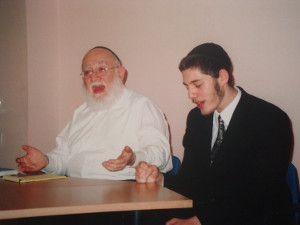 Singing with Rabbi Leiber at the Lauder Camp

I spent a beautiful Passover there and I also visited Rabbi Lieber who taught me at the Lauder Camp in Poland. I told the rabbi that I was in the Lauder Jewish School but I didn’t know where to go after my graduation since there were no Jewish high schools or yeshivas in Poland. He told me that he would try to look for something for me.

In my last year in the Lauder School, right before the summer, I didn’t know what to do. All my friends were applying to different high schools and I was waiting for a phone call from Rabbi Lieber. Finally, a month before the summer, I got a phone call that I could come to a yeshiva in America. I got a visa and left Poland at the age of 15. I started learning in the Bobov Yeshiva in Boro Park. I learned there maybe for a month before switching to the Talmudical Academy of Baltimore. 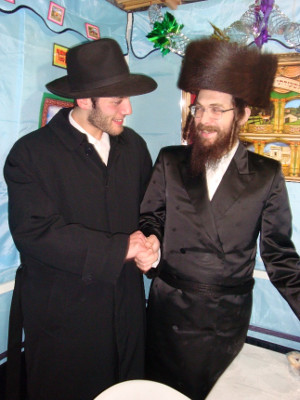 With Rabbi Neushloss in his sukkah

After graduating from the Talmudical Academy of Baltimore, I went to Yeshiva Sh’or Yoshuv in Lawrence, NY, where I am today. 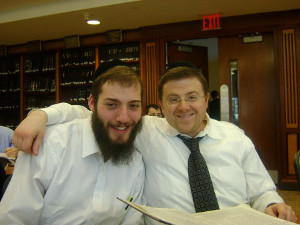 Living as a Jew in Poland was not easy. I tried to put all the puzzles together but I was missing so many of the pieces. Today, thanks to many great people and of course to God, I fully understand what it means to be Jewish. I am forever grateful to my mother for letting me leave Poland to study in a yeshiva, even though I’m her only child, and to all the people that made my dream come true.

A version of this article originally appeared in The Jewish Home.

Yaakov Wasilewicz studied in yeshiva from 2008 to 2017. He has completed higher education in Psychology and Education at the University of Touro in New York. He also studied at the Belz School of Jewish Music at Yeshiva University, training his voice under the direction of the world-famous cantor Joseph Malovany. Yaakov is a composer and singer of Jewish songs in Hebrew and English and writes occasionally for various Jewish publications. He can be reached at jakub.wasilewicz@gmail.com

Why This Jewish Billionaire Keeps Shabbat